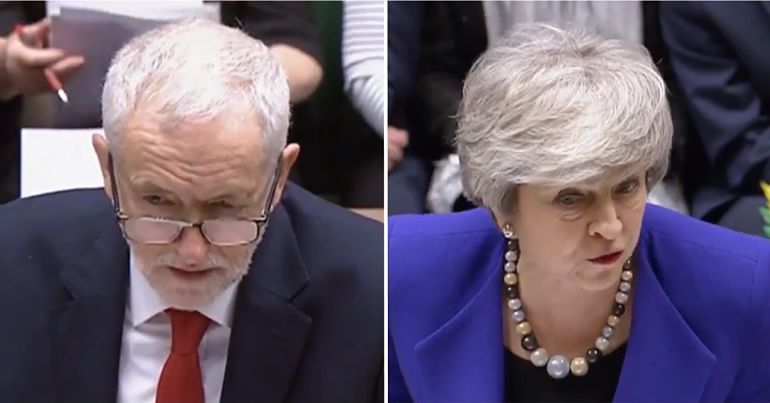 Prime Minister’s Questions (PMQs) on 30 January was yet another day of Theresa May spouting waffle on Brexit. But Jeremy Corbyn appeared to have had enough. And in a fiery one-liner, he shot back and summed up what everyone’s thinking about her plans:

None of that was very clear to me, I don’t know about anyone else.

"Well, none of that was clear to me, I don't know about anybody else…."

Jeremy Corbyn sums up the mood of the nation. #PMQs pic.twitter.com/FhBF4u8Jb8

The one-liner came after Corbyn asked May if she was renegotiating her deal to sort out alternative arrangements for the backstop:

Could she set out today what these alternative arrangements might be?

You can watch May’s full response below. She lists some proposals that other MPs have come out with. Unfortunately for May, there’s one problem even with her waffle – the EU has said that it will not reopen negotiations over the backstop. It’s therefore little wonder that Corbyn came back at her with such a no-nonsense response:

Following on from his one sentence destruction of Michael Gove yesterday, it was Theresa May’s turn to face a Corbyn burn at #PMQs today pic.twitter.com/82dhJLk5RQ

Corbyn’s one-liner was greeted with cheers from the chamber. People on social media appeared to agree, saying that Corbyn was “speaking for the nation”:

.@jeremycorbyn 🔥 speaking for the nation, when he says: “None of that was clear to me, I don’t know about anybody else.” @theresa_may tying herself in knots, desperately trying to look like she’s in charge of this runaway train. #PMQs #BrexitShambles pic.twitter.com/6rYZ3e0BiV

The end of this video summed up how a lot of people felt:

Jeremy Corbyn dismantles Theresa May with one line at #PMQs… watch this til the end🤣 pic.twitter.com/OcPtjZulob

It wasn’t just this question where Corbyn was on fire. He also pinpointed a major flaw in May’s Brexit plan, asking:

This morning… the Brexit… minister said that alternative arrangements means looking at technology… So can the prime minister be very clear what technological advances is she expecting to be made in the next 58 days?

Jeremy Corbyn: If technology is the answer to the Irish Border, what new technological advancements do you expect to be made in the next 59 days?#PMQs pic.twitter.com/xiTTbXTXiQ

The House of Commons vote on 29 January to support a deal that gets rid of the backstop was touted as a triumph for May. But with the EU adamant that this isn’t an option, it’s a fantasy Brexit; one where MPs get to stick their fingers in their ears and chant blah blah blah without touching base with reality.

Corbyn’s question and his response show that he isn’t fooled by this posturing. And neither is the rest of the nation.