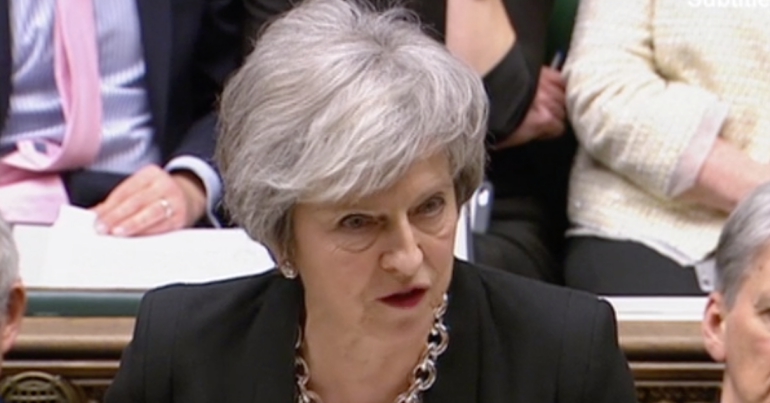 Theresa May’s position on Brexit is becoming more ludicrous by the day. On 29 January, May announced that she will talk to EU leaders about reopening negotiations.

This might seem like a good way forward if it wasn’t contrary to everything she’s ever said. Or contrary to what the EU’s repeatedly said. In fact, to a casual observer, it could even seem like she’s willing to say anything to avoid what should happen when parliament is deadlocked – a general election.

Speaking in the House of Commons during the Brexit debate on 4 December 2018, May stated:

Don’t imagine if we vote this down, a different deal is going to miraculously appear. The alternative is uncertainty and risk.

May delayed the first Brexit vote after it was clear she couldn’t win. One minister claimed she was going to “head to Brussels to push back on the backstop”.

I have no mandate to organise any further negotiations. We have to exclude any further opening of the withdrawal agreement.

So May trotted home without a Plan B and her deal was defeated by 230 votes – the largest defeat of a sitting government in parliamentary history. Now it appears that May thinks she can reopen negotiations. And that somehow she can work miracles that were seemingly impossible just a month ago.

It’s getting to the point where May looks like she’d be willing to promise unicorns shitting glitter if it would win her a few votes. Although that’s pretty much what Boris Johnson and team Leave did when he travelled the country promising millions for the NHS if people just ticked a little box saying they wanted Brexit.

But this is a big part of the problem. So much of what many MPs and people want is based on a Brexit fantasy that doesn’t exist: some cosy arrangement where we get everything we want, a bucket full of cash, and get to say ‘fuck you’ to the EU all at the same time. And oh, there’s a massive surprise, that’s not a deal the EU wants.

Meanwhile, people are suffering. In November 2018, Philip Alston, the UN special rapporteur on extreme poverty and human rights, found that Conservative Party policies were causing poverty and “misery” for thousands of people. Record numbers of people are homeless. Our schools are in crisis. The NHS is on its knees. The list is endless.

It’s time for May to stop fantasising. Because it’s not just about Brexit. It’s time to stop playing games and give the people a real say in what they want for this country. It’s time for a general election.