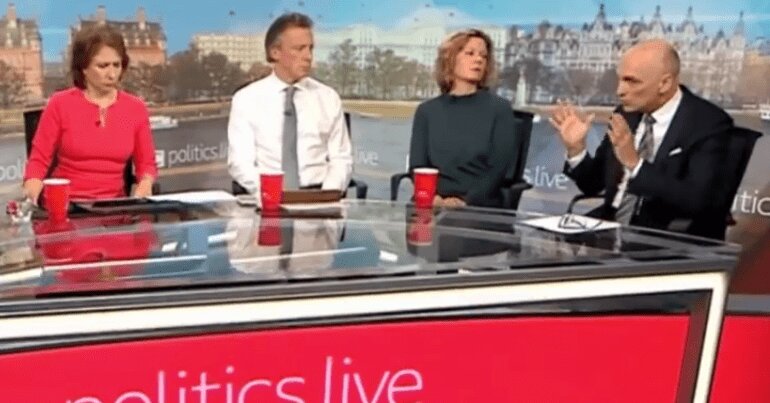 Up against five adversarial pundits, Labour MP Chris Williamson fought his way out of a ‘debate’ on Venezuela on BBC Politics Live.

The pundits were discussing whether Donald Trump and other states were right to recognise Venezuelan opposition leader Juan Guaidó as president, instead of sitting president Nicolás Maduro. On 29 January, Blairite Labour MP Rachel Reeves led the charge against Williamson, saying:

I don’t see how anyone can believe that Maduro should stay in his position… The only basis that anyone says that he should be there is that he won an election. It was a rigged election; it was a fake election… Juan Guaidó… won an election, being recognised by Germany, by France, by Australia, by Canada, by the UK as well. And he should be given a chance to turn around his country.

But Williamson countered the false narrative that the election was “rigged”:

"It was a rigged election. It was a fake election” Labour's Rachel Reeves on Maduro.However Chris Williamson sets the record straight “Previous elections in Venezuela have been declared the safest elections anywhere in the world“ Can we please have more MPs like Chris?

The catastrophic impact of US sanctions

On the BBC, Williamson called out the impact of US sanctions:

The sanctions… are basically crippling the economy there… There is a UN rapporteur who said that the sanctions are illegal and could amount to crimes against humanity. So you’ve got the US imposing appalling sanctions. And you’ve got the elites in Venezuela who are engaged in an economic boycott, which is obviously having a significant effect on poor people in Venezuela… They’ve turned out in huge numbers to vote for Maduro at the election last year.

Before Donald Trump’s economic warfare, Venezuela’s oil production was declining at a similar rate to Colombia’s. But as the chart below shows, Venezuela’s production nose-dived after Trump applied wide-ranging sanctions. In August 2017, Trump banned any US individual or institution from financing the Venezuelan government. 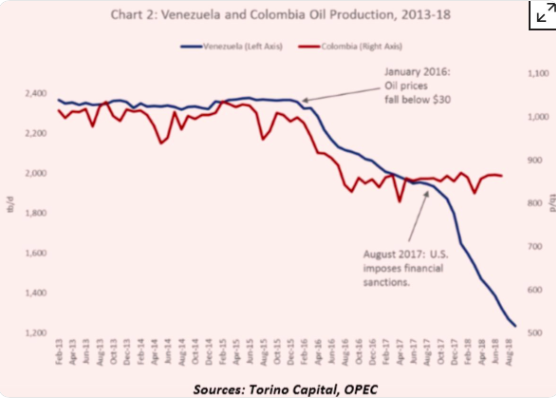 The major drop in oil production is devastating for a country where 95% of its exports are oil.

A recent poll suggests that the vast majority of ordinary Venezuelan people oppose both US sanctions and the prospect of foreign military intervention.

Facilitated by host Coburn and the BBC, Reeves then spread more pro-regime change disinformation. In response to Williamson, she claimed that “not all parties could stand” in the elections last year. But that’s just not right. And again, Williamson set the record straight, saying:

The main opposition boycotted the election. That’s their decision.

Guaidó’s supporters claim that the election is not valid because the voting system is corrupt. But the opposite seems to be true. Because former US president Jimmy Carter, for example, had previously called the Venezuelan voting system “the best in the world”. Cross-party observers, for example, audit the electoral process – which includes fingerprint scanners, voting receipts and high-tech systems.

There is a clear gulf between the reality in Venezuela and propaganda in the Western media. Thankfully Williamson had little problems facing off five adversarial pundits on the BBC. He deserves high respect for that.