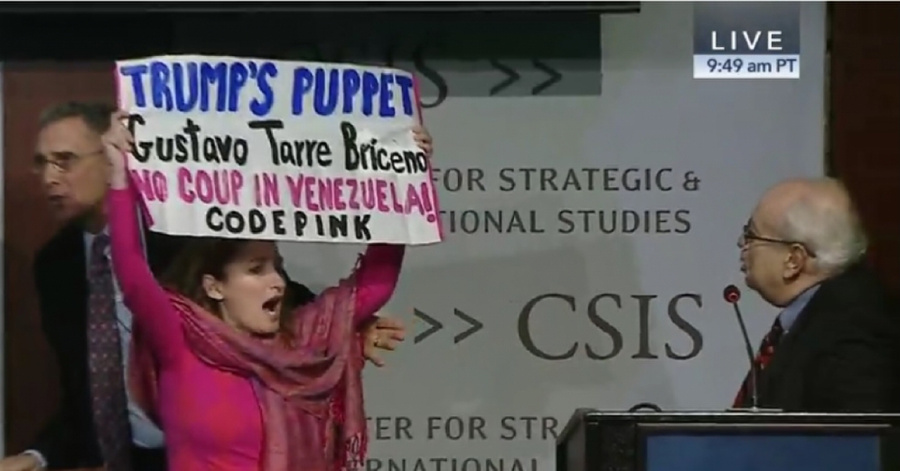 Two peace activists interrupted a conference hosted by the Center for Strategic and International Studies (CSIS) over the Venezuela coup attempt.

“The path of a civil war”

Veteran anti-war activist Medea Benjamin was the first to interrupt the conference, denouncing the US-backed coup plot and its Venezuelan collaborators. Gustavo Tarre, a Venezuelan lawyer and CSIS Senior Associate, was speaking at the time.

Benjamin, of anti-war group Code Pink, pulled no punches. Speaking about the US anointing an opposition politician president in Venezuela in place of the country’s elected president, she said:

You are totally illegitimate. Nobody elected Juan Guaidó and nobody legitimate appointed you. You are taking Venezuela down the path of a civil war.

The video has since spread across the internet.

A new poll suggests that the vast majority of Venezuelans oppose foreign interference in Venezuela.

Juan Guaidó, the far-right politician whom the US favours to lead Venezuela but whom only one in five Venezuelans had heard of before the coup attempt, appointed Tarre as his representative to the Organization of American States.

According to the AP, this coup was planned last year following clandestine talks between Juan Guaidó and the Trump administration. Journalist Ben Norton reports that Guaidó immediately drafted privatisation plans for the nation’s oil wealth. The national assembly has previously sought to privatise the country’s oil wealth. And it’s no secret that the US would also like this to happen:

US warhawks pulling the strings

Benjamin’s protest was live streamed. And she pulled no punches, asking:

What kind of patriot are you to allow yourself to be manipulated by Donald Trump, John Bolton, and now Elliott Abrams?

As security dragged Benjamin out, she shouted:

You should be supporting Mexico and Uruguay in their call for negotiations. Don’t follow the coup collaborators, like this man right here. 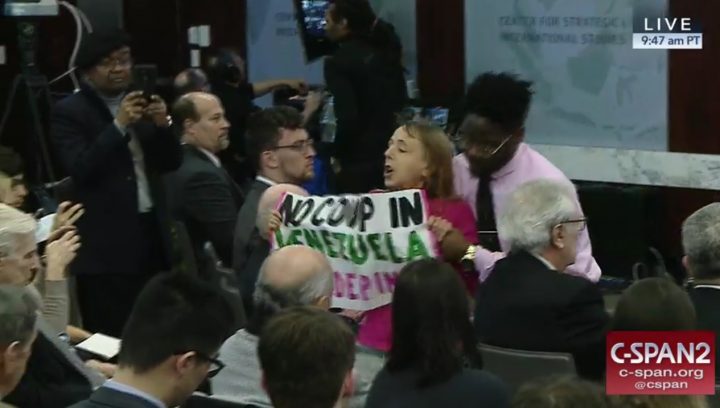 Warhawks John Bolton and Elliott Abrams were also key advocates of the 2003 invasion of Iraq. And there are numerous big problems with Abrams. For example, he was charged with and pled guilty to lying to congress about his role in supporting far-right death squads in Latin America in the 1980s. And now he’s been appointed as Venezuela liaison. 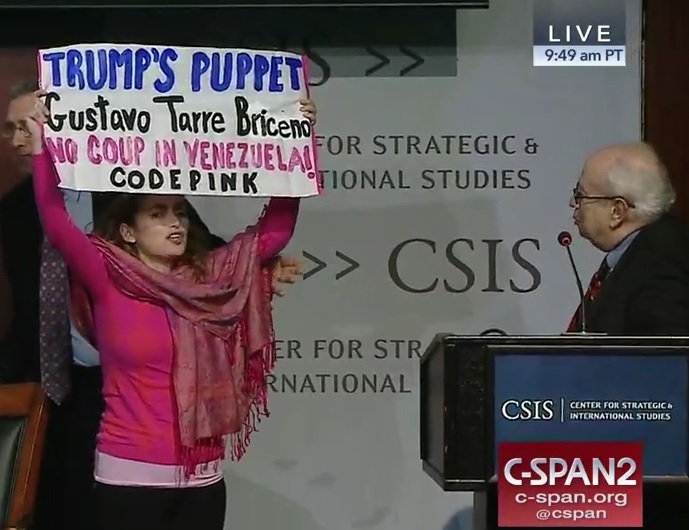 Bolton was reportedly pictured with the words “5,000 troops to Colombia” on his yellow notepad on 28 January.

John Bolton loved the Iraq War. Now he apparently wants 5,000 US troops in Colombia. Only possible reason: to invade Venezuela. Trump’s boys appear to be cooking up another illegal war, 16 years after the disaster in Iraq that killed 1 million people. How do we stop the bastards? https://t.co/ZssGhfW6Y9

The centre for regime change?

CSIS provided propaganda materials used by the CIA to destabilise the Government of Chile in the run up to the 1973 coup.

is dominated by members with strong ties to the government [including the CIA and “other intelligence agencies”] and private industry.

A recent CSIS article says that:

according to Articles 233, 333 and 350 of the Venezuelan Constitution, Juan Guaidó is well within his power as president of the National Assembly to assume the presidency of Venezuela on a provisional basis.

Venezuelanalysis, however, has dismissed this argument:

Since everyone and their dog is now an expert on the Venezuelan constitution, here's article 233 that's being used to give a "constitutional" veil to coup attempt

Unfortunately "the US really doesn't like him" is not a condition to consider that the presidency has been abandoned pic.twitter.com/IqNeJqn3xb

The coup has not yet succeeded.

We must speak out before it’s too late.