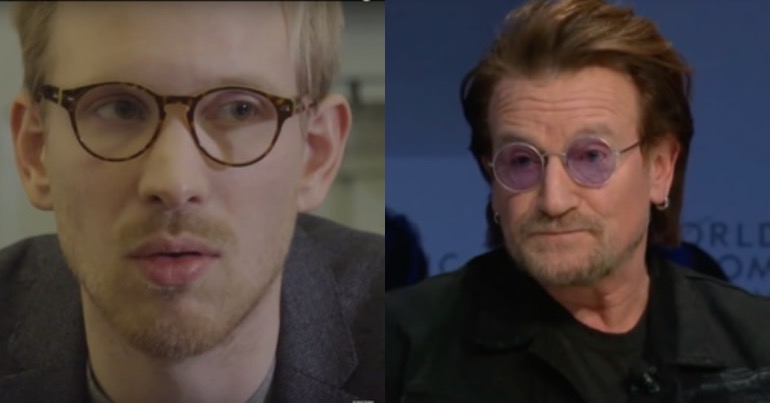 The billionaires’ annual gathering at Davos was shaken up by a stinging takedown on taxes by a Dutch historian. And for many, it was a welcome and long overdue moment.

There was a lot of talk about tax at Davos. And there was certain hostility directed at new US congresswoman Alexandria Ocasio-Cortez. She had called for the introduction of a 70% tax rate on the rich (an idea backed by a Nobel Prize-winning economist).

The predictable reaction of Dell’s CEO Howard Dell was an example of this:

However, Dell was schooled by MIT economist Erik Brynjolfsson. It was a clear demonstration of the economic and historical ignorance common within the global business community. As one commentator documented, in the US there have been vastly higher tax rates throughout history compared to today’s norm:

To @MichaelDell c @AOC @erikbryn
Michael — Here's a handy little table you can use the next time you're asked about historical marginal tax rates.https://t.co/XN5KqHEGRz pic.twitter.com/5hTNFKBrxO

It was the intervention of Dutch historian Rutger Bregman that dealt with the nonsense best, though. And he was direct, firing straight to the heart of the matter and calling out Dell’s ignorance directly:

‘It feels like I’m at a firefighters conference and no one’s allowed to speak about water.’ — This historian wasn’t afraid to confront the billionaires at Davos about their greed pic.twitter.com/TLHZQPMIwI

Bregman famously wrote the best-selling book Utopia for Realists, which advocates the introduction of a Universal Basic Income (UBI).

Others observed with amusement that the audience member questioning Bregman’s insights was none other than Ex-Yahoo CFO, Ken Goldman:

Ex-Yahoo CFO Ken Goldman at #Davos on taxes and tax avoidance: "[…] the only thing you've talked about in this whole panel on inequality, what can we really do to help solve inequality over time beyond taxes."

Although Bregman acknowledged that the takedown of Goldman by Oxfam director Winnie Byanyima was equally impressive:

What you *really* need to see is @Winnie_Byanyima’s epic takedown of an angry Yahoo CFO in 2nd half of this video. "So don't tell me about low levels of unemployment. You're not counting dignity of people. You're counting exploited people." https://t.co/AepvI2bZWY

An acknowledgement appreciated by Lara Witt of feminist publication Wear Your Voice:

I know everyone is going wild over the historian who rightfully and gloriously brought up taxes but @Winnie_Byanyima — also on this panel — truly responded with the strength workers need & deserve at Davos. https://t.co/R7046FnL05

Bregman further added that many of the corporate CEOs who opposed tax increases do themselves benefit from redistributed taxes:

Another reason why people in Davos should have been talking about taxes, taxes, taxes: most breakthrough innovations are funded by the state. https://t.co/VJpfGErbHR

Jamie Bartlett, the creator of Secrets of Silicon Valley, also pointed out a glaring hole in the thinking of Silicon Valley CEOs, many of whom think a universal basic income is a way to maintain consumer spending and solve inequality, except for one small problem:

(The Davos organisers might have hoped he was going to talk about Universal Basic Income – a popular subject in Silicon Valley – which is the subject of his recent book 'Utopia for Realists'. But UBI needs tax. Lots of tax).

Others enjoyed Bregman’s perfect swipe at the philanthropy of celebrities like Bono:

"We can talk about stupid philanthropy schemes, we can invite Bono once more, but we've got to be talking about taxes. That's it, taxes, taxes, taxes. All the rest is bullshit in my opinion" pic.twitter.com/WUXtkoCzCt

In #Davos, I asked every CEO I could how they think we should deal with inequality. They had 2 overriding answers:
1. We need to upskill people
2. But…No more taxeshttps://t.co/YFoIy0b01P #WEF19

And an expert in automated unemployment, Brian Merchant, summed up the flawed thinking perfectly:

So far in Davos

-a room full of billionaires laughed tauntingly at @AOC’s 70% marginal tax prop.
-Bill Gates scoffed at notion the system was broken, hinted critics were communists
-Tony Blair laughed at idea his cohort was responsible for any global malady

Uh, keep it up guys pic.twitter.com/sCAZoZorH1

The dominant corporate belief system is that working people must evolve to suit business needs. But corporations seem to expect no such responsibilities for themselves. Instead, they believe they can choose to engage in charity instead of paying the taxes they owe to society.

This is why interventions by Ocasio-Cortez, Bregman, Byanyima and others are so welcome. They point out an obvious truth: without taxing the rich (or fundamentally changing our political and economic system), equality and social justice are impossible – and token charity will not do.