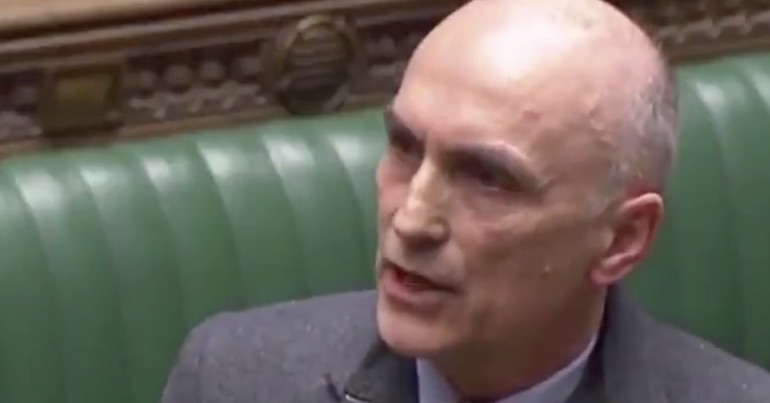 Labour MP Chris Williamson has spoken out in parliament against the Western-backed coup attempt in Venezuela. In just over a minute, he brilliantly smashed through the ongoing propaganda from both the UK government and the right-wing press. And he explained exactly why this crisis is so critical.

US “crimes against humanity”

Williamson nailed the crux of the crisis. He explained that US sanctions have already “crippled” the Venezuelan economy. And he also pointed out that a former UN rapporteur has said:

US sanctions on the country are illegal and could amount to crimes against humanity under international law.

a former special rapporteur, Alfred de Zayas, said that the US is waging economic warfare against Venezuela.

As Williamson acknowledged, “Venezuela is divided”. But contrary to UK mainstream media reports, he stressed:

The truth is, millions support the Maduro government…

“Intervention from the United States,” meanwhile, “could precipitate a civil war and lead to a humanitarian catastrophe.”

And he took this further, to level the brutal truth about the UK’s “double standards” in foreign interventions. He asked if the Conservative-led government, for example, wants to:

facilitate another humanitarian catastrophe as we are seeing in Yemen, with British arms. Do we want to see the same in Venezuela? And does [the government] not support self-determination of peoples around the world rather than intervention from Western powers?

*** Feel like much of the right-wing media isn't telling you the whole truth about Venezuela? Then you HAVE to watch this ***

RT @DerbyChrisW taking the Tories to task for their support for US sanctions on Venezuela – that hit ordinary people the hardest – & Trump's war threats. pic.twitter.com/CZqQv2iR6W

Williamson is not alone in his position. As co-editor of Alborada magazine Pablo Navarrete told The Canary, this “US-government led coup attempt in Venezuela has chilling echoes of the past”. Because it mirrors, for example, US intervention in Chile:

In 1970, then US president Richard Nixon ordered the CIA to make the Chilean ‘economy scream’ in order to ‘prevent [Salvador] Allende from coming to power or to unseat him’. While they failed to prevent Allende from taking office, a US-sponsored programme of economic warfare that included sanctions (alongside a campaign of street violence and terrorism) resulted in much of what we see today in Venezuela: shortages and hoarding of food and goods, rampant inflation, and the denial of credit for the government internationally.

As Navarrete explained, “the only solution to the crisis in Venezuela” is “a political solution” between Nicolás Maduro‘s elected government and Juan Guaidó‘s US-backed opposition. Both Uruguay and Mexico back this solution. He continued:

The solution certainly isn’t to let the reckless Trump government lead another US military coup in Latin America, in cahoots with far-right regional governments such as Brazil’s. The US history of intervention in Latin America is brutal and bloody.

As Navarette says emphatically, “we must say, Hands Off Venezuela”. And that’s the same position that Williamson represented so brilliantly in parliament.

These are the voices of reason we must to listen to, along with the Venezuelan people who are living through this crisis. Because Trump, the UK government, and the mainstream media will just continue to push propaganda. And the consequences of that, as Williamson says, could be devastating.