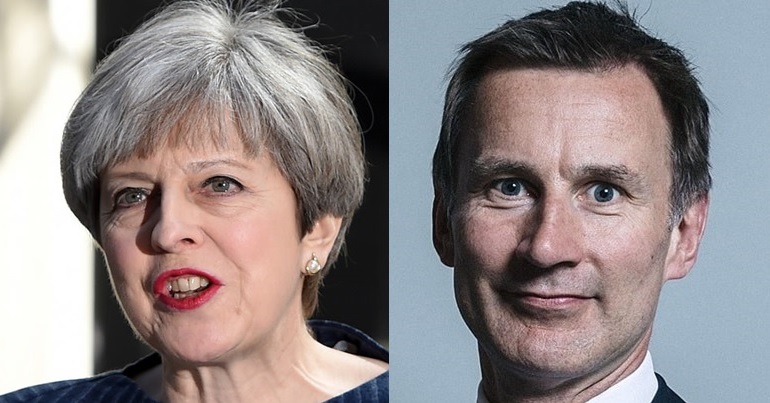 Following Donald Trump down a rabbit hole of destruction, the UK’s Conservative government just went into full colonial mode. And it did so with a mind-boggling display of arrogance and hypocrisy.

The colonial mindset in all its ugly glory

On 23 January, Trump joined elitist friends in Venezuela in launching a coup against the elected government. That meant anointing Juan Guaidó – whom Venezuelans didn’t elect as president – as president. So far, so anti-democratic.

Over in Britain, meanwhile, the Conservative government welcomed this move with glee. Theresa May’s spokesperson called the 2018 election of President Nicolás Maduro “neither free nor fair”. But in the same breath, they stressed:

We fully support the democratically-elected national assembly, with Juan Guaido as its president.

So Venezuelan votes are both democratic and undemocratic, depending on who wins. Gotcha.

But it was foreign secretary Jeremy Hunt who took things into full colonial mode. Because he insisted that it was somehow “clear” that “Maduro is not the legitimate leader of Venezuela”. And he claimed that “ballot boxes were stuffed, there were counting irregularities and the opposition was banned”.

The UK, Hunt stressed, “believes Juan Guaido is the right person to take Venezuela forward”. And he said Britain would help to “make that happen”; just like it did in the good old days of colonialism.

First, no one “banned” the opposition from running for president in 2018. A big chunk of Venezuela’s divided opposition chose to boycott the vote. It could have won if it had united. It just chose not to, preferring other methods of regime change instead.

Regarding the electoral process, however, international observers said it was clean. Plus, only around 30% of eligible voters picked Maduro. That’s hardly the kind of win you’d expect in a rigged election.

Finally, is Juan Guaidó “the right person” for Venezuela? Well, that depends on whom you speak to. His “far-right” political party welcomed the victory of fascist Jair Bolsonaro in Brazil last year, and even called on him to “rescue” Venezuela’s democracy. Also, there’s no proof that the party’s more popular than the ruling party (in fact, the opposite seems true); and no one has ever voted for Guaidó personally to be president. As The Canary previously reported, Guaidó’s opposition-controlled national assembly (which won elections in 2015) is actually just as unpopular as Maduro. Previous polls, meanwhile, show that Venezuelans overwhelmingly oppose US interference in their country.

The utter hypocrisy of it all

Hunt’s promise to ‘make regime change happen’ in Venezuela, meanwhile, is just as hypocritical as it is arrogant. Because he’s not promising regime change against Saudi Arabia, Turkey, Israel, Colombia, or any other murderously repressive government. They’re allies. So why would he?

It’s naked hypocrisy. And it’s vomit-inducing. Because the UK backs brutal dictators and regimes around the world. Its US allies, meanwhile, support the vast majority of the planet’s dictatorships. One key example for both superpowers is the Saudi dictatorship. In fact, only this week Jeremy Hunt was trying to convince us that he and his government want peace in Yemen; despite their ally Saudi Arabia creating the world’s worst humanitarian crisis there – with British support and over £4.6bn worth of UK arms.

Then there’s Turkey, a key NATO ally. That’s in spite of it being found guilty of war crimes and crimes against humanity; in spite of its latest elections taking place while opposition leaders were in jail, and amid accusations of violence at polling stations and ballot stuffing (a situation which is ongoing).

UK and US allies are responsible for death and destruction around the world. So any talk of democracy or human rights elsewhere is just empty posturing. Because the colonial mindset is clear. Governments which lick the boots of global economic elites are fine – no matter what they do. Governments which challenge those elites, however, must go. And the UK and the US are the colonial overlords which ‘make that happen’.

Sanctions and coups are always deadly – and useless.

The situation in Venezuela is not black and white. It rarely is in politics. So fervently opposing all foreign intervention there is not the same as saying Maduro’s government is perfect. It isn’t. But it has its achievements. Maduro’s predecessor, Hugo Chávez, shifted the country’s oil wealth away from rich and powerful local and global elites. Poverty dropped; and investment in healthcare, education, and housing all rose. That’s why the government was so popular. There were also mistakes, though. For example, it failed to diversify the oil-dominated economy, which remained overwhelmingly in the private sector (with some minor but notable exceptions). And when global oil prices dropped, it was too late. The right-wing opposition and their US backers saw a chance to get rid of the government, through sanctions and (sometimes violent) protests. Such efforts have only increased in recent years.

Why do gatekeepers of global capitalism like the US and the UK hate Venezuela so much, though? Well, it’s only days away from the energy-guzzling US, and reportedly has the largest oil reserves in the world; along with a number of other natural resources. But its ruling party has gone against global corporate interests. The response? Devastating and useless US sanctions, which only worsen the lives of ordinary people; and now, a highly cynical attempt at regime change (we all know how that turned out in places like Guatemala, Iran, Chile, Iraq, and Libya).

Amid the economic crisis that mostly followed the drop in oil prices, the ruling party’s popularity has fallen. But it’s still the most popular (thanks in part to the serious divisions in Venezuela’s opposition). And trade unions still back the government. So any attempt at violent regime change in Venezuela is likely to meet with serious resistance.

One country has no right to make decisions for another.

In the end, though, it doesn’t matter what we think about Maduro or his party. Because no country has the right to decide what happens in another country. And that applies to all countries – whether their governments are on the left or right. Only the citizens of a country have the right to change their own destinies.

Foreign powers picking sides and seeking regime change helps no one. Instead, they should support dialogue and peace in Venezuela.

In the UK, it’s not at all surprising that the Conservative government flips into colonial mode so easily. Because it would love to turn the clock back a hundred years. Its actions and words prove that. But Britain has absolutely no right to ‘make regime change happen’ in a foreign country. Colonialism is over. And anyone who doesn’t want it to return must fervently oppose the West’s toxic coup attempt in Venezuela.