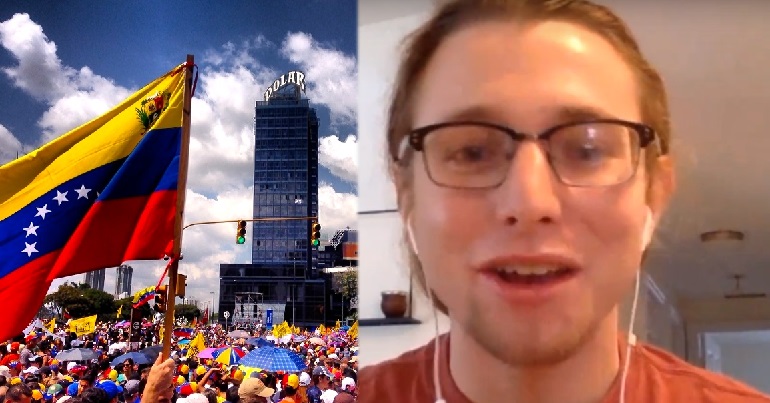 Venezuela will hold elections on Sunday 20 May. But as the mainstream Western media has been so useless at telling us the truth about the country in recent years, an expert has given an alternative perspective.

In preparation for the anticipated disinformation campaigns of media and political elites, The Canary spoke to a political analyst and editor from the independent and reader-funded news website Venezuelanalysis. We asked Lucas Koerner five main questions, about: Sunday’s elections, Venezuelan democracy in general, the economy, the opposition’s place in the political context, and the achievements of the current government.

Firstly, we asked Koerner if there was a serious left-wing challenger to current president Nicolás Maduro in the elections of 20 May. He also told us about the electoral challengers to the right of the incumbent:

And considering that the US government has already decided not to recognise the election results, while placing sanctions on Venezuela, Koerner insisted:

There’s no reason at all to suggest that this election is in any way… procedurally problematic or not democratic.

In short, the US seems to be openly seeking to influence and delegitimise the elections simply out of fear that its preferred candidates will not win. Because of this, author and Glasgow University Media Group member Alan MacLeod has argued that:

these elections are as much Trump vs. Maduro as Falcon vs. Maduro.

One of the most facile arguments made by media and political elites outside Venezuela is that it’s a ‘dictatorship’. So we asked Koerner to what extent he thought this was true.

He highlighted the long record of democratic elections in Venezuela, which even saw the opposition win parliamentary elections in 2015. He also pointed out the Western hypocrisy regarding other countries in Latin America (and the world) that have experienced much greater attacks on democracy in recent years. And he explained why other arguments don’t stand up to scrutiny either:

Essentially, when media outlets lazily repeat anti-Venezuelan propaganda about the country’s democracy, they’re doing themselves and their readers a serious disservice.

With the ignorant and inaccurate ‘dictatorship’ propaganda to one side, another argument of Venezuela’s opponents is that Maduro’s government has messed up the economy. And as Koerner told The Canary, there is some truth in this. Explaining the country’s over-dependence on oil, and therefore the serious impact of lower oil prices on its economy, he described ways in which the government has tried to overcome these difficulties:

He also pointed out the importance of factoring US-led international sanctions into the equation. And he slammed the hypocrisy of these ideological foreign attacks on Venezuela, asking:

What about Saudi Arabia, which is committing a genocide in Yemen? There’s no talk about that. I mean, it’s absolutely absurd…

Or Israel, for that matter…, which is slaughtering… Palestinians every day.

To summarise, he said:

It’s a naked manifestation of the cynical… intentions and… discourse of Western foreign policy. I mean, no doubt about that.

4) The political context and the opposition

Koerner also provided some context for the violent 2017 clashes between opposition and pro-government forces. And he described how this deadly unrest ended, highlighting the impact the events have had on the country in recent months. Linking the situation to Sunday’s elections, he said:

But they’re also voting for Maduro, many of them, because they see him as the continuity of the revolutionary project… They think that, you know, by voting for Maduro, at least there’s the possibility that… this crisis can be overcome on the terms that benefit the masses of the people… They know what’s gonna happen if the opposition wins. There’s no doubt about that.

5) The achievements of the current government

Amid all the criticism from opponents of Venezuela’s government, it’s also important to remember what it has achieved since Hugo Chávez won the presidential elections of 1998. And Koerner highlighted these achievements:

In particular, he gave more information about the ‘commune’ system in Venezuela, which he clearly sees as one of the government’s most notable achievements:

Overall, the situation in Venezuela is complex. And the government, while generally a strong and progressive defender of independence against US and international interference, is far from perfect. So considering all of this, to whom should Canary readers show their solidarity? Koerner said:

I think they need to show solidarity with the Venezuelan people… with, you know, its trade unions, with its community organisations, its feminist organisations…

And he pointed out:

There’s a consensus. These organisations are supporting the candidacy of Nicolás Maduro.

One thing that we should definitely all do regarding Venezuela is question the lazy ideological narrative of most Western media outlets. We should question their double standards, while seeking out reliable alternative perspectives.

The disinformation campaigns will continue. There’s little doubt about that. But we can all play a role in fighting back against them.

– Lucas Koerner is a Caracas-based political analyst and editor for Venezuelanalysis. He is currently pursuing a master’s degree at Venezuela’s Institute for Advanced Studies. And at the end of our conversation, he highlighted the independent funding of Venezuelanalysis, explaining that he himself plans to participate in observing Sunday’s elections. He also made the following request for support from Canary readers:

– Support The Canary if you appreciate the work we do. Also see previous Canary articles on Venezuela – and for more Global articles, follow us on Facebook and Twitter.

Featured image via Durdaneta and screenshot