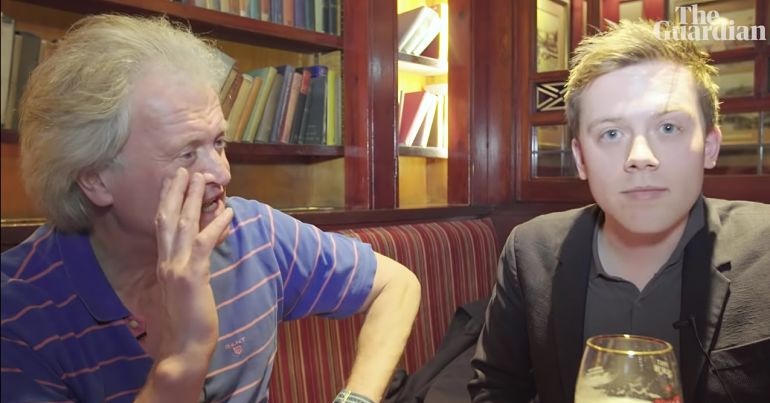 The Guardian published an Owen Jones interview with Wetherspoon boss Tim Martin on 25 January. Given Martin’s consistently idiotic stance on Brexit, the journalist easily managed to make him look like a fool. But Jones put one question to Martin which accidentally managed to humiliate the entire British media as well.

In all my days

Jones mostly pressed Martin on his views on Brexit. The Wetherspoon boss is a no-deal enthusiast. But as a Twitter user pointed out after watching the interview, his argument for leaving appears to be:

I mean literally this is his argument actually

In the interview, however, Jones also asked Martin about wages. Specifically, he said:

The truth is you are yourself part of the elite. You’re a very wealthy man. And many of your workers are on poverty wages.

Jones went on to try and highlight that the taxpayer has to prop up Wetherspoons workers’ wages through in-work benefits. But Martin blew off the topic by calling Jones’ questioning “silly” and “childish”. He also accused the Guardian columnist of being “rude” and “aggressive”. He then went on to explain why he was so put out by the interview:

As Jones noted on Twitter, though, Martin’s incredulous reaction reveals more about the standard of British journalism than it does about Jones’ questioning style:

I asked Tim Martin why he paid his workers poverty wages: he had no answer, other than to laugh and call the question "childish". He's been on TV many times, why's he never been asked? Why are other bosses not asked? It's a huge failure of our media. https://t.co/FE1gZMM3DG

You can watch the whole car crash here:

Of course, it’s not childish or silly to ask a multi-millionaire about the low wages he pays his workers – especially one who is fiercely advocating for the most financially damaging Brexit possible. After all, studies have shown that the Brexit vote was significantly influenced by austerity, low wages, and inequality.

Neither is it wrong for a journalist to be aggressive and rude when questioning the elite. In fact, having an adversarial relationship with those who wield power is fundamental to a journalist’s job.

Clearly, though, the British media is failing abysmally at this. Instead, they’re giving people like Martin an easy ride.