A Tory councillor is defending her call to 'tear down' homeless people’s tents. It really isn’t going well. - The Canary 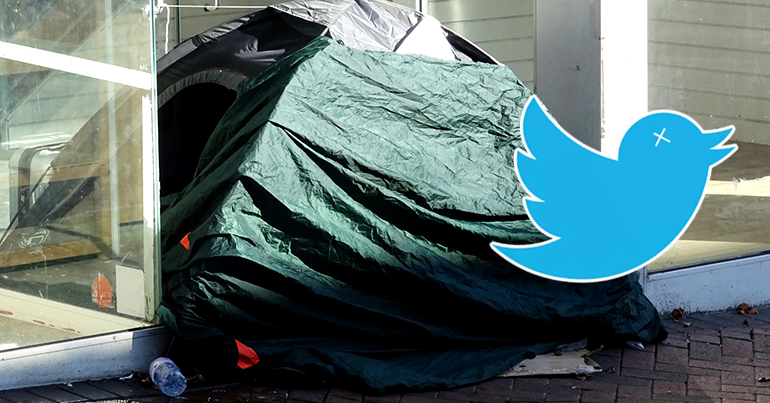 On 24 January, a Tory councillor said she wanted to “tear down” tents belonging to homeless people on the streets of Cardiff. She said this would benefit “safety in our city centre” and “prosperity for local businesses”. But the true ignorance of her views came out when she tried to defend herself.

Kathryn Kelloway, a Conservative councillor in Cardiff, called on the city’s council leader Huw Thomas to “tear down” the tents of homeless people. Kelloway even included a photo of herself standing next to some of the tents:

A similar problem in Wales’s third city @NewportCouncil where we do exactly what Leader of Cardiff is doing – working with our diminishing budgets cut by #ToryAusterity to help people and with 3rd sector partners. Your Tory Government has caused this disaster – own it @LlamauUK

Cllr Kelloway it is the policies of your party, the Conservative Party, who have created the biggest rough sleeping and homelessness crisis in this country in a generation and it is your evil party who need to be torn down.

Your party caused this.

Let's move them to your huge front lawn in Cyncoed instead!!

Try staying in one of those hostels, without telling people who you are and counting on your privilege to save you. Then we'll talk.

The councillor’s lack of empathy outraged some:

How can you be so devoid of compassion and empathy for people sleeping in tents on a cold rainy night?? If you want to "seek a better image" and solve the issue of people sleeping in the street, advocate for housing these people. Housing First is the only solution to homelessness

OMG! Did you really say this? WTF is wrong with you ???

Others were more direct in their response:

As a formerly homeless person, I'd like to ask you, on behalf of homeless people everywhere, to get in the sea.

And one person summed up the whole debacle:

This has gone well for you

The problem with hostels

Kelloway followed up her initial tweet by trying to play it off as an attempt to “raise attention” about people sleeping on the streets of Cardiff. Then the councillor defended her comments. And that’s when she showed her true ignorance.

Kelloway first claimed that there are “more than enough hostel beds” for all the people on Cardiff’s streets right now. She then said she has “worked for homeless charities” and therefore understands the issue. Despite this, Kelloway doesn’t seem to understand why many people choose not to enter hostels.

In the Senedd today @LeanneWood raised the issue of misleading statements being made in the media about Cardiff's homelessness / tents situation. She's absolutely right. People are in tents because floorspace is frightening, unsafe & full of drugs. Homeless people deserve better.

This is widely understood. In 2016, the Big Issue published a piece detailing the problems four of its vendors had with hostels. Drugs and alcohol were mentioned. Overcrowding, lack of respect from staff, and restrictions on personal freedom were highlighted. The piece also pointed out the excessive cost of staying in a hostel. One vendor had to claim “£866 a month” in housing benefit.

In the end, there are as many reasons to avoid hostels as there are people sleeping in tents. A WalesOnline article from December 2018 said one man sleeping on the streets of Cardiff “refused because of the effect [a hostel] might have on his dog”. Another man was concerned his belongings would be stolen.

It’s therefore not hard to see why people might choose tents over hostels.

Kelloway defended herself by claiming to understand the issue and saying there are enough beds in hostels for all. But it’s clear she’s either naively or wilfully ignoring the real issues.

The decision to remain in a tent rather than entering a hostel has numerous, complex motivations. Underlining these are a desire for dignity and empowerment. However, this is something Kelloway shuts down by claiming tents are attacking the “safety” and “prosperity” of Cardiff.

No government has yet ‘solved’ the issue of people sleeping on the streets. But, as The Canary has reported multiple times, Tory austerity has pushed numbers to horrific levels. If she really cares, maybe Kelloway needs to look at her own party first.