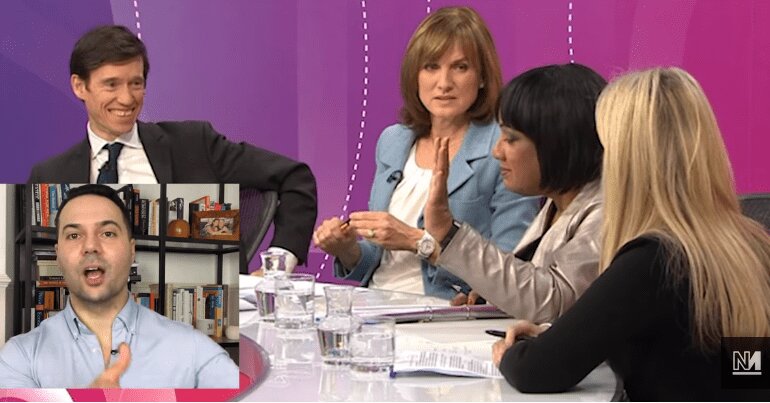 During an extensive takedown of the show’s bias, Bastani analysed the uncontrollable grinning of Conservative minister Rory Stewart:

Two minutes of a thirty minute analysis of last week’s #bbcqt I did for @novaramedia (full video is pinned tweet).

It was, without doubt, the worst, most biased chairing I’ve ever seen on broadcast media. pic.twitter.com/jmv2FQa0SZ

As Bastani notes, it’s easy to see why Stewart is so happy. Host Fiona Bruce and right-wing journalist Isabel Oakeshott seemed too busy attacking panellist Diane Abbott to even remotely hold the government to account.

Meanwhile, the backlash from the 17 January edition over the show’s bias against Abbott isn’t letting up. In fact, the pressure forced the show’s new host to issue an on-air clarification while chairing the following episode. Although, Bruce stopped short of apologising and admitting that she was peddling falsehoods about polling data.

In his video analysis, Bastani also points out how frequently Stewart is let off the hook:

I’ve never repeatedly seen a host let a government minister off the hook so many times before.

During the episode, Abbott was explaining why Jeremy Corbyn wanted May to rule out a no-deal Brexit:

If we come out with no-deal and no transition period, all sorts of security and policing arrangements will fall.

Then the shadow home secretary accused the government of having too much business for the time frame:

We have a government minister here. Maybe he can tell us how the government is going to get through 12 separate bills between now and the end of March?

Instead of questioning the government herself, presenter Bruce actually shielded Stewart from having to answer:

Let’s not get into that level of detail.

“A systemic bias” against progressives

All things considered, it’s hard not to agree with Bastani’s conclusion:

It’s pretty clear that Fiona Bruce failed dramatically in her responsibilities as chair… We see throughout the 50 minutes… a systemic bias against socialist voices. Diane Abbott isn’t taken seriously by… much of the media establishment for a number of reasons. Firstly, she’s a Black woman. Secondly, she comes from a working class background. Thirdly, she isn’t scared of them. And fourthly, she’s a socialist. You put all of this together and you have a woman who the media establishment wants to lambast and undermine and demean at every opportunity.

BBC Question Time is consistently biased against any progressive challenge to the status-quo. But Bruce’s behaviour towards Abbott may be the final nail in the coffin for the show.