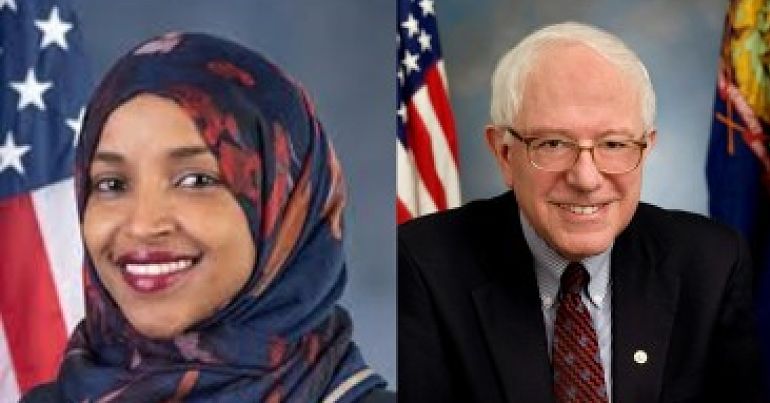 US president Donald Trump green-lighted an attempted coup in Venezuela on 23 January. And while cross-party support for the latest chapter of US imperialism has been unsurprisingly strong, many ordinary people have awaited a critical response from progressive politicians. But the response from leading progressive voice Bernie Sanders disappointed many. Fortunately, new member of congress Ilhan Omar was on hand to show Sanders how to really oppose US imperialism.

Sanders speaks up, but disappoints

On 24 January, US senator and likely 2020 presidential candidate Bernie Sanders posted a Twitter thread on Venezuela. And his final comment was the strongest:

But we must learn the lessons of the past and not be in the business of regime change or supporting coups—as we have in Chile, Guatemala, Brazil & the DR. The US has a long history of inappropriately intervening in Latin American nations; we must not go down that road again. 3/3

However, he began the statement with a particularly one-sided assessment of the current situation in Venezuela:

The Maduro government has waged a violent crackdown on Venezuelan civil society, violated the constitution by dissolving the National Assembly and was re-elected last year in an election many observers said was fraudulent. The economy is a disaster and millions are migrating. 1/3

Sanders is, of course, right to outline that the US “must learn the lessons of the past”. But for many, his statement just wasn’t good enough.

Firstly, the critical issue at hand is the sovereignty of Venezuela. Since Nicolás Maduro’s “violent crackdown” (which happened during a conflict involving violent acts from sectors of the opposition) doesn’t excuse US interference, Sanders has his list of priorities the wrong way around. Because ultimately, criticism of US imperialism doesn’t require comment on the worthiness of its victim.

Secondly, Sanders vitally failed to mention Washington’s attempted coup in Venezuela in 2002. While US meddling in Chile, Guatemala, Brazil, and the Dominican Republic should be recognised, remembered, and condemned, the 2002 coup in Venezuela is vital context to what’s happening today. For Washington, toppling Venezuela’s government is unfinished business.

Thirdly, Sanders outlined that the “United States should support the rule of law, fair elections and self-determination for the Venezuelan people”. But as The Empire Files’ Abby Martin pointed out:

They just had a fair election the US-backed opposition chose to boycott. Maduro won. You need to strongly condemn the illegal US-backed coup underway instead of sponsoring more bills condemning Venezuela https://t.co/C6kJkWSJdq https://t.co/6l8ZA4Kdn2

In short, Venezuela – and not the US – is responsible for the self-determination of Venezuelans.

Ilhan Omar shows Sanders how to do it

Following her victory in the 2018 midterms, Ilhan Omar became one of the first Muslim women to enter congress. And following the attempted coup in Venezuela, she showed Sanders what real opposition to US imperialism looks like.

On 24 January, she insisted:

A US backed coup in Venezuela is not a solution to the dire issues they face. Trump's efforts to install a far right opposition will only incite violence and further destabilize the region. We must support Mexico, Uruguay & the Vatican's efforts to facilitate a peaceful dialogue.

The following day, she commented fearlessly on the relationship between US intervention and economic interests, tweeting:

We cannot hand pick leaders for other countries on behalf of multinational corporate interests. The legislature cannot seize power from the President, and Venezuela's Supreme Court has declared their actions unconstitutional.https://t.co/rK5tG5CdAv https://t.co/mfkkcFWgIc

We can’t afford to get involved in costly interventions abroad when tens of millions struggle to access housing, healthcare, and clean water right here at home. U.S. meddling abroad always ends badly for us, and the people we claim to be “liberating”.

She concluded that, if the US really cared about ordinary Venezuelans, it would immediately lift devastating economic sanctions:

If we really want to support the Venezuelan people, we can lift the economic sanctions that are inflicting suffering on innocent families, making it harder for them to access food and medicines, and deepening the economic crisis.

We should support dialogue, not a coup!

Sanders has led vital efforts to end US support for Saudi Arabia’s catastrophic war on Yemen. Like Omar and Khanna, he must now lead the way in opposing US imperialism in Venezuela.