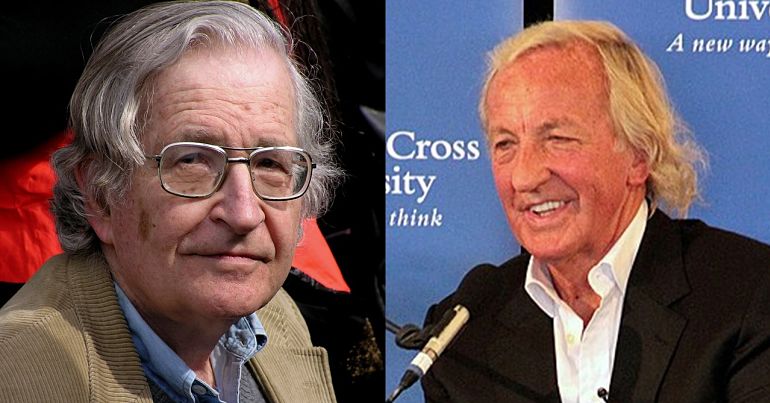 Over 70 scholars and experts – including Noam Chomsky, journalist John Pilger, and filmmaker Boots Riley – have signed an open letter condemning the US-backed attempted coup in Venezuela. They join growing resistance to the latest chapter of US imperialism.

The letter, which was issued on 24 January, included key criticisms of US intervention. It began:

The United States government must cease interfering in Venezuela’s internal politics, especially for the purpose of overthrowing the country’s government. Actions by the Trump administration and its allies in the hemisphere are almost certain to make the situation in Venezuela worse, leading to unnecessary human suffering, violence, and instability.

The US and its allies must cease encouraging violence by pushing for violent, extralegal regime change. If the Trump administration and its allies continue to pursue their reckless course in Venezuela, the most likely result will be bloodshed, chaos, and instability.

In order to solve this crisis, the signatories wrote:

The only solution is a negotiated settlement, as has happened in the past in Latin American countries when politically polarized societies were unable to resolve their differences through elections.

For the sake of the Venezuelan people, the region, and for the principle of national sovereignty, these international actors should instead support negotiations between the Venezuelan government and its opponents that will allow the country to finally emerge from its political and economic crisis.

We have here an unconstitutional situation in which the legislator [opposition leader Juan Guaidó] is usurping competences that belong to the executive [President Nicolás Maduro] and the judiciary [the supreme court]. The judiciary has already declared all of these actions and declarations of the national assembly unconstitutional.

He also pressed for a negotiated settlement, insisting:

The only logical avenue now is to call for dialogue.

An important global consensus among academics and experts is therefore emerging. And that consensus says: the US should be supporting a negotiated settlement and not illegal regime change in Venezuela.