Here's why the idea austerity is coming to an end is total, utter nonsense - Canary 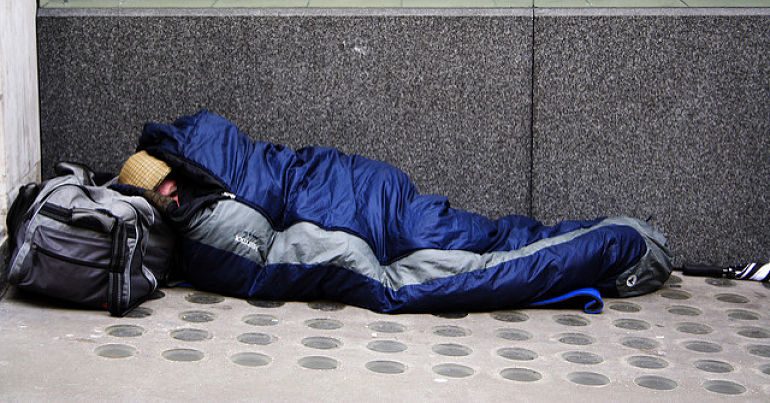 In his autumn budget on 29 October, chancellor Philip Hammond announced that the “era of austerity is finally coming to an end”. But the lack of measures in the budget to truly tackle Britain’s shocking homelessness crisis paints a very different story.

The UK’s ideological austerity has undoubtedly benefited the rich. The government has aggressively shrunk the state since 2010 while the richest thousand people increased their wealth by a combined £274bn over the last five years.

People at the bottom bear the burden of this supposed fiscal responsibility, while those at the top thrive in a landscape free of restrictions.

Rising homelessness is the ultimate example of this. Rough sleeping has increased for seven years in a row. In London, it’s now at record levels. An investigation by the Bureau of Investigative Journalism found that 449 homeless people died in the last year alone. Meanwhile, over 120,000 children are growing up in decrepit, insecure temporary accommodation.

The government’s relentless cuts to council budgets, and the resulting decimation of social housing, have pushed many to the expense and insecurity of private renting. In 2017, evictions by the private rental sector was the biggest cause of homelessness.  Meanwhile, private landlords were rewarded with a cool £9bn through housing benefit in 2014/15.

A deeper look at the people who make up the UK’s shocking homeless statistics demonstrates how a cocktail of cuts work together to worsen the crisis. Research by the homeless charity St Mungo’s found that 80% of rough sleepers who died in London in 2017 had mental health needs, compared to just 29% in 2010. Cuts to mental health services mean patients with serious mental health issues can sometimes wait two years to receive specialist NHS help. Homeless services have also become so stretched that many don’t have the resources to support people who are deemed ‘high risk’. For some, the street becomes their only option.

Furthermore, research by the housing charity Shelter found that there has been a 48% rise in single mothers becoming homeless since 2010. The charity’s CEO Polly Neate told the Independent:

Balancing work and childcare can be difficult for any single parent, and with social housing in short supply while private rents far outstrip what people can afford, it’s no surprise that many are struggling to keep a roof over their children’s heads.

An investigation by the Observer also found that:

This is fuelling rising homelessness.

The homeless minister Heather Wheeler famously declared that she didn’t know what was causing rising homelessness. But when Theresa May and Hammond declared austerity was “coming to an end” it finally seemed as if the government was going to address the structural causes of the issue.

But all is not what it seems. This government is a magician when it comes to shrinking back the state. Hammond, for example, declared a £2bn funding boost for mental health services, which was later revealed to just be part of the already announced NHS funding. And shadow chancellor John McDonnell rubbished the government’s funding boost for Universal Credit:

The money promised for universal credit is less than a third of the £7bn of social security cuts still to come and today’s announcement on work allowances reverses just over half the cuts made in 2015.

Don’t get your hopes up

Rising homelessness doesn’t just appear out of thin air. It’s the product of eight years of valuing supposed fiscal responsibility above the welfare and livelihoods of those at the bottom of society.

We need a radical change in ideology to reverse its rise. Despite what Hammond says, the budget proved that this isn’t coming anytime soon.