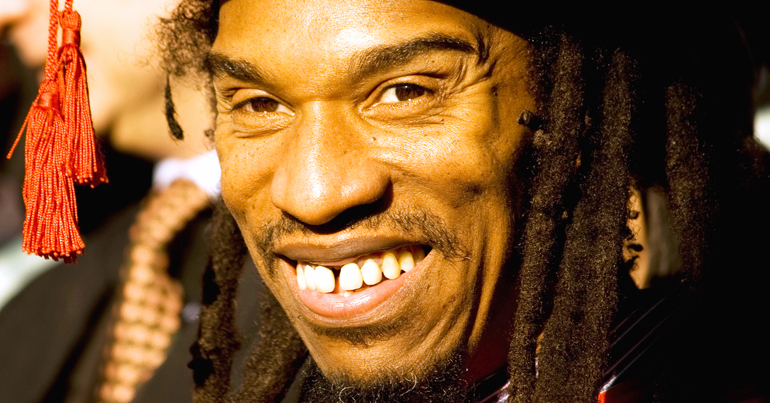 Arts Industry Magazine named Benjamin Zephaniah as a possible front-runner for the soon to be vacant post of poet laureate. But the anarchist writer and musician ruled himself out on Twitter in the most spectacular way possible.

“They oppress me, they upset me, and they are not worthy”

Until 1999, the post of poet laureate was a lifetime appointment. Beginning with Andrew Motion, though, it became a fixed ten-year term. Carol Ann Duffy was the first woman to take up the role in 2009. Now, nearly ten years on, the hunt for the nation’s next poet laureate is on.

As a result, Arts Industry Magazine put forward a number of possibilities:

But within hours, Zephaniah rebutted the suggestion that he might take up the state appointment:

I have absolutely no interest in this job. I won't work for them. They oppress me, they upset me, and they are not worthy. I write to connect with people and have never felt the need to go via the church, the state, or the monarchy to reach my people. No money. Freedom or death. https://t.co/C12amoekbi

It’s not so surprising, then, that Zephaniah would baulk at the idea of becoming poet laureate. As an outspoken anarchist, the role of writing verse for government and royalty would be a contradiction.

Bravo Benjamin! No gods, no masters.

As were other members of the public:

Meanwhile, others were explicit about the politics of Zephaniah’s stance:

Well said. The state is currently working against the interests of many of the people – not for them. You’re entirely right not to want to be part of their ‘club’.

I admire your decision to take this opportunity to make your feelings and your political position, your opposition, clear. You are, in my mind, The People’s Poet; a much worthier and grander position.

And some even wrote poems to commemorate the occasion:

It may be late-night wine talk,
But I just want to say –
Speaking truth to 'Poet Power'
Your words have made my day!

Meanwhile, others suggested the choice is a missed opportunity to change the post ‘from within’:

I understand why you don’t want to be part of it, but how great would it to be have somebody anti-establishment in the role?

But this is unlikely to concern the writer. In an interview published by Red Pepper, Zephaniah said:

Reforming does nothing. That’s why I’m an anarchist.

The best form of representation

It’s not the first time Zephaniah has shirked government recognition. In 2003, he turned down an OBE. When talking about this at the time to Radio 4 Today, Zephaniah said:

I do not write poems to win awards or to get OBEs or laureateships. I write for people.

Zephaniah is also not the only person to discount themselves from the position. Wendy Cope said in 2008 that she didn’t want to be poet laureate. She then called for the post to be abolished the following year. Historically, Rudyard Kipling and William Morris – like Zephaniah, an anarchist – turned down official offers.

Talk about the next poet laureate is focused on representing Britain’s Black and Minority Ethnic communities. But Zephaniah is ardent in not wanting to be a tool for government – any government. And his stand against church, state, and monarchy is the best form of representation he could give.

– Watch Zephaniah talk about poetry, anarchism and other matters with Krishnan Guru-Murthy.

– Read some of Zephaniah’s poetry.

– Check out other articles at The Canary about anarchism and poetry.