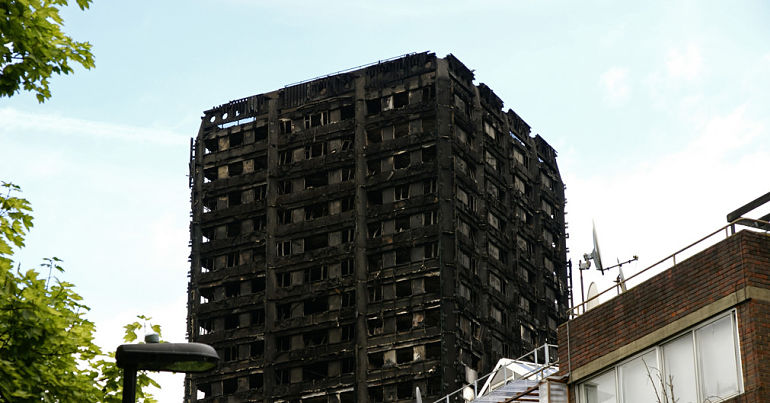 On 5 November, a video went viral showing a group of people laughing while burning a cardboard model of Grenfell Tower. As the cardboard burned, those involved mockingly shouted “help me”, “jump out the window”, and “stay in your flat, we are coming to get you”. The model included numerous faces – mostly non-white – looking out of windows as the fire blazed below.

The event, which has now led to five arrests, caused horror and disgust across Britain. But for many, the right-wing media and government’s disgust is utterly hypocritical. Because as the Daily Mirror‘s Kevin Maguire pointed out:

Nobody has been prosecuted over the deaths of 72 people in the Grenfell inferno(excluding compensation fraudsters). We shouldn't lose sight of the real scandal amid calls to charge idiots who burned a model of the tower(heartlessly offensive but is it a legal offence?)

And according to rapper and activist Lowkey:

You know why those people in that hideous video felt burning an effigy of Grenfell tower was a good idea? Because the corporate media which is run by billionaire tax exiles led them to believe the people in that building were undeserving.

A far-right culture of victim-blaming

It remains unclear whether those in the video have links to far-right groups. But people on social media speculated on the motivations of those involved:

I'll eat Tommy Robinson's tinfoil hat if the people who burned a model of Grenfell Tower don't turn out to be towards the far-right end of the political spectrum.

Shortly after the Grenfell Tower fire, meanwhile, Stephen Yaxley-Lennon (aka ‘Tommy Robinson’) decided to attack the victims, asking “why are we tolerating illegal immigrants squatting?” His shameful rhetoric was matched by those in the video, who yelled as the model blazed: “That’s what happens when they don’t pay their rent.”

A campaign of hate’s own Frankenstein

UK PM Theresa May, home secretary Sajid Javid, and the Daily Mail have all responded to the video in apparent disgust. May called it “utterly unacceptable”, Javid named it “disgusting, shameful behaviour”, and the Daily Mail described it as “horrifying”.

But according to Labour activist and World War II veteran Harry Leslie Smith:

Make no mistake, racism has metastasized in Britain like a stage 4 cancer b/c of the right wing media, Theresa May's government & the indifference of too many good people to the consequences of austerity on the psyche of this nation. https://t.co/spO3NTLo6Z #GrenfellTowerEffigy

As well as offering hopelessly inadequate support to the victims of the fire, the Conservative Party has long promoted policies that create an atmosphere of suspicion and fear in the UK. Nobody, moreover, has yet been held accountable for the fire.

May and Javid are among those responsible for this wide-scale injustice.

People shared similar sentiments about newspapers like the Daily Mail:

I am Jewish
Over last few years I have watched with horror how hate speech against Muslims has become more mainstream.
Culprits include Mail, Express, Sun, some Tory politicians.
The Grenfell Tower video sickens me to my core.
I feel the same as if the targets of hate were Jews

The Daily Mail has published anti-Muslim stories filled with lies, supported the shameful Trump administration, and blamed immigrants for many of the UK’s ills. It also published an article suggesting the Grenfell fire was caused by one resident’s faulty fridge, which ranked “among the top five most complained-about to [press regulation organisation] Ipso”.

Justice4Grenfell campaign responds with a message of hope

In an official press release, the Justice4Grenfell campaign said:

We are disgusted and shocked at the inhumanity and callousness of those involved in this video.

And in a statement to The Canary, it added:

We know the spirit of the British public as that was demonstrated in their response in the days, weeks and months following the fire – with so many giving up time, donations and support to those affected. Such a callous video isn’t representative of the majority of Britain but a very small amount of people who choose to take part in these shocking acts… We must always remember foremost that 72 people lost their lives as a result of the fire – that cannot be taken lightly.

With that in mind, here is Lowkey’s music video Ghosts of Grenfell, which highlights the names of the fire’s victims:

We must never forget.

– Write to your MP to tell the government to offer better support to the victims of the Grenfell Tower fire.

– Read more of The Canary’s coverage of the injustice of the Grenfell Tower fire.