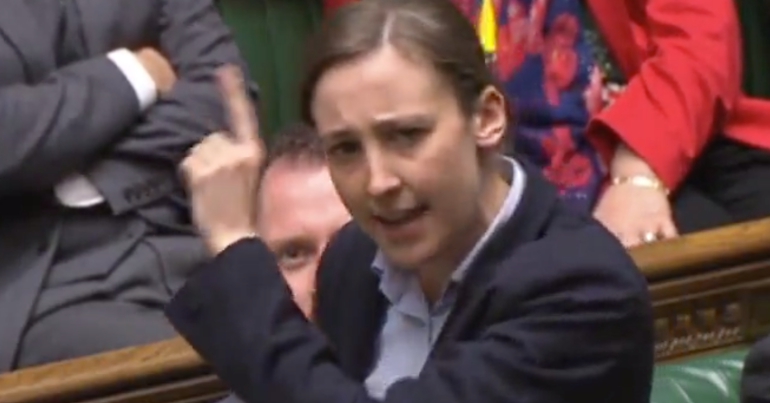 On 2 November, SNP MP Mhairi Black gave her verdict on 2018’s Autumn Budget. Her analysis slated both the Conservative Party and the Department for Work and Pensions (DWP). And her impassioned response has to be one of parliament’s finest moments. Because she slammed the benefits system as “downright stupid”, “ignorant, cruel and a deliberate misconception”.

“Scratch beneath the surface”

Black’s speech focused on what happens when you “scratch beneath the surface” of the budget. She described a budget:

Soaked in ideology, backed by mistruths

Speaking about the DWP’s most controversial benefit, Universal Credit, Black was adamant that it is “not fit for purpose”. And she tore shreds out of chancellor Philip Hammond’s assertion that he’d managed to ‘fix’ the numerous problems with the benefit:

The chancellor has announced a boost to the work allowance as an answer to these problems and he expects credit for it. But… scratch beneath the surface and we find that this boost only reverses half of the cuts that were made in the 2015 budget.

The MP also took aim at the government’s record on the living wage. Because as she pointed out, the ‘living wage’ is nothing more than a rebranding of the minimum wage. And as the Living Wage Foundation highlights, the amount people actually need to live is much higher than what the government sets.

They’ve slightly increased the minimum wage and it still doesn’t meet the cost of living. And no amount of rebranding will make anyone forget that.

Given that when she was elected in 2015, she was the youngest MP to enter the Commons since 1667, she is well placed to take on the age discrimination element of the living age. Currently, those under 25 are entitled to 50p less an hour than those over 25:

As a 24 year old, I would challenge anyone… to justify why I should be paid less than anyone else… because if the law doesn’t apply to me, why should it apply to anyone else out there?

“The claim that really sticks in my craw”

However, it was Hammond’s claim that the government ‘supports families’ that Black said “really sticks in my craw”, given the two-child cap on benefits. Her reasons were explicit:

Because if it was true that the chancellor is supporting families, if that was true, he would not make women have to prove that they were raped in order to get benefits for their children.

This seemed to make some Conservative MPs uncomfortable:

I see that not many Tories are giving me eye contact

Over 73,000 households [are] receiving less tax credits than before. And what is this government’s response? And this is a quote: ‘people on welfare need to make decisions about the number of children they may or may not have’.

And she didn’t pull any punches in her assessment:

That statement is as barbaric as it is downright stupid. Nothing more ignorant, cruel and deliberate misconception to hide behind… Life does not happen like that.

Black concluded by saying that Scotland did not have the powers to fix the problems because benefits were seen as “too important to be devolved”. And she was fierce in her message to Conservative and Labour politicians:

So don’t dare turn around and say that Scottish people should fork out more money to plug holes in policies that they didn’t vote for.

Her conclusion, meanwhile, was damning:

Let’s be clear. This budget delivers austerity and simply gives it a different name.

Black’s passion and commitment are clear in every word. She spoke for just over four minutes and not a word was wasted. And in a parliament that the shadow education secretary recently described as a “pantomime”, this is desperately needed.

– Support The Canary so we can keep bringing you truly independent journalism.