Corbyn exposes high cost of 25 years of private rail, and the figures are shocking | The Canary 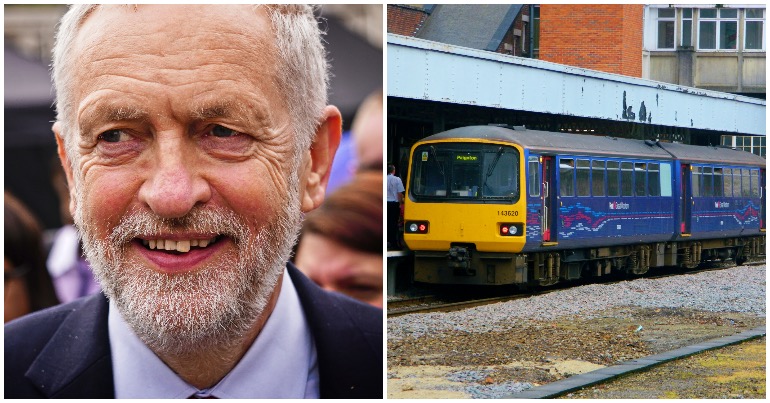 It’s now 25 years since the passing of the 1993 Railways Act that privatised British Rail and subjected commuters to a quarter of a century of travel misery.

And as an anniversary gift, Labour has dropped some truth bombs about the staggering cost of this failed rail experiment.

Calling privatisation a “catastrophe” and a “failure”, Labour leader Jeremy Corbyn laid out the facts:

25 years of rail privatisation have been a total disaster. pic.twitter.com/kXZwUZFeGF

the government is ploughing in around £5bn directly each year and another £4bn into the growing debt of Network Rail. Before privatisation, it was just £2bn in today’s money.

He also raised the issue of high season-ticket prices. From Rugby to London, for example, he said a season ticket has risen by around £2,000 under the Tories since 2010. Elsewhere, evidence suggests that this phenomenon is pushing commuters away from rail. And all of this during an ongoing climate catastrophe.

The rise in standard rail fares is also breathtaking. The Independent claims that:

peak-time single ticket from London to Manchester has increased by 238 per cent, from £50 to £169 – three times the rate of inflation during the period.

Mind the huge gap in the Tory response

The Tories’ response to Labour’s claims speaks for itself. Because they audaciously claim privatisation has:

improved the railways for passengers and taxpayers.

This is despite survey evidence showing that two thirds of British commuters believe their journeys do not represent good value for money.

put politicians in control of our vital services, meaning nowhere for people to turn when things go wrong.

But it’s unclear, of course, how unaccountable private companies give passengers greater control. In fact, after recent timetable chaos, the Office of Rail and Road (ORR) claimed precisely that it was a lack of “accountability” in the current privatised system that was to blame.

Perhaps the most outrageous claim by Johnson was that Labour’s renationalisation proposals were “ideological” (as though Tory privatisation isn’t).

In an interview with Owen Jones, however, former Labour secretary of state for transport Lord Adonis tore apart this claim:

He relays his belief that secretary of state for transport Chris Grayling bailed out private rail franchises on the East Coast Mainline for – you guessed it – ideological reasons. This was instead of the companies incurring a loss for underbidding, which Adonis claims:

The whole point about bidding is that the private sector takes on risk.

So why did Grayling do it? Adonis claims that:

he thought that [nationalising] would be giving a political point to Jeremy Corbyn. But actually, his job is to defend the taxpayer! This isn’t a right-wing or a left-wing thing

Labour’s reassertion of its commitment to renationalisation is welcome. It’s time for the privatisation gravy train to be derailed, and for commuters to no longer be treated like cash machines.

– Support the Canary so we can keep holding the powerful to account.

– Support the campaign to Bring Back British Rail.