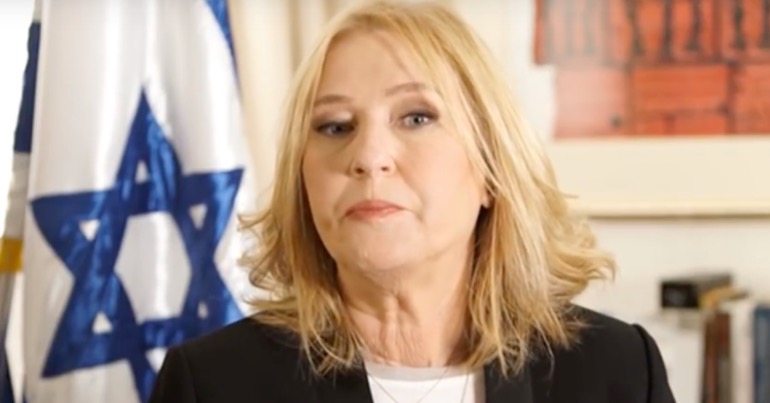 Condemnations have flowed after former Israeli foreign minister Tzipi Livni claimed to have met with “representatives of Young Labour”.

But the official Young Labour is furious. Because it insists that those attending represented only themselves; and it describes Livni as a “war criminal”.

Not in our name!

It was great meeting with representatives of Young Labour and hearing of their bold opposition to the anti-Semitism that is raising its ugly head. We stand with our brothers in Britain and around the world against these worrying trends pic.twitter.com/jhvVGBcYqg

But Young Labour was quick to respond:

As Israel’s foreign minister during the Gaza War, Tzipi Livni oversaw the massacre of 1,391 Palestinians. According to Israeli human rights group B’Tselem, at least 759 were noncombatants. The individuals meeting this war criminal are in no way representative of Young Labour. https://t.co/v4U8H9GmmT

It then retweeted condemnations by actual Young Labour representatives and members:

Appalled to see Labour members meet with a war criminal who can't even come to Europe in fear of being convicted for her role in the collective punishment of Palestinians.

Rest assured Young Labour had nothing to do with this meeting and will continue to oppose illegal wars. https://t.co/lfyVeNO2zJ

I fully condem this meeting which was in no way orchestrated by the Young Labour commitee. I hope to emphasise and reassure our membership that our commitee will always refuse to engage with the war criminals which destroyed the human rights of the Palestinian people. https://t.co/CKUpPYdFz0

Who is Tzipi Livni?

Livni is currently chairperson of the opposition in Israel. But she has served as a minister in previous governments.

While she was foreign minister, Israel dropped 1,500 tons of bombs on Gaza during its 2008/9 attack on the occupied territory. This included weapons like white phosphorous. According to Gazan human rights advocate Raji Sourani, bombing was aimed at the most densely populated civilian areas. The UN human rights council, meanwhile, determined that the purpose of the offensive (which Israel called ‘Operation Cast Lead’) was to:

Israeli human rights group B’Tselem estimates that Israel killed 1,391 Palestinians in Gaza in the offensive, 759 of whom were civilians. Amnesty International claimed the number of death was so high because Israeli forces “frequently obstructed access to medical care”.

Israel demonstrated real hooliganism during the course of the recent operation, which I demanded.

Arrest warrants for Livni, and the position of UK politicians

As listed by Trial International, Livni’s involvement in the attack on Gaza has led to a series of international arrest warrants issued against her, ranging from the UK to Belgium and having been considered by Switzerland.

Livni was helped in no small part in the UK, however, by David Cameron – whose government changed the law governing arrest warrants. This allowed the Director of Public Prosecutions to veto arrest warrants, such as that issued by Westminster magistrates court for Livni’s alleged war crimes.

In 2010, for example, he described Livni as “a war criminal”. And he opposed the Cameron government’s arrest warrant legislation, citing Livni specifically.

Well done to the new left of Young Labour

Young Labour, increasingly freed from the shackles of right-wing control, has now taken a strong position on Livni. And that is very refreshing to see.