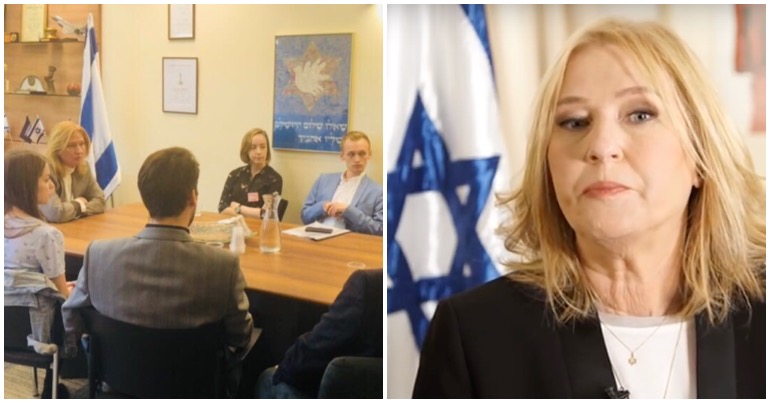 As The Canary previously reported, Young Labour has expressed anger at being wrongly associated with a meeting with former Israeli foreign minister Tzipi Livni, whom it called a “war criminal”.

Now, the Labour members who attended the meeting have been revealed. And the reasons they’ve given for attending have come under intense criticism.

So who were they?

Those identifiable in the picture which Livni tweeted out appear to be from the right of the Labour Party and associated with groups which are outspoken critics of part leader Jeremy Corbyn.

They apparently include national organiser for Labour First, Matt Pound; Laween Atroshi, vice chair of the Young Fabians; current and former associates of the Tony Blair-funded Progress such as Jasmin Beckett; and Lambeth councillor Danny Adilypour.

A member of Amnesty?

Adilypour lists under his council register of interests his membership of Amnesty International:

one of the most cowardly and vicious exercises of military force in recent memory, as a defenseless civilian population, trapped with no way to escape, was subjected to relentless attack by one of the world’s most advanced military systems.

The Canary contacted the apparent attendees for comment, but none responded. But some did post defiant tweets.

They are hypocrites. As is he. We need to build allies on the left of Israeli politics if we are to achieve peace in the region, not condemn politicians who could immeasurably ease the suffering of the Palestinian people.

He also said meeting Livni was “an incredible privilege”. But there was no mention of Israel’s 2008/9 massacre of civilians in Gaza while Livni was foreign minister.

Jasmin Beckett, meanwhile, argued that “boycotting dialogue leaves no room for peace in the Middle East”. She was previously accused of an ‘antisemitism’ smear campaign against an opponent during a controversial race to be a youth representative on Labour’s national executive committee (NEC) in 2016.

Jewish News journalist Jack Mendel, meanwhile, attacked Young Labour and suggested that meeting Livni was an opportunity to hold her to account:

Young Labour's reaction smacks of the worst kind of flippant, ill-thought-out attention seeking response. Maybe they met with her and asked her about her decisions during her time as a minister? Maybe they held her to account?

The response from @YoungLabourUK is entirely legitimate. Tweet from @Tzipi_Livni suggested that you were engaging as Young Labour which is evidently incorrect. Wider issue of your ‘delegation to Israel’ can also be legitimately debated and discussed. https://t.co/oBV1BFkP9A

Tzipi Livni is a centre-right politician… her politics are not progressive in any way and @YoungLabourUK have already made the case about her being investigated and at risk of arrest for alleged war crimes. https://t.co/Jf5vWNEZZM

Okay, so you want to build allies on the left or Israeli politics… have you tried engaging with @Hadash_org @meretzparty @omdimbeyachad the joint list etc? Did you engage with any Israeli human rights organisations like B’Tselem or Gisha? https://t.co/J7eac9jpqy

So many centrists in Labour don’t actually give a shit about solving a 70 year old conflict, just want to get pics of themselves in meetings with seriously dodgy individuals so as to make themselves look important. https://t.co/tGJtzm5XVV

The question isn’t whether Labour members have a right to meet Livni… of course they can meet her. The question is whether it is appropriate to meet her if the idea is to promote peace considering Palestinians view her as a war criminal & she is under investigation for such. https://t.co/nLvWmC8av4

The Canary also spoke to Josh Jackson, a Labour youth officer from Aylesbury. He said of the Livni meeting:

as someone who sat and watched the debate on Palestine at conference, and heard stories of the most horrific atrocities committed against the Palestinian people – policies carried out and supported by Tzipi Livni, I think it’s a disgrace to the principles Labour endorsed at conference and a disgrace to pass off criticism of this meeting as a factional point scoring when each day people are dying.

In particular, he said:

It also means that people like Tzipi Livni have a propaganda victory because she can say ‘look at these Young Labour representatives meeting with me’.

And regarding the idea that the meeting was about finding ‘balance’, he stressed that:

the mistake in this dialogue of ‘talking to both sides’ is that the person… chosen to speak with on the Israeli side is someone who is a designated war criminal. That’s not having a balance, that’s clearly skewing to one side.

Finally, he insisted that:

ultimately, it’s just sad and cheap that the lives of over a thousand Palestinians dead at the hands of this woman… can be so easily forgotten about when there’s a hit against Jeremy Corbyn to be made.

A popular attack against Corbyn focuses on his consistent approach to dialogue and negotiating peace with non-state organisations whose state opponents tend to call ‘terrorists‘. But in this case, the Labour members who met Livni have clearly been trying to disguise Livni’s extremism and rebrand her as a moderate in spite of the allegations of war crimes which fall firmly at her door (journalist Ben White has previously analysed the problematic idea of a ‘moderate Israeli left’ on the issue of Palestine).

The fact that some people on the Labour right try to take a moral high on some issues but are then happy to associate with someone as ethically repugnant as Livni is very revealing. The meeting with Livni also demonstrates a sense of entitlement to power that some on the right of Labour have (forming their own delegation to meet with foreign officials). It also exposes the double standards of the British media, as this incident has passed by without so much as a whisper of condemnation. Once again, it seems to suggest that the crimes of the West’s allies don’t count. And that is utterly unacceptable.