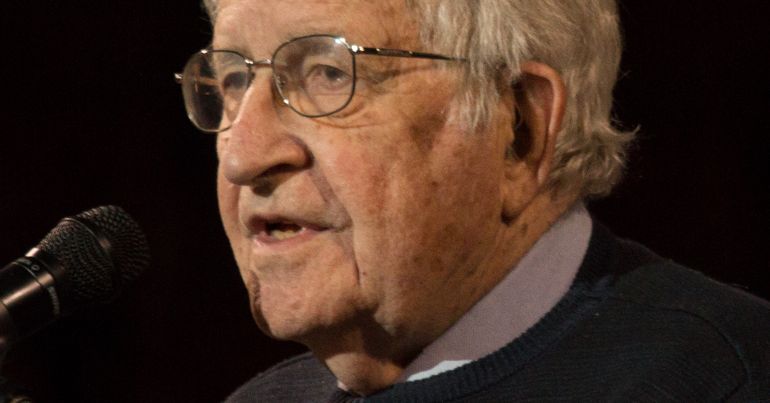 Noam Chomsky just gave an extended interview to Democracy Now!. And he focused on key issues that the US mainstream media barely mentioned during its mid-term election coverage.

The core issues facing our species, he said, are: climate catastrophe, nuclear weapons, species loss, and rising fascism. He also noted that, during this election cycle, corporate media has continually failed to cover these four key issues adequately.

For Chomsky’s full interview, see the videos below:

A recent report by the Intergovernmental Panel on Climate Change (IPCC) noted that “[l]imiting global warming to 1.5C would require rapid, far-reaching and unprecedented changes in all aspects of society,” but is still, for now, doable “within the laws of chemistry and physics.” There was a flurry of attention paid to this near-death-knell. But it soon disappeared under several news cycles.

This is nothing new, though. Because reports like The Truth about Climate Change by the Universal Ecological Fund in 2016 got even less attention.

Climate scientists like Michael Mann, meanwhile, have previously discussed the well-founded suspicion that the IPCC’s consensus model of publication biases their reports towards relative optimism. So things might be even less hopeful than they appear.

Along with rejecting the already insufficient Paris Accord on the climate change crisis and destroying the Iran nuclear deal, the Trump administration recently pulled out of the 1987 Intermediate-Range Nuclear Forces Treaty (INF). The damage extends beyond the INF, though. Because arms control in general, as the Bulletin of Atomic Scientists puts it, is “on the brink.” Trump may well spike extending the New START (‘strategic arms reduction treaty’) as well.

Already at two minutes to midnight, tied for the closest it’s ever been, the Doomsday Clock will no doubt approach even closer to midnight next year. True, Barack Obama proposed a trillion-dollar nuke “refurbishment,” but Trump is making it happen while pulling out of international treaties.

The threat of nuclear winter (which the New York Times tellingly relegated to its “Retro” series) poses an odd irony. In an age of ‘global warming,’ the end may well be ice, not fire. And there needn’t be a full nuclear exchange, either: at the first detonation of even a “dirty bomb,” that would likely be the end of liberal democracy.

Related to climate chaos, species loss is approaching levels of previous “mass extinction” that the planet has suffered. Except this time, we humans are the asteroid.

The issue, as the World Wildlife Fund puts it, is not just about the survival of other species. This “sixth mass extinction” directly threatens human existence as well: so what is called the ‘Anthropocene’ (named after us) may well be the last geological epoch we get to name.

Perhaps worst of all, the mainstream media mostly refuses to truly confront rising fascism, let alone its ultimate cause (neoliberalism). It has also barely touched upon how this phenomenon makes all three existential threats above much worse, both by causing them to come to fuller fruition faster and by feeding off the increasing dislocation they will encourage. The topic is all too often left to academics like Timothy Snyder and Jason Stanley to sound the alarm in (ignorable) opinion pieces.

We need to fight hard on all four fronts

These four issues are intimately linked. If we are battling the far-right tide, we risk losing vital time for battling climate change. Climate change, along with species loss, itself eats up resources and increases human migration. And both of those outcomes risk making authoritarianism seem more attractive. Consider, for example, how the US and the EU reacted to a couple million Syrian refugees; then consider how the international system would react to 100 million people fleeing their home countries.

In the mid-term elections, the Democrats took the House – by a hair. And while that may help a bit, we all need to step up and act too. Because the stakes have literally never been so high.

– Consider joining organisations such as Global Zero, 350.org, the World Wildlife Fund, and the ACLU (US) or Liberty (UK).

– Write to your MP in the UK or congressperson in the US. Ask them to support green policies, nuclear arms control and disarmament, and strengthening democratic institutions.