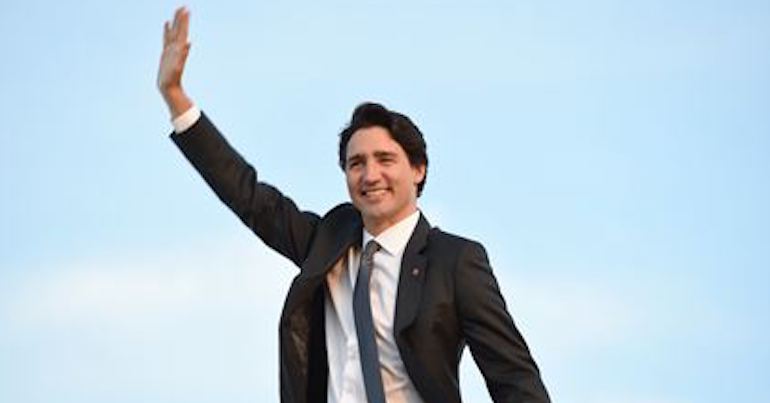 Canadian prime minister Justin Trudeau has shamefully linked legitimate criticism of Israel with violent antisemitic crimes. In short, he threw Palestinians living under violent occupation even further under the bus.

On 7 November, Trudeau gave a speech that was meant to offer an apology to Jewish refugees who fled persecution in World War Two. In 1939, over 900 Jewish people fled from Nazi Germany on a boat. Cuba and the US turned them away. Then Canada also refused them asylum.

During the ‘apology’, Trudeau acknowledged and lamented that antisemitism is still rife. But he then went on to say:

Jewish students still feel unwelcomed and uncomfortable on some of our college and university campuses because of BDS-related intimidation. And out of our entire community of nations, it is Israel whose right to exist is most widely and wrongly questioned.

The Boycott, Divestment, Sanctions (BDS) movement is a:

Palestinian-led movement for freedom, justice and equality. BDS upholds the simple principle that Palestinians are entitled to the same rights as the rest of humanity.

And people quickly took to social media to challenge Trudeau for apparently equating BDS to antisemitism. Some pointed out that he twisted “Canada’s history of white supremacy to throw Palestinians under the bus”:

During an apology for Canada's past rejection of Jewish refugees, @JustinTrudeau pivoted to condemn BDS, equating it with hate crimes & violence. He used Canada's history of white supremacy to throw Palestinians under the bus (who had nothing to do with this). #cdnpoli #StLouis pic.twitter.com/eu9Tktvr0H

I mean, @JustinTrudeau literally equated criticism of Israel (and boycotting a state) with hate crimes and the Pittsburgh terrorist. How incredibly disgusting to weaponize the tragedy of white supremacist violence against Palestinians peacefully resisting occupation.

As journalist Max Blumenthal explained, Trudeau effectively flipped his apology on its head to “demonize” thousands of displaced and oppressed people:

BDS is a peaceful means to oppose the horrific situation for people in living in occupied Palestine. Israel has met peaceful protests challenging this occupation with extreme violence. In April, a UN statement clearly stated that Gaza is under “military occupation”. And it warned against Israel’s continued use of “excessive force”.

Since 2000, Israeli armed forces or settlers have reportedly killed over 2,000 Palestinian children. Around 1,600 of these deaths occurred in Gaza. Everyone living in Gaza, meanwhile, is under siege in what many call an open-air prison. According to Human Rights Watch: “nearly 2 million Palestinians, including 1.3 million refugees, live in Gaza”.

It’s vital to challenge antisemitism wherever it exists. But for Trudeau to cynically link violent antisemitic crimes with a peaceful movement to support the besieged Palestinian people is absolutely unforgivable.

– Join The Canary, so we can keep holding the powerful to account. And see previous Canary articles on Palestine and Israel for more.