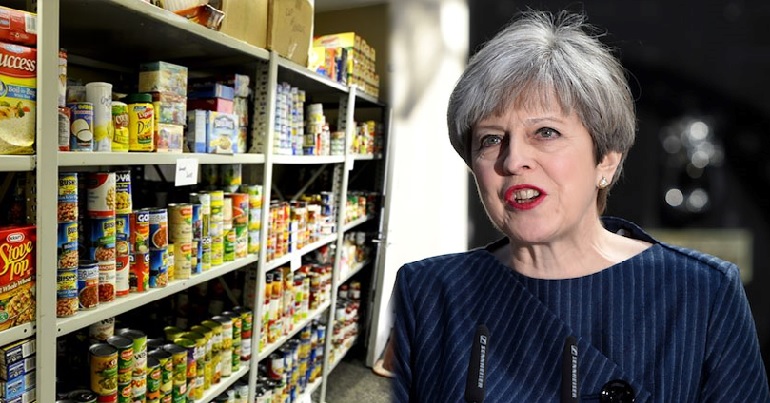 UN investigator Philip Alston is currently touring the UK to assess the scale of damage that Conservative-led austerity has caused in recent years. And he has slammed the government for outsourcing the task of ‘keeping people alive’, just as newly released figures show food-bank use is continuing to rise.

Announcing a 13% increase in food-bank use on the previous year, the Trussell Trust insisted on 6 November:

Foodbanks cannot continue to pick up the pieces – we have to make sure our benefits system can protect people from hunger.

This morning we release #foodbank figures for April-Sept 2018, showing a 13% increase on the same period in 2017. #Foodbanks cannot continue to pick up the pieces – we have to make sure our benefits system can protect people from hunger. More here > https://t.co/Eh10r6zFxK pic.twitter.com/5grY4js6hw

#Foodbank figures for our network are soaring – and these numbers don't account for help given by other food banks. Our network accounts for roughly 2/3 of food banks across the UK – so we know the scale of need is even bigger @IFAN_UK#StopUKHunger > https://t.co/afpnAhGJdR pic.twitter.com/IWGrs8paf0

Meanwhile, media reports suggest that many people are now “surviving day by day”:

“The #foodbank volunteers explained: “We can barely cope. Many are forced here while waiting for their #UniversalCredit to start. Some had delays of ten weeks. People are surviving day by day.” 4/5 > https://t.co/GFyDA3p8Fn

And some of the accounts are utterly harrowing:

“With hunger growling in his stomach, a man in his 30s collected an emergency food parcel, ripped the bag open, unscrewed a jar of peanut butter and began frantically scooping it into his mouth”. Is this the country we want? https://t.co/34vI98M9i3

"A woman with 3 children arrives at the #foodbank distraught & crying. Her friend admits she’d been “doing favours” for her landlord to help pay rent after losing some of her benefits but has now been evicted: “He abused her & now she is alone. She slept in an abandoned car" 2/5

UN investigator speaks out: “you have issues here”

Speaking outside a Newcastle food bank which featured in the film I, Daniel Blake, Alston said:

Alston also insisted that food banks were essentially turning into a “real safety net so that [people] don’t quite starve”, in the absence of effective government support. And he stressed that the government risked sending out the message that it “can just outsource these things” in the “hope that a private community is going to take it up and keep people alive”. That, he suggested, was unacceptable.

An end to austerity?

Between April 2017 and March 2018, Trussell Trust food banks distributed around 1.3 million three-day emergency food packages – 484,026 of which went to children.

And it is the Conservative Party’s capitalist extremism (neoliberalism) that led us to this point. This failed ideology, which hits the poorest people the hardest and only makes sense for the very richest, was not a necessity. The Conservatives chose to implement it – and they chose to do so in spite of all of the evidence against the doctrine, and the inequality and suffering it leaves in its wake.

– Firstly, join the fight against the root causes of today’s problems – austerity, cuts, exploitation, and inequality. Also join a union, activist group, and/or political party to make your voice heard.