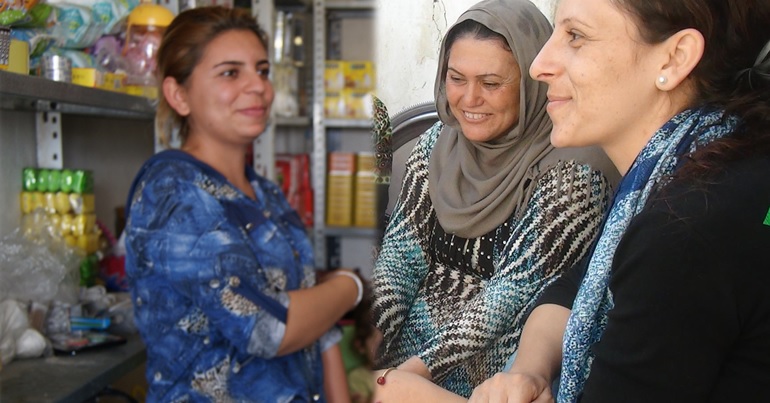 A progressive revolution has taken northern Syria by storm in recent years. And The Canary has now obtained an insight into the growing cooperative economy in the region, with a particular focus on the empowerment and liberation of women.

“Another economy is not just possible: it’s already happening…”

The Canary caught up with Co-operation in Mesopotamia co-ordinator Jo Taylor, who recently visited cooperatives in northern Syria. Her project is part of the Solidarity Economy Association (SEA), which seeks to promote the ‘solidarity economy’ in the UK and around the world. The SEA describes the ‘solidarity economy’ as “a grassroots economy built by the people, for the people, and the planet”; one that “embodies the values of economic and social justice, diversity and pluralism, co-operation, self-management, and ecological sustainability”. And it stresses that:

Another economy is not just possible: it’s already happening.

The values at the heart of this alternative economy are “self-help, self-responsibility, democracy, equality, equity and solidarity”, and its supporters believe that “radical changes to our political, financial and commercial systems” are necessary to build such an economy.

And as Taylor told The Canary, the Democratic Federation of Northern Syria (DFNS) – aka Rojava – is one place where people are already building such an alternative. She explained that visiting Rojava:

changed my life, because I saw there was really a revolution happening in my lifetime. It showed me that something was possible which I didn’t think was possible.

Visiting co-ops on the ground in Rojava

Earlier in 2018, Taylor was part of a delegation whose purpose was to visit cooperative organisations in Rojava. She told The Canary:

We saw a number of different co-ops. We visited a really small bakery co-op in quite a remote village – with very simple dwellings. There are a few villages around there that are quite removed from cities and places with shops; so it has been difficult for them, especially with the war economy, to get bread and anything else. The bakery co-op is run by women. And they told us it’s the only bakery for 14 miles; so they’ve basically brought bread to the area.

This is a good example of quite a lot of the co-ops in Rojava. They belong to the neighbourhood assembly structures; they’re created according to need; and they’re in the hands of that community.

She went on to explain:

Some of them have been going for years now. There’s a big agricultural co-op called ‘Kasrik’. That was one of the first co-ops that they set up four or five years ago. And it’s really big. It’s got something like 5,000 people. There’s a community share system; so anyone living in that region can buy a share, or up to 10 shares. They’ve got an upper limit on it to prevent monopolies. There are lots of monopoly-prevention rules.

The workers are often elected; sometimes they rotate. They’re paid the same rate. Generally in Rojava, there’s a system of pay parity. And they make their decisions together. Then they have dividends; some of them are paid out every six months.

The need to re-skill

Taylor’s delegation also visited women-led agricultural projects which focused on training people up in essential skills. This was necessary, she explained, because the Assad regime has long seen the north-east of Syria in particular as the ‘bread basket of Syria’. For that reason, wheat cultivation has been dominant for decades. And together with deforestation and the use of chemical fertilisers, this monoculture has both damaged the land and resulted in people losing skills. As Taylor stressed:

She also explained that:

Ecology is part of the ideological background to the revolution. So there’s a big will to make a more ecological system.

While the self-governing system in Rojava is moving away from previous practices – due to both ideology and necessity – Taylor insisted that people desperately need training. Currently, for example, there are problems with growing produce in the absence of chemical fertiliser; and because of war-time restrictions, prices are sky high. As a result, the need to learn quickly is urgent.

Taylor also spoke about Rojava’s ‘women’s village‘ – a place embodying the women’s liberation at the heart of Rojava’s governing ideology:

It’s an exciting project; the first women’s village in the Middle East. It’s over half-way built, but people haven’t moved in yet to live there. As well as being a women’s village, it’s also supposed to be an ecological village. It’s a showpiece and a ground for experimentation. They’ve built the houses by hand. And they’ve just got some solar panels; so that will be a first for the region too.

People there will be living in a communal way according to the ideology of the revolution. So there’ll be a commune; they’ll have their assemblies; they’ll make their decisions collectively. There’s also a plan to have a bakery that belongs to the village.

She then elaborated on the village’s role in empowering local women, saying:

Women-only projects don’t exclude men; they just put power in the hands of women. In the Jinwar women’s village, there was this great story of this very traditionally dressed conservative woman from nearby who came out of curiosity and to help out with the building of the houses and everything. She’s really involved there now; she’s on the committee. The husband had forbidden her from going there. But she refused to do what he wanted, and just kept going. Her daughter and son then started going there to hang out after school. And now, he’s going there as well; and he loves it. He eventually just got won around, because they weren’t excluding him. They were welcoming to him, while saying ‘we’re not going to accept that you don’t want your wife to come here’. It’s a really cool example of how they win people over.

Challenges and opportunities for solidarity

When Taylor first visited Rojava two years ago, the main threat to the political experience was still Daesh (Isis/Isil) terrorism. But as she explained:

Turkey is such a much bigger threat now. The border wall has been completed. And now, people are driving different routes because, if you drive along the border, you might actually just get shot at in your car.

In this hostile environment, the progressive revolution needs all the support it can get. For that reason, Taylor and the SEA have been spreading the news about Rojava around the UK through workshops and a website with information about the region’s alternative economic system. They are also beginning to set up twinning projects between co-ops to foster greater links and solidarity. And Taylor called on Canary readers to join in these efforts. So you can attend workshops, explore the website and sign a solidarity agreement, or get in contact with the SEA to find out more.

As Taylor’s experience shows, Rojava is a beacon of hope and progress in the Middle East. In the middle of Syria’s brutal, destructive war, co-ops and other groups there are planting the seeds for a brighter future. The system they’re building, meanwhile, believes firmly in women’s liberation and an economy that serves ordinary people and the planet above all else. It’s a real alternative to the world’s capitalist status quo. And it’s growing and thriving as we speak.

– Taylor made a specific call for support from solar power experts and people who can teach food preservation skills. She also invited co-op members to invite the SEA along to speak at events, and to sign the website’s solidarity agreement. Please email [email protected] if you can help out.

– Learn more about the inspiring process underway in Rojava in this introduction book or this detailed investigation.

– In the UK, ask Theresa May and your MP to recognise and support Rojava, and to stop selling arms to countries like Saudi Arabia and Turkey which have been fuelling the Syrian conflict from the very start. In the US, contact your representative and senator.

– Join or support the Stop the War Coalition. Also show your support for Veterans for Peace, who are fighting for peaceful solutions to the world’s problems. And take action with Campaign Against Arms Trade.

– Support The Canary if you appreciate the work we do. Also see more Canary articles on Rojava; and for more Global articles, follow us on Facebook and Twitter.