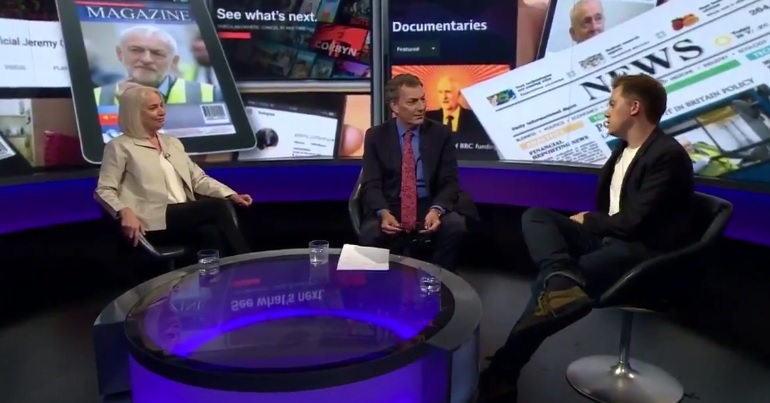 Owen Jones delivered a delicious takedown of a Sunday Times editor on 23 August.

that’s probably one of the most ludicrous propositions I’ve ever heard.

Isn’t it just. But it’s not surprising that an editor at one of Rupert Murdoch’s rags would try and convince people that’s the case.

Corbyn recently laid out Labour’s plans to reform Britain’s media landscape. Proposals include removing political influence from the BBC by allowing licence fee-payers, rather than government, to elect representatives to its governing board. They also include setting up a fund to help pay for public service journalism, paid for by “digital monopolies”, aka big tech companies.

The International Federation of Journalists (IFJ) has “warmly welcomed” the proposals. The National Union of Journalists (NUJ) has also greeted the plans with praise. Baxter, however, doesn’t appear to be a big fan. And Jones made sure to point out why on the BBC programme.

The Sunday Times deputy editor tried to paint Labour’s proposals as a power grab on Newsnight.

"This is a big trojan horse which has a few nice proposals like extending freedom of information which I am all for as a means of inserting placemen into the control of the media," says Sarah Baxter. @SarahbaxterSTM | @BBCTwo | #newsnight pic.twitter.com/Rhjtgg8cgv

She claimed that the suggestion public trust in media is low is “nonsense”, and that:

We’re in a golden age of more diversity and more opinion than ever across the spectrums.

In short, she effectively argued that there’s absolutely nothing wrong with the British media, so the plans can only be “a bid by Jeremy Corbyn to take control of the media that he doesn’t like”.

But, as Jones pointed out, there is a problem with the British media. In fact, there’s a few.

The media is one of the most socially exclusive clubs in Britain, and most of our press are the playthings of super rich media moguls. That's bad for our democracy. pic.twitter.com/cZs05T2Sn9

The problem with the media is twofold. Firstly, it is the most socially exclusive profession, other than medicine…

The other issue… [is] most of the press in this country is run by a very small group of media moguls, like Rupert Murdoch

So, the moguls’ playground that passes for Britain’s national press isn’t representative of the people it’s providing ‘journalism’ for. Not only because of who its owners are, but also because a disproportionate number of high-profile national reporters went to private school in comparison to the rest of the population.

No wonder then that, as Jones says, there is a “massive crisis in trust” in Britain’s media.

Clearly, new media is helping to ensure there is “more diversity” in journalism. Of course, its rise has largely occurred because there’s such a lack of that in the mainstream press. But diversity and a range of opinion needs to be part and parcel of the national news – and the country-wide conversation it dominates.

That Corbyn’s plans are facing resistance from those who prosper in the current elitist system shows they’re on course to do exactly that.