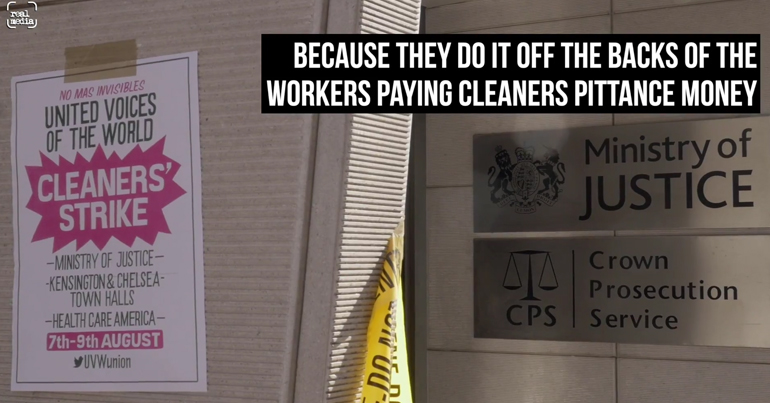 In just 30 days, United Voice of the World (UVW) has helped change the lives of hundreds of workers. And they say there’s much more yet to come.

UVW is a grassroots union representing predominantly migrant workers in the UK. Since it started in 2014, the union has improved working conditions for a range of workers across London. This includes having cleaners reinstated after Sotheby’s dropped their contracts in 2015, and improved pay for cleaners at the London School of Economics in 2017. But since July, UVW’s actions have been more successful than ever.

From 7 to 9 August, UVW and its members held two simultaneous strikes demanding cleaners receive London Living Wage of £10.20 per hour. Both strikes resulted from a 100% yes votes by members.

They included about 50 workers from the Ministry of Justice (MoJ) and Royal Borough of Kensington and Chelsea. And they were joined by dozens of people showing solidarity including shadow justice secretary Richard Burgon and Labour MP for Kensington Emma Dent Coad. The three days of action included picket lines, rallies, salsa, storming a council meeting, a building occupation, and “joy and rage”.

Although no demands were met during the strikes, UVW said on 9 August that it “will be back”. As a result of the strikes, the union also announced on 17 August that security guards at the MoJ have joined. And they would be alongside cleaners in the “next round of strikes”.

UVW said on 22 August it would carry out strike action against HCA Healthcare UK following a 100% yes vote from its members. Despite Compass Group, which contracts cleaners for the private hospital chain, offering a 17% to 20% pay rise on 21 August, the strikes will go ahead as planned. The union welcomed the offer but said it was a “bid to deter” strikes and failed to meet the strikers’ demands.

The union also said strike action against HCA would be co-ordinated with the second round of strikes against the MoJ and Royal Borough of Kensington and Chelsea. This is part of a move the union calls the “Triple Strike”.

These successes have led to UVW’s rapid growth. For seven consecutive months, it has grown by 100+ new members a month. Although this is a small percentage of the more than six million [pdf, p6] trade union members in 2017, UVW’s success has helped workers from some of the most precarious and marginalised backgrounds.

On 23 August, it announced it would be joining forces with PCS union to strike against another government department. It said the move will fight for a London Living Wage for “cleaners, security and all outsourced and support staff” at the Department for Business, Energy and Industrial Strategy.

In New Socialist, writer Joe Hayns says UVW’s Triple Strike model shows two crucial things. First, how the “most subordinated” sections of the working class can organise and win demands. Second, that single-workplace campaigns aren’t a limitation for UVW. And the collaboration with PCS to widen its next round of strikes illustrates this.

Despite being a “tiny gig economy union”, UVW has had concrete impact on the lives of hundreds of migrant workers. As precarious employment becomes increasingly normal, traditional trade unions have struggled to keep pace. But UVW is bucking that trend in the most impressive way possible.

You can watch a Real Media video about the strikes here:

– If you know someone that could benefit from joining UVW, please suggest it to them.

– Donate to UVW so it can continue winning campaigns for migrant and precarious labour.

– Watch this video by Real Media to learn more about the union.

– Read more at The Canary about UVW.