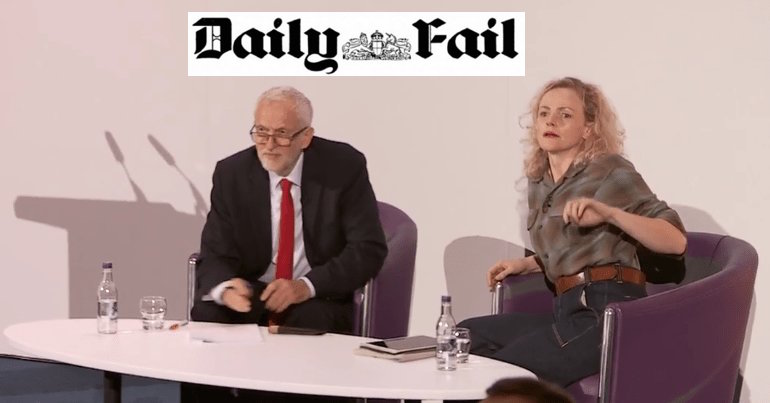 During a Q&A section after Jeremy Corbyn’s media speech, an immigrant in the audience owned a Daily Mail journalist.

The Mail reporter was trying to smear the Labour leader:

A cynic might say that your proposals to dismantle traditional newspapers… could be an act of retaliation over the way that they’ve shone a light on antisemitism within the Labour Party and more recently exposed your involvement in that wreath laying ceremony. What’s your response to that?

Until one woman retorted:

First of all, as an immigrant, I want to say that the Daily Mail waxing anything about morality is ridiculous.

The following front pages may shine a light as to why:

Today's Daily Mail claims yesterday's peaceful protest in London "shames Britain". Share if you think headlines like this do more to shame our country than hundreds of thousands of people across Britain exercising their right to free speech & freedom of protest #DetoxTheDailyMail pic.twitter.com/1ieJiIIUpR

The Mail journalist claims the press “exposed” Corbyn over the Tunis Wreath row. The thing is, the media has been smearing Corbyn via association with terrorists who weren’t even buried at the cemetery he attended. Yet again, an establishment ‘story’ about the Labour leader collapses under rudimentary diligence.

After owning the Mail, the woman went on to ask Corbyn about the lack of accountability in the mainstream press. In response, the Labour leader spoke against journalistic malpractice:

When somebody is accused in a newspaper the right of reply… has to be to the same proportion as the story that’s there in the first place. Three lines on page 27 after five days of front page doesn’t feel like a right of reply.

The Labour leader wants to democratise the UK media through establishing elected editors, distancing the BBC from the government appointee system, and introducing charitable status for independent, public-service media.

During the Q&A, the Mail journalist claimed that Corbyn’s proposals could be an “act of retaliation”, but the plans tackle systemic problems in the UK media. As veteran mainstream media anchor Jon Snow laid out from the inside:

Channel 4’s Snow continued, saying in order to get a mainstream media staff job you need:

a masters degree, a series of unpaid internships, and a place to stay in the London area, without any guarantee of it working out. Barriers to entry into this highly competitive industry largely on the basis of background rather than merit. It’s a central cause of our disconnect.

A Corbyn-led Labour Party has already pledged [pdf p50] to ban unpaid internships, simply because “it’s not fair for some to get a leg up when others can’t afford to”.

The Mail and co’s antisemitism smear campaign is merely a symptom of the wider structural problem in the UK media. Antisemitism does exist across British society. But the media has weaponised the serious issue to delegitimise Corbyn.

If a handful of billionaires didn’t control much of the flow of information in this country, a man of peace would not receive such treatment.

Kudos to the audience member for owning the Mail with its own hypocrisy at the Edinburgh Q&A.

The exchange reported on here begins at 44:49: