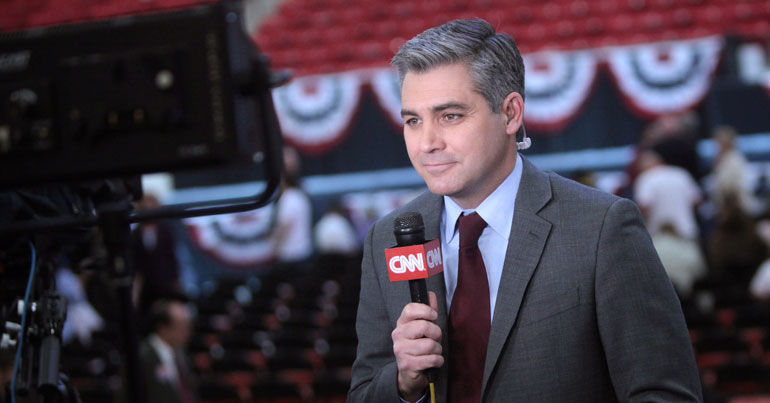 Twitter has responded angrily after CNN White House correspondent Jim Acosta had his press credentials revoked. He had been trying to ask Donald Trump about the ‘caravan‘ of refugees currently fleeing toward the US from Central America. But Trump reacted aggressively, and a White House aide attempted to grab the microphone from him. And since then, it’s all spiralled out of control.

During a press conference, Acosta asked Trump about the language he has used to describe refugees. But Trump immediately began to talk over him, saying:

That’s enough, put down the mic

Acosta refused (politely) to surrender the microphone to the “grabby Trump aide”:

The grabby Trump aide is giving off such Head Girl Energy. Footsoldiers of authoritarianism, the lot of em. pic.twitter.com/8VDRy58DsS

Trump then called him a “rude, terrible person”, and said he “shouldn’t be working for CNN“.

The reporter later found himself prevented from entering the White House by secret service agents:

I’ve just been denied entrance to the WH. Secret Service just informed me I cannot enter the WH grounds for my 8pm hit

Following the incident, White House press secretary Sarah Sanders put out a statement on Twitter. She claimed Acosta had been banned for “placing his hands on a young woman just trying to do her job as a White House intern”. But as footage of the incident showed, this is not what happened. And Acosta responded swiftly and bluntly to this very poisonous accusation:

This is a lie. https://t.co/FastFfWych

Other Twitter users were also quick to point out the holes in the White House version of events:

We can all see the (non-CNN) footage. Acosta didn’t lay his hands on anyone, and Trump refused to answer questions and hurled abuse. The fake news is coming directly from you.

Everyone saw what happened. A civilized government does not physically grab a microphone from a reporter, call him a “terrible person” and ban him from the press room! If Trump can’t handle tough questions, he is not fit to be POTUS.

Even if Acosta had ‘placed his hands’ on the young woman, several Twitter users were quick to highlight the hypocrisy of the Trump administration taking the moral high ground on this issue:

Then explain why Trump praised Greg Gianforte for body slamming Ben Jacobs: "Any guy that can do a body slam, he's my kind of guy." pic.twitter.com/hqlsIUbe7n

And lest we forget (we weren’t going to forget), Trump has quite a record when it comes to ‘placing hands’ on women:

Let's not forget, the @PressSec who now accuses @Acosta of "putting his hands on a woman" after he gently deflected her attempt to snatch a mic from his hands is the spokesperson of a man known for saying "Grab ’em by the pussy. You can do anything," https://t.co/3BdzmG9Ahv

Did he grab her by the pussy, or move on her like a BITCH? B/c thats totally acceptible behavior for President Trump. He set the precedent for interacting with women. Can please address this for us, Sara, you soulless fucking troll of a human? #MAGA ??

Perhaps because the footage of the incident clearly shows Acosta did not place hands on the woman, the White House press machine went on the offensive, releasing a different version of the footage. Once again, though, Twitter users – many of whom apparently have eyes and ears – were quick to contradict the ‘official’ take on the story:

White house press video versus NBC footage. It certainly does look like they've doctored it to make it look more violent. I also like how the White house one is gloomier colours to make it more sinister. pic.twitter.com/WHtufgxejK

One experienced video editor tweeted a breakdown of the changes made to the footage:

1) Took @PressSec Sarah Sanders' video of briefing
2) Tinted red and made transparent over CSPAN video
3) Red motion is when they doctored video speed
4) Sped up to make Jim Acosta's motion look like a chop
5) I've edited video for 15+ years
6) The White House doctored it pic.twitter.com/q6arkYSx0V

But the lengths the Trump administration will go to smearing reporters asking questions it doesn’t like is extremely sinister. What’s worse, it appears that Sanders called in the far-right conspiracy theorist cavalry to help in this crusade. The Independent noted:

It’s not news that Trump will go to great lengths to avoid difficult questions from journalists. Because in the same press conference, Trump accused reporter Yamiche Alcindor of asking a ‘racist‘ question when she asked him about his decision to call himself a “nationalist”:

And he told American Urban Radio Networks‘ April Ryan repeatedly to “sit down” – ironically as she was asking questions about voter suppression. He’s also made noise about reviewing NBC‘s licence, accusing it of spreading “fake news”.

On the plus side, the National Association of Hispanic Journalists swiftly put out its backing for Acosta:

By harassing @Acosta for simply doing his job & deeming him as the 'enemy of the people', President Trump is engaging in a calculated effort of putting a target on this journalist’s back.#PressFreedom #MoreLatinosInNewshttps://t.co/AlpICrlRco pic.twitter.com/uKgT2t1ktD

And the White House Correspondents’ Association put out an angry statement on the unacceptable use of the US secret service to silence journalists for asking tricky questions:

As The Canary knows all too well, the backing of unions and press associations can be a vital, make-or-break element in keeping a media that is free, fair, and able to speak out.

Sanders can insist that Trump “believes in a free press and expects and welcomes tough questions of him and his Administration” until she’s blue in the face. But pretty much anyone can clearly see the contempt with which he views journalists and reporters who disagree with him. He also can’t credibly say that he is concerned for the safety of women, or take any kind of moral high ground over men ‘placing hands’ on women. And that makes it even more sickening that a woman – Sanders – continues to stand up for him.

Journalists in the US are currently fighting the rising tide of fake news, misinformation, and propaganda – most of which comes from Trump supporters. And the attack on Acosta is just one more incident in a long line of cynical, self-serving publicity stunts from a presidency that is rotten to its core.

– Independent journalism needs your help. Please support The Canary if you appreciate the work we do.