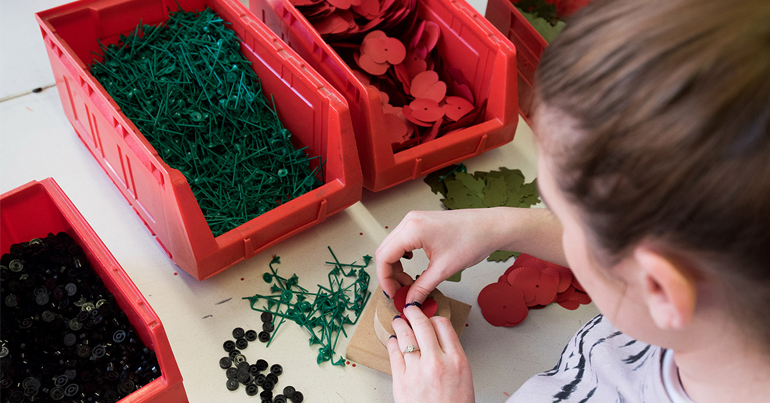 A new report exposes the Royal British Legion and Poppyscotland for using prison labour to produce remembrance poppies. In one year, a prison in England was responsible for nearly £100,000 of work with these two companies. At the same time, the prison was also part of a major contract supplying the UK’s military.

In its report Poppies, Prison Labour and the War Machine, anti-capitalist research group Corporate Watch exposes the ‘intimate connection’ between prisons and the UK’s armed forces. The report points to a PDF from One3one Solutions showing two contracts worth a total of £96,583 with HMP Ford in West Sussex. One3one Solutions, part of the prison service, uses inmates to take up work for both the private and public sector.

The figures from 2015/16 show that the Royal British Legion Poppy Factory and Poppyscotland’s Lady Haig Poppy Factory both have “general assembly and packaging” contracts with HMP Ford. The former is worth £79,562; the latter is worth £17,021.

The PDF mentions only the cost. But a spokesperson for the Legion told the Independent:

We have a commercial arrangement with HMP Ford who produce the black centre button and green stems of our poppies through injection moulding machines operated by prison staff. The prisoners take the stencils apart when they come out of the machines and package the individual pieces.

As with our parent charity, the Royal British Legion, we source a quantity of plastic components which are used in the manufacture of Scottish poppies from HMP Ford. It must be stressed, however, that we use multiple suppliers for the various different materials which go into poppy and wreath production.

Corporate Watch suggests using prison labour in the poppy supply chain amounts to hypocrisy. It quotes the Legion’s own statistic that about 3.5% of total prisoners, or 2,820 inmates, are veterans. And Veterans for Peace, run by ex-forces personnel, says the reason for this is war itself:

A veteran may return bodily from conflict, but his head often remains in the war zone. … There is growing evidence to show that many of the veterans who find themselves in the prison system are suffering from PTSD, or other combat related mental trauma.

One3one Solutions operates an ongoing contract for inmates to become part of the military supply chain. The Ministry of Defence (MoD) and One3one Solutions announced Project Claustrum in 2014. A press release at the time said it “enables prisoner workshops to produce non-ballistic supplies” for the MoD.

Such supplies include sand bags, camouflage nets, toolkit and jack repairs. It also includes Demountable Rack Offload and Pickup Systems, which are combat-ready vehicles used to carry ammunition and large guns. More than 1,000 inmates across the prison estate are involved with this work. An MoD article mentions fibreoptic repair kits, as well as tool kits for the Typhoon combat aircraft, are made at HMP Ford.

works with the Scottish Prison Service to produce a small emergency contingency stock to supplement the annual 5 million order target… This contingency stock fluctuates in size according to demand and is used only to meet unexpected last-minute orders during the Scottish Poppy Appeal period. This method is used to avoid the need to hire and then very quickly have to let go of Lady Haig’s Poppy Factory staff to meet limited and short-term increases in production requirements.

In this case, prison labour appears to be an alternative to zero-hour contracts.

Corporate Watch criticises all prison labour. It says inmates make less than £10 for a full working week while having:

no rights to organise, no contracts, no pensions, no right to choose what they do, and if they do not work they can be punished.

The group also says such exploitation of inmates increases the state’s repressive strengths both at home and across the world. But speaking to the Independent, a Legion spokesperson said the contracts:

provide work opportunities for prisoners. We believe this is a good opportunity to support the prisoners in their rehabilitation and it is not a route to cut labour costs.

And a Lady Haig Poppy Factory spokesperson told The Canary:

Prisoners who make the contingency poppies volunteer for the task. We believe that this is a worthwhile activity that will help prisoners to make a valuable contribution to society and also help them in their rehabilitation back into society at the end of their sentences.

The Canary asked One3one for comment but received no response by the time of publication. But, in its prospectus for clients, One3one Solutions says:

Though, as the Incarcerated Workers Organising Committee points out, prisoners that refuse to work are severely punished. Penalties include having visits or time outside of cells taken away.

There’s a harmful relationship between the prison and military-industrial complexes. Veterans wind up in prison as a result of war, while prison strong-arms inmates into supporting those same conflicts. Some of these inmates may be making tools for weapons of war one day, and parts for the symbol of “Remembrance and hope” the next. There is an ironic tension in this ‘rehabilitation’.

Despite the Legion saying the poppy is not “a sign of support for war”, Poppies, Prison Labour and the War Machine suggests that’s exactly what it is. Meanwhile, some people still promote the red poppy as a symbol of national pride. But the only thing it symbolises is working class exploitation from beginning to end.

– There are alternative poppies available: white, for remembering all victims of war and not just soldiers; purple, for animals that died in warfare. Or don’t wear one at all.

– Check out the Incarcerated Workers Organising Committee, a branch of the Industrial Workers of the World.

– Listen to The Lockdown podcast’s episode about the prison industrial complex.

– Read more from The Canary about the arms trade and prison abolition.