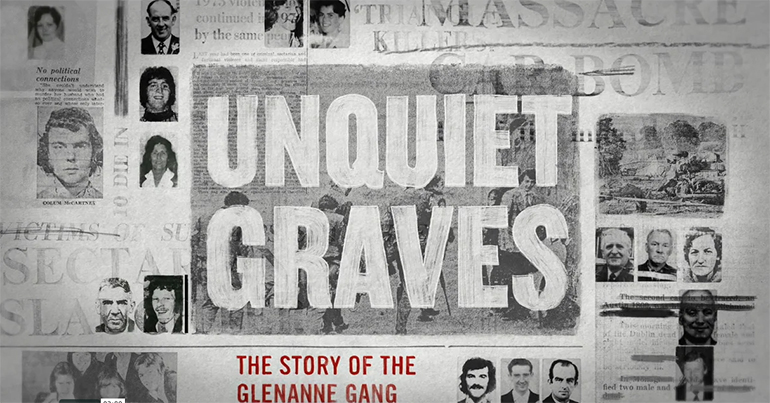 Correction: This article was updated at 12.30pm on 12 November to make clear that it was Alan Brecknell’s uncle and aunt who were shot and seriously wounded. The article previously incorrectly stated that it was his brother and sister-in-law.

Seán Murray is releasing a new documentary film named Unquiet Graves. It exposes collusion between the British state and loyalist death squads in the early 1970s in Ireland. In particular, Murray’s documentary focuses on the Glenanne gang which colluded with the British state to murder innocent Irish Catholics.

The conflict in Ireland between 1968 and 1998 is euphemistically referred to as The Troubles. Commentators described it as a sectarian dispute between Catholics and Protestants. It was therefore seen as a local dispute involving only the Irish. The British were just honest brokers and tried to make peace between these two tribes.

That mythical description is put to bed in Unquiet Graves. The documentary sets about uncovering the dangerous and one-sided role played by the British state in the Irish conflict. Murray says his film offers:

a contextual appreciation of these tragic events from the perspectives of the families.

He told The Canary he:

hopes to both create awareness around legacy issues as well as galvanise international support in creating pressure on the British government, who continue to impede all attempts at seeking the truth for families applying pressure

Murray’s film explores the gang’s killings in counties Armagh and Tyrone in an area known as the “murder triangle”. The gang was made up of members of the RUC, a former police force in Northern Ireland; the UDR, a British Army regiment; and the UVF, a loyalist paramilitary group. It was centrally involved in the murder of over 120 innocent civilians between July 1972 and the end of 1978. The group also took its murderous campaign south of the border.

Murray’s film opens and closes with references to Nobel laureate Seamus Heaney. Heaney’s cousin, Colum McCartney, is gunned down with a friend in the opening scene after they returned from a football match in Dublin. Heaney closes the film with a melancholic tribute to his cousin.

This tone continues as one contributor laments that, while everybody knew who was responsible:

not a single one has been…made amenable to justice.

We meet the mothers, fathers, and siblings left behind and left shattered by the Glenanne gang. The gang took life without warning and murdered innocent people. And, according to the documentary’s contributors, it appeared as if they had the full protection of the British state.

A case worker with the Pat Finucane Centre (PFC) Alan Brecknell, talks about his father Trevor. Originally Church of England from Birmingham, he converted to Catholicism. And not only would this change of faith cost him his job at the Protestant-dominated Rolls Royce factory in Belfast, it would cost him his life. After the family was forced out of Belfast, they headed into the gang’s lair in south Armagh. But this move was short-lived.

Soon after moving, and while out celebrating the birth of his child in a local bar, the gang gunned down Brecknell’s father as well as another man called Patsy Donnelly. They shot and seriously wounded Alan’s aunt and uncle. They also killed 14-year-old Michael Donnelly with a bomb. Michael’s family owned the bar.

Another victim on another night was Pat Campbell. They took his life in an attack on his family home. Weeks later in the middle of the night, police officers took his wife Margaret to Belfast. They took her to a police station that was miles away from her family home to identify one of her husband’s possible killers. After collapsing from the stress of that event, Margaret identified Robin Jackson. She recalls everything, in front of camera, and in frightening detail, clearly reliving every moment of that awful night as she speaks.

Police involvement and reaction to loyalists

For a long time after these killings, the families of the victims had nowhere to go. The police had never asked them for their story and the “RUC had a 100% failure rate” in convictions. But slowly people began to talk, and two local priests, Fr. Denis Faul and Fr. Raymond Murray, began making enquiries.

The PFC then obtained declassified documents from the Ministry of Defence, the Prime Minister’s Office and the secretary of state. Through a pictorial chart, the documentary displays the guns stolen from RUC and UDR bases by the gang. One of these guns, a 9mm sterling submachine gun, was responsible for 11 deaths including Trevor Brecknell.

And it appears the justice system had little sympathy either. While charging loyalist killers with an attack on a Catholic bar, one lord chief justice described them as “trying to rid the land of pestilence”.

Staring into the abyss

But it’s John Weir, a former RUC sergeant, who relays one of the most chilling tales of the documentary. He tells of a plan, apparently coming from British military intelligence, to “shoot up a school” in a town land called Belleeks. This was to be a revenge attack for an IRA attack at Kingsmill where they slaughtered ten protestant workmen.

When pressed on what “shoot up” meant, Weir said it meant shooting school children and teachers. But loyalists backed away form that plan fearing a “shocking retaliation from the republican side”. This would have led, according to Weir, to “a proper civil war situation”. But despite Weir’s admission, there was no police investigation of his claim.

Journalist Anne Cadwallader also features in the documentary. She tries to understand the thinking behind the gang and the reason behind killing innocent people. Cadwallader explains that it came from Frank Kitson’s counter insurgency manual. Kitson was a “counterinsurgency theorist” and a commander in Belfast in the early 1970s. His theories come from the notion:

if you can’t catch the fish either by rod or by net, then poison the water.

They targeted ordinary people in a deliberate attempt to persuade others to “repudiate the IRA”. As well as being immoral, Kitson’s approach failed. And unfortunately for ordinary people, it would continue to fail for at least another 20 years.

Response to the film

The scale of collusion between the British government and loyalists became apparent following the work of human rights groups like the PFC and Justice for the Forgotten (JFF). The publication of Anne Cadwallader’s book Lethal Allies revealed “the highest in the land knew of the collusion”. These lay the groundwork for Murray’s film.

Some sections within unionism have dismissed the film as “republican propaganda”. But then members of the Glenanne gang predominantly came from that community. So it’s the response from the Police Service of Northern Ireland (PSNI) that affects the victims’ families most in their search for justice.

Murray believes there’s a collective sense of empowerment and a resolve that Unquiet Graves should be another step in the campaign for justice. He believes a number of films have lead to an international response to injustices around the world. Films such as:

He claims these films:

brought the stories to a worldwide audience and further pressurised governments complicit or guilty in wholesale murder and genocide.

There’s still a long way to go for the families. But this film is another crucial step on that journey.

– Find out more about this documentary here. The film is being shown at selected theatres with regular updates on screenings posted here.

– Find out more about the Pat Finucane Centre and its quest to get justice for the families of the victims of British state killing. The advocate a non-violent resolution of the conflict in Ireland.

– Read Anne Cadwallader’s book Lethal Allies which first brought to light the dark side of British policy in Ireland and collusion between the state and loyalist paramilitaries.