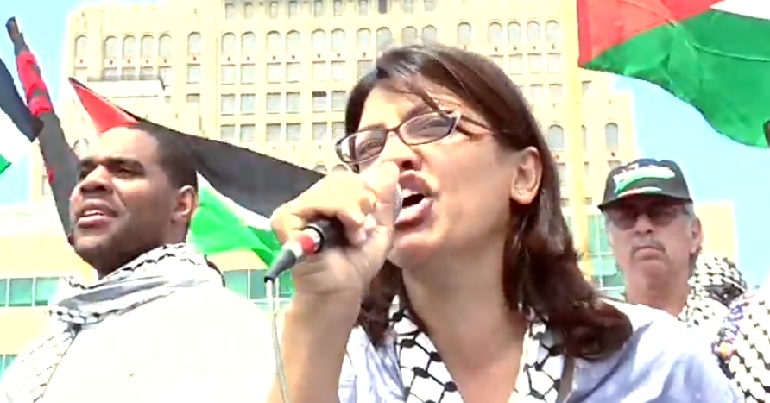 In the US mid-term elections on 6 November, Rashida Tlaib became the first Palestinian-American woman ever to enter the US House of Representatives. And her historic victory has given a massive boost to pro-Palestinian politics in Washington; because she has consistently spoken out against the ongoing Israeli occupation of Palestine.

A clear stand against injustice

In 2014, for example, Tlaib spoke out at a Palestinian march as the Israeli army massacred around 1,483 civilians in the open-air prison of occupied Gaza. She stressed:

We are against the illegal occupation of our Palestinian brothers and sisters.

Our children should never, ever be part of this kind of massacre.

Since 2000, Israeli armed forces or settlers have reportedly killed over 2,000 Palestinian children. And in the last seven months, Israel has killed an average of one child per week.

US military aid to Israel

Tlaib has received criticism more recently in pro-Palestinian circles for the support she received from J Street – a liberal Israel lobby group. The group’s political action committee said she supported “negotiations to reach a two-state solution” and “all current aid to Israel and the Palestinian Authority, particularly to fund initiatives that ‘foster peace, as well as economic and humanitarian services’”.

The suggestion of support for “all current aid” was particularly controversial. Because Israel – which reportedly has “the most technologically advanced military on Earth” – receives a massive amount of military aid from the US in spite of its alleged war crimes and “ethnic cleansing” in occupied Palestine.

In an interview this August, however, Channel 4‘s Krishnan Guru-Murthy asked Tlaib if she would “vote against US military aid for Israel”. And she answered “absolutely”.

She also insisted in a separate interview that:

Americans should not be aiding any country that doesn’t support human rights. I’ve been very clear. I will not support racist countries that pick and choose who gets access to justice.

And she soon lost J Street’s support for opposing the two-state solution and the current Israeli government’s “apartheid policies”, stressing:

It has to be one state. Separate but equal does not work… This whole idea of a two-state solution, it doesn’t work… Equality isn’t based on faith.

Palestine now has a voice in Congress

Tlaib is clearly a person who wants to see justice and peace for both Palestinians and Israelis. And as long as she continues to stand up against the Israeli government’s system of apartheid, occupation, and civilian massacres, Palestine has another much-needed voice of support in Congress.