Washington takes aim at a new 'Axis of Evil', but the world isn't buying it - Canary 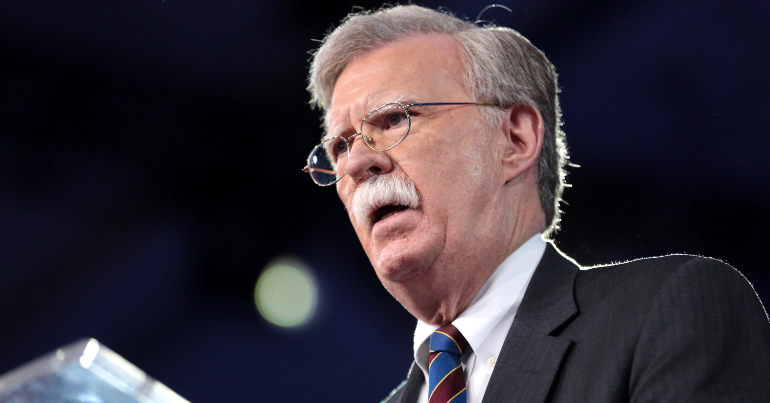 US national security advisor John Bolton has just promised a tough new line against the Trump administration’s enemies in Latin America. But Washington’s own record in the region shows the brazen hypocrisy of singling out these countries for criticism. So the world is unlikely to buy Washington’s latest offensive.

On 1 November, Bolton announced that the US will be imposing a new round of sanctions against Cuba, Venezuela and Nicaragua. He described the three countries as Latin America’s “Troika of Tyranny”. He argued:

This Troika of Tyranny, this triangle of terror stretching from Havana to Caracas to Managua, is the cause of immense human suffering, the impetus of enormous regional instability… Under President Trump, the United States is taking direct action against all three regimes…

Bolton said the US will be severing diplomatic ties with the three nations. This will largely overturn the normalization of relations with Cuba enacted by former US president Barack Obama. It will also worsen even further the diplomatic breakdowns with Venezuela and Nicaragua.

Bolton said this US strategy will continue until the countries meet various US demands, including freedom of speech, free elections, releasing political prisoners, and free association of political parties.

A strategy that the world opposes, but Miami loves

Bolton’s speech coincided with the UN’s 27th annual vote to condemn the devastating US economic embargo against Cuba. The UN General Assembly, where all 193 member nations have equal representation, voted 189 in favor. Two opposed the condemnation, and two abstained. Unsurprisingly, the US and Israel cast the two “no” votes.

Bolton delivered the speech at the Freedom Tower in Miami. This building was where many Cuban emigrants were processed after fleeing the country’s revolution in the late 1950s. The city, meanwhile, is home to many Cuban, Venezuelan and Nicaraguan exiles. And many (though not all) members of these communities support an aggressive US stance against the governments of their respective countries.

Together, these people form an important base of electoral support for the Republican Party in a crucial swing state. Indeed, the obvious purpose of the speech was to court votes from these communities for the upcoming mid-term elections.

US hypocrisy, however, is crystal clear.

Bolton’s words came just as Donald Trump announced plans to send around 15,000 US troops to the Mexican border to confront the ‘migrant caravan‘ of refugees fleeing from Honduras and other Central American nations ravaged by many decades of US intervention. And in terms of free elections, freedom for all political parties, and respect for human rights, the US is in no position to cast judgement on Cuba, Venezuela, and Nicaragua. Because the most recent ‘election’ in US-allied Honduras was reportedly tainted by extensive fraud, violent voter intimidation, and electoral irregularities. Yet the US accepted the result without question.

The US also has a long record of supporting, propping up and even funding brutal, authoritarian dictatorships across Latin America. This includes support for the murderous Pinochet regime in Chile (1973-1990) and the Argentine military junta (1976 – 1983), both of which were responsible for widespread human rights abuses including state murder.

So whatever the current faults of Cuba, Venezuela and Nicaragua, the reality is that it is primarily (and overwhelmingly) the US that has been, to use Bolton’s words, “the cause of immense human suffering” and “the impetus of enormous regional instability”.

And the US support for far-right governments continues…

The US is also clearly willing to keep allying itself to governments with authoritarian tendencies. And that was confirmed during Bolton’s speech. Because he expressed enthusiasm at the prospect of working closely with the new far-right Brazilian president Jair Bolsonaro – a “like-minded” partner whose election was somehow a ‘positive sign for the future of the region’. Critics have described Bolsonaro as a “fascist”, in large part because he has expressed admiration for the country’s brutal military dictatorship of the 20th century and even indicated support for torture.

In short, the US is willing not just to support tyrannical and repressive governments so long as they support US strategic and economic interests; but any country that threatens these interests is singled out hypocritically for criticism, isolation, hostility, attacks, and even US-backed terrorism.

The idea that concern for human rights, rule of law, or freedom drives US foreign policy is patently absurd.

– Take part in one of the campaigns of Just Foreign Policy.

– Check out The Canary‘s Latin America coverage. If you appreciate our work, support us.