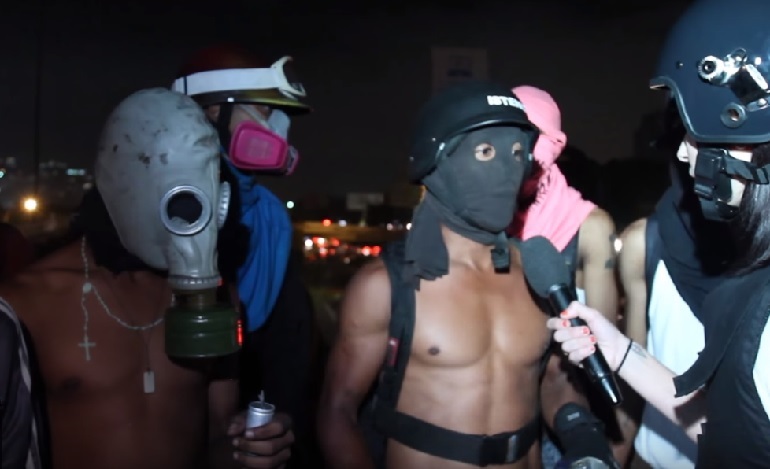 There’s one massive problem with the right-wing media’s desperate attempts to smear Jeremy Corbyn over the current political crisis in Venezuela. And one word in particular sums up the problem with their current mudslinging perfectly: hypocrisy.

The corporate media’s recent fake news about a supposed U-turn from Corbyn usefully distracted attention away from the very real U-turns of Theresa May’s Conservatives. And their coverage of Venezuela is very much the same.

As The Canary has reported previously, Venezuela is in the middle of a political crisis. And the US – which has sought to destabilise the government of the oil-rich country for many years – has been egging on the unrest. But far from exposing this interference, the world’s mainstream media has actually been echoing the anti-government line; so much so that critics have even called them out for spreading “propaganda”.

Media allegations have focused on the imprisonment of certain right-wing opposition leaders (who have close links to Washington and reportedly called for violent rebellion against Venezuela’s democratically elected government), supposed moves away from democracy (in spite of the most recent vote and previous praise for the country’s democratic system from renowned international figures), and the deaths that have resulted from ongoing fighting between opposing forces. The legitimate demands of the opposition, meanwhile, have focused on recent economic difficulties; which are mostly due to a global fall in oil prices and increasing political polarisation (encouraged by both the US and its affluent local allies).

There have been violent clashes in recent months between anti-government and pro-government forces (both citizens and authorities). And dozens of people have died on both sides. Government authorities have been responsible for at least five deaths so far. According to a recent poll, citizens overwhelmingly oppose the country’s violent protests, and any international intervention to remove President Nicolás Maduro.

Part of the blame for the current situation definitely lies with the ruling party and its past over-reliance on the oil industry. But media outlets rarely focus on the opposition. An opposition which has reportedly damaged public institutions (such as hospitals), attacked bystanders (sometimes burning people alive), and even accepted money to carry out violent attacks. And an opposition that critics suspect was behind attacks on the police.

Reporter Abby Martin, meanwhile, recently travelled to Venezuela to meet some of its opposition protesters. And what she found was very worrying:

At the same time, there’s little focus in the corporate media on Washington’s role in Venezuela. But as The Canary has previously reported, the US has long sought to destabilise the Venezuelan government by pushing large amounts of money into opposition hands.

Nor is there much balance regarding the West’s own crimes, or those of key Western allies. As the Trump Administration calls the Venezuelan government a dictatorship, for example, there’s little mention of:

Also, if protecting human life and dignity was so important to corporate media outlets (which, as they regularly prove, it isn’t), surely they would be putting more pressure on governments like Theresa May’s and Donald Trump’s to make even a percentage of the effort that Hollywood stars have made to support and protect refugees.

Where we should be looking…

Jeremy Corbyn’s Labour Party has put out a statement urging “everyone in Venezuela, on all sides, to end the bloodshed immediately”. Its message being, as UN Secretary-General Antonio Guterres has insisted, that “the only way forward is a political solution”.

But the US, which is at the very heart of Venezuela’s current crisis, has been seeking its own ‘solutions’. Why? Because Venezuela is only days away from the energy-guzzling US, and reportedly has the largest oil reserves in the world; along with a number of other natural resources. But in the last two decades, Venezuela’s ruling party has gone against the interests of US multinationals. And companies like ExxonMobil – the biggest oil corporation in the world – have lost international attempts to challenge these actions.

Now, former ExxonMobil CEO Rex Tillerson is the US Secretary of State. And he says the Trump regime is currently “evaluating all of our policy options as to what can we do to create a change of conditions where… Maduro decides he doesn’t have a future and wants to leave of his own accord”. On top of US sanctions which are set to worsen the situation in Venezuela, many critics see this statement as a regime change threat. And we all know what happens when the US does regime change (just think Iran, Chile, Iraq, or Libya).

Responsible journalists might look at global situations and assess them in context. But the motivation of today’s right-wing tabloids is apparently to protect the interests of the most powerful; using serious and complex issues as fodder to attack their opponents while ignoring facts that they can’t use for that purpose.

We all deserve so much better than that.