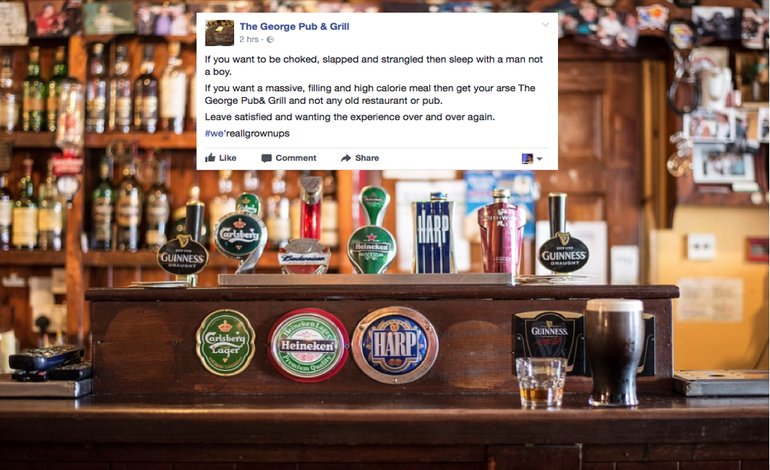 In the warped world of The George pub in Stockton, it appears that real men overeat and smack their wives about. The pub’s bizarre ad campaign has been slammed by the Advertising Standards Agency and domestic abuse charities, who agree the ad trivialises domestic violence.

It’s the second time the pub has come under scrutiny for its advertising methods. It was recently criticised by obesity prevention campaigners for offering free meals to anyone weighing over 25 stone.

But this time, The George tried to sell parmesan-covered pieces of deep-fried chicken (called ‘The Parmo’) with this advert:

The pub, which sells mostly steaks and burgers, also published a Facebook post telling customers: “If you want to be choked, slapped and strangled then sleep with a man not a boy.”

The chief executive of Harbour, a Teeside service for survivors of domestic abuse, said:

I don’t think it’s appropriate for domestic violence to be used in this way.

And the Advertising Standards Agency (ASA) agreed. After locals filed a complaint about the ad, the ASA upheld the complaint, stating:

Speaking to The Mirror, the pub’s owner Craig Harker didn’t seem to understand the issue:

The post was something that we took from Facebook. It was on all the banter pages, and said stuff like ‘would you punch your ex for a $1m’, stuff like that, so we changed it to parmo to localise it.

Allow us to explain

There is nothing funny about partner violence. According to the Office for National Statistics (ONS), an estimated 4.3 million women and 2.2 million men aged 16 to 59 have experienced domestic abuse since the age of 16. That’s around one in 12 of the adult population. So say Mr Harker’s pub holds 120 people on an average night, 10 of them could be survivors of intimate partner violence. There they are, sitting with their friends and enjoying their night. And suddenly, they spot the ad. The most terrifying, traumatic events of their life are reduced to a punchline to sell burgers. The idea of this happening to just one person invalidates any “it’s just a joke” argument. And that’s before we even touch on the impact of trivialising abuse in the minds of current and potential abusers.

Harker and his backers might want to dismiss these issues as the product of Joyless McBuzzKill bureaucrats. But according to Refuge, two British women a week are killed by a current or former male partner. Most grown ups agree that’s not something to laugh about.

– Support the work of Refuge and Harbour.

– If you are experiencing domestic abuse, the National Domestic Violence Freephone Helpline is open 24 hours on 0808 2000 247.