Jeremy Hunt tries to look good on Yemen. But it totally backfires. - Canary 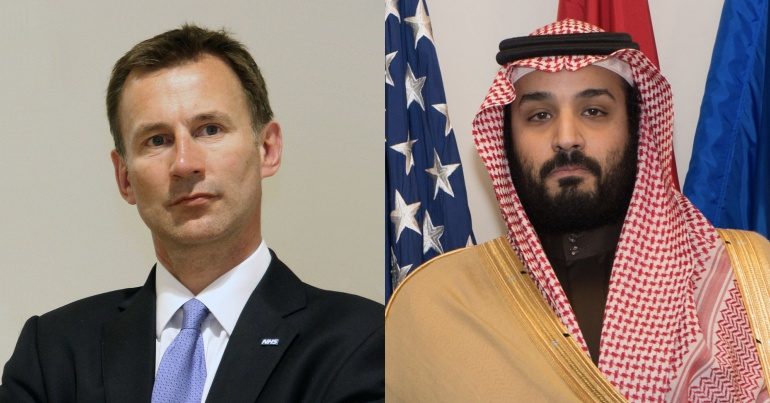 Foreign secretary Jeremy Hunt has been speaking about Yemen again. But nobody’s buying the government line. Because its awful record says everything.

Since 2015, the UK has sponsored Saudi Arabia’s bombing of Yemen with over £4.6bn worth of arms sales as well as political, technical, and logistical support. UK officials “have access to lists of targets” in Yemen, and are often in the Saudi command room when they’re picked out. At times, these targets are buses full of Yemeni children.

None of these facts, however, seem to stop Hunt pretending the UK government supports a peace process in Yemen. Because on 22 January, Hunt and his party tweeted that they were “committing £2.5 million in additional funding” to ‘support peace’ in the country:

OFFICIAL: We are committing £2.5 million in additional funding to support the @UN peace process in #Yemen.

Foreign Secretary @Jeremy_Hunt: "The strides made over recent weeks would not have been thought possible just a short time ago. But there is still a long way to go." pic.twitter.com/16JEaCp9m1

The Stockholm Agreements are our best chance of securing long term peace in Yemen – the world's worst humanitarian crisis. That is why I am announcing today that the UK will give £2.5m of new funding to the new UN Civilian Coordinator's Office in Yemen https://t.co/dTJ44mewDN

The truth is that UK government aid doesn’t even scratch the surface of the humanitarian crisis that it’s helping to sustain. But Hunt can get away with making these statements with such confidence because mainstream media outlets rarely highlight Britain’s key role (and Washington’s) in helping to destroy Yemen.

If the UK government really cared about “long term peace” in Yemen, though, it would end arms sales to Saudi Arabia immediately. In the words of CIA veteran and former Middle East adviser Bruce Riedel, “the Royal Saudi Air Force cannot operate without American & British support”.

Brazen hypocrisy – and everyone knows it

People were particularly quick to highlight his government’s brazen hypocrisy, and its complicity in Saudi terror:

We sell bombs to Saudi, who then bomb Yemen & then we go & give Yemen aid money. You do realise this is utterly ridiculous.

Make sure you keep selling the guns though. Got to pay for it after all. #hypocrites

Out of interest, how much profit has the UK made in the past few years selling arms to Saudi Arabia? 🤔💰💣🔫 #GTTO #JC4PM2019 #Yemen

Backing both war and peace, eh?

While Jeremy Hunt bemoans the dreadful humanitarian crisis in Yemen, the government carries on green lighting exports of mortars and guidance systems. https://t.co/JrTXBDOmyC

Hey warmongers,heres an idea, if you want to help Yemen then stop selling arms to the people bombing them. People before money #GTTO

The Conservative Party appears totally incapable of admitting – let alone ending – its support for the Saudi-led devastation of Yemen. Given the UK’s strategic and economic interests in Saudi Arabia, the Yemeni people are seemingly considered expendable.

This is not a government we can trust to defend human rights – even at home. Fortunately, it seems like most people see through its shameless attempts to convince us otherwise.