Fearing an election, Theresa May could bring in the Queen to overrule parliament - The Canary 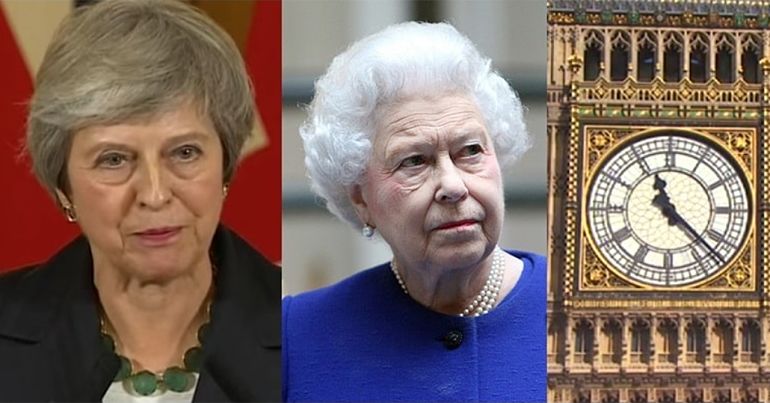 Theresa May is apparently ready to bring in the Queen to overrule parliamentary bills that would take fundamental power away from her embattled minority government. It appears the establishment and its Conservative party would rather tear up the UK constitution and fight over the chunks than face Jeremy Corbyn in a general election.

On one side of the battle, a “senior government minister” has confirmed that Theresa May could bring in the Queen to shutdown rebellions from her own MPs. The Queen could refuse to give opposition and rebel bills ‘Royal assent’ on the advice of ministers – assent is normally considered a formality. On the other side, Conservative backbench MP Dominic Grieve is trying to take power over the parliamentary timetable away from May’s government and hand it to a minority of MPs.

Ripping up the constitution

Both sides of the war have serious constitutional consequences. On one hand, the monarch would literally be overturning the vote of UK MPs. While senior royals have exercised their little-known power to veto new laws in recent years, the monarch has not withheld royal assent from a bill since 1707. Stephen Laws, who was the government’s top legislation lawyer from 2006-2012, said:

if the rules aren’t applied as they should be, that’s what will happen.

On the other hand, a minority of MPs would be undermining the basic principle of centuries of parliament: majority-rule. This is the outcome of Grieve’s amendment. It would allow 300 out of 650 MPs (a minority of 46%) to take control over the parliamentary timetable.

The lack of political pressure from the media and political establishment is enabling May to simply ignore the normal route out of the ongoing Brexit deadlock: a general election. Outlining the rationale (p 5) for bringing in the Queen, Laws said that the Commons has to pass a no-confidence vote to take leadership powers away from the government:

All the House can do is try to persuade the Government to initiate the required legal changes… If that fails, it can use what in practice in the current situation is the only sanction it has for enforcing its wishes: passing a motion of no confidence which could in due course lead to the removal of the Government from office.

Instead of triggering an election, Conservative party factions are plunging head-first into a civil war that could leave the UK constitution in tatters. And all because the party is too scared to face Corbyn at the polls – a man most of the British establishment has derided as ‘unelectable’.