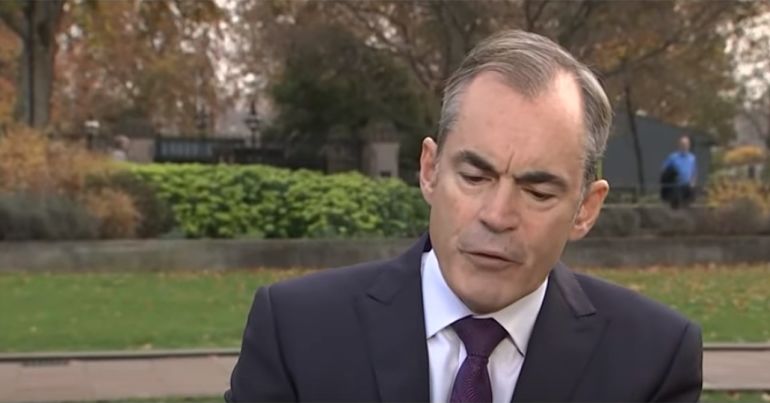 A gaffe from People’s Vote chair Roland Rudd may have sunk its Remain campaign. Rudd gave an interview to BBC Radio 4 from Davos – the annual meeting place of the global financial elite. This could be the final nail in the coffin for the campaign, which is trying to avoid accusations of elitism for wanting a referendum re-run.

The Today programme introduced Rudd with the following:

Roland Rudd [who] chairs the PR company Finsbury and is also chair of the so-called People’s Vote campaign is in our studio in Davos.

Obviously your sister is the Work & Pensions Secretary… Have you talked to her about it?

So Roland Rudd is in the same immediate family as one of the most high-profile members of the British establishment. And as Today noted, Rudd is also chair and founder of The Finsbury Group – a multi-million-pound consultancy company. Finsbury recorded gross profits of almost £30m in 2017 and lists Brexit as one of its top business risks.

Working class citizens, meanwhile, mainly carried the vote to Leave in 2016. Comprehensive academic analysis from Warwick university suggests that Brexit was a reaction to austerity and a vote of no confidence in the business oligarchs and the free-market system. With that in mind, the business elite calling for a second referendum from Davos is about the worst approach imaginable.

Leavers couldn't buy an asset like Roland Rudd. Thank goodness he donates his time to us voluntarily.

And others couldn’t believe the lack of self-awareness:

Dear @RolandRudd,
Who the f*ck put you in charge of the People's Vote campaign?
For a PR guy, you seem remarkably deaf to the fact that having a millionaire talking in support of a People's Vote, live from frigging Davros, ain't good PR.
Regards,
Tom

Chair of the People’s Vote campaign Roland Rudd argues his case to defeat Brexit from the BBC’s studio in …. Davos! Perfect symbolism if you want to reach the disaffected in the faraway towns …

“Roland Rudd joins us live from Davos”. Not massively helping the perception that @peoplesvote_uk is run by a bunch of elites.

It’s not just the executive of the People’s Vote campaign that looks out of touch. One prominent ‘life-long Labour supporter’ leaving the party over Brexit turned out to be a former journalist for Rupert Murdoch and editor of a luxury magazine for cruise holidays. Labour Lord, Andrew Adonis, meanwhile, has tweeted about overriding the Leave vote using skiing analogies from his holiday in Austria.

However, the People’s Vote campaign may be saved from ruining its goal of Remaining in the EU. The Labour leadership recently tabled an amendment that would – if other Brexit routes fail – enable MPs to indicate whether they support a second referendum. But Conservative rebels are unlikely to support the amendment. And the broader issue is that there isn’t actually much parliamentary support for overriding the Brexit result. Because the majority of constituencies, it’s estimated, voted Leave. Indeed, a number of ministers on Corbyn’s frontbench have said they’d resign if he supported another referendum.

The usual way out of parliamentary deadlock, meanwhile, is a general election. May publicly denies they’ll be another election until 2022. But Conservative cabinet secretary Mark Sedwill has ordered top civil servants to prepare for an electoral battle behind the scenes.

The People’s Vote campaign looks increasingly incapable of engaging with the working class citizens who voted Leave. In order to win any future referendum, the Remain campaign must lead with solutions to the root causes of the result: inequality and austerity. Phoning in from a high-profile elite conference in Davos is probably not the best approach.