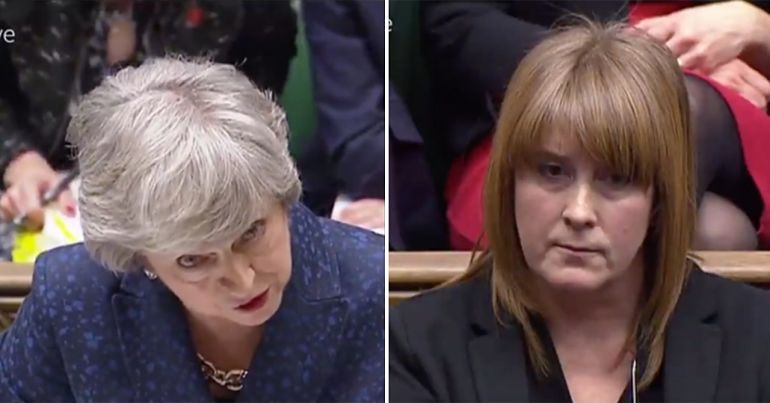 Labour MP Sarah Jones accused Theresa May of having “a stench of complacency” at Prime Minister’s Questions (PMQs) on 23 January. Jones questioned the PM over the delays in installing sprinklers and removing flammable cladding following the Grenfell Tower fire.

“A stench of complacency”

Jones reminded May of her promise after the fire that:

she would do whatever it takes to keep our people safe.

Describing Grenfell as “the tip of the iceberg” she described the situation now, 19 months later:

85% of the hundreds of blocks draped in exactly the same highly flammable cladding are still covered… Thousands of council and private buildings across the country don’t have sprinklers despite the fire services saying they are essential.

Jones also pointed out that:

the government doesn’t even collect data on the number of fires in tower blocks.

Before she really let rip on the government’s record and asked:

You can watch the question and May’s response in full here:

There is a "stench of complacency" about government's response to the Grenfell Tower fire, says Labour's Sarah Jones, raising concerns over delays in removing flammable cladding and installing sprinklers in tower blocks#PMQs updates: https://t.co/jdD2zc2vQe @LabourSJ pic.twitter.com/h1PL74TUGu

“All the compassion of reading out a shopping list”

May spluttered through her reply, losing her words on two occasions. Something that was noticed by social media users:

Powerful from Croydons Sarah Jones @LabourSJ
Wake of Grenfell you make commitments!
So many Tower Blocks with Grenfell style cladding have no sprinklers yet wasting Billions on No deal planning!
When will Prime minister keep her promise?
Stuttering reply so very telling!#pmqs

Theresa May couldn’t even provide an answer to the cladding question. Stuttered and stammered then said oh it’s down to the greedy unscrupulous people who put it up there in the first place to rectify it. That answer alone calls for a resignation after Grenfell #PMQs

Very passionate question re grenfell, answered with all the compassion of reading out a shopping list #PMQs

And as the union Unite put it:

Theresa May can't even prepare properly to answer questions on Grenfell and flammable cladding – relying on simply reading out a statement. How can we trust her to keep residents safe and take action? #PMQs

72 people died in the Grenfell fire. In October 2018, 16 months after the fire, 151 families had still not been rehoused. May has also faced criticism from the petitions committee after she turned down a petition from survivors. It stated that she:

failed to acknowledge that the petition had been started by bereaved families and survivors, or to express any concern for their suffering and loss.

May’s words at PMQs are not only a further insult to survivors but deeply worrying to all those who are living in potential deathtraps. It’s not OK. Empty promises and platitudes are not enough. People want, need and deserve better.