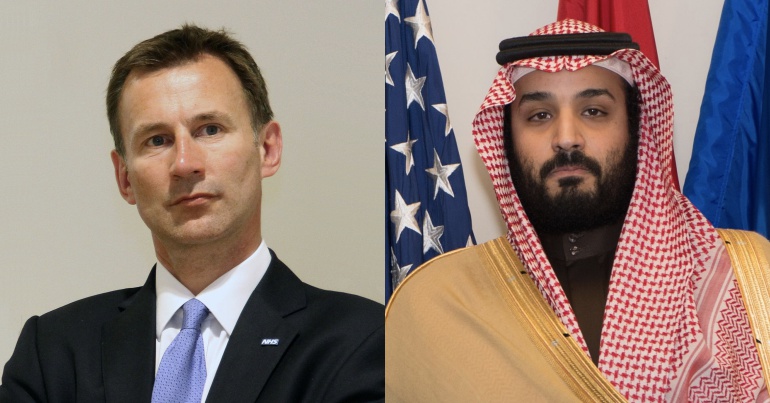 Saudi Arabia’s public prosecutor wants to execute five people known for their peaceful activism. One of the five is Israa al-Ghomgham – a long-standing human rights activist. She’s the first woman to face execution for defending human rights in the authoritarian Saudi Arabian regime.

International outrage is growing to prevent the executions. But so far, UK foreign secretary Jeremy Hunt seems to have remained silent on the matter. In fact, on 21 August, he even praised Britain’s “close” relationship with the Saudi regime. As the UK government continues to chase trade deals – including arms – with Saudi Arabia, meaningful action seems unlikely.

As Human Rights Watch reported, the activists have been detained for over two years without legal representation, on charges that “do not resemble recognizable crimes”. These include:

“participating in protests in the Qatif region,” “incitement to protest,” “chanting slogans hostile to the regime,” “attempting to inflame public opinion,” “filming protests and publishing on social media,” and “providing moral support to rioters”.

There are fears that al-Ghomgham’s execution in particular “sets a dangerous precedent for other women activists” imprisoned in Saudi Arabia. As Sarah Leah Whitson, Middle East director at Human Rights Watch, explained:

Any execution is appalling, but seeking the death penalty for activists like Israa al-Ghomgham, who are not even accused of violent behavior, is monstrous… Every day, the Saudi monarchy’s unrestrained despotism makes it harder for its public relations teams to spin the fairy tale of ‘reform’ to allies and international business.

This is especially pertinent because one of Saudi Arabia’s key business allies is the UK.

According to the Saudi British Joint Business Council (SBJBC) – which claims to work closely with both governments, Saudi Arabia is the “UK’s largest trading partner in the Middle East”. The SBJBC states that joint ventures between the two countries total £11.5bn, and that UK exports totalled £7.34bn in 2015.

Further post-Brexit deals with Saudi Arabia are also on the table. In March, the British government announced plans for a further £65bn “of trade and investment ties”.

But these deals are not all that they seem to be. Because Saudi Arabia is also the “UK’s biggest arms customer”. According to Campaign Against Arms Trade (CAAT), the UK has licenced £4.7bn arms exports in the past three years. And these arms have been used in a brutal Saudi-led war against Yemen; which is, according to the UN, the “worst humanitarian crisis” in the world.

On 9 August, a Saudi-led coalition bomb hit a school bus in Yemen, killing 40 children and 11 adults. Yet Hunt still defended the UK’s links to Saudi Arabia.

This was just the latest tragedy in a brutal war.

Since March 2015, a Saudi-led coalition has been fighting Houthi forces in Yemen and those loyal to former president Ali Abdullah Saleh. As CAAT reported:

The UK has continued to support Saudi air strikes in Yemen and provide arms despite overwhelming evidence of repeated breaches of international humanitarian law.

This is in clear violation of UK’s own guidelines on arms sales, and European and international law, and makes a mockery of the government’s claims to rigorously control arms export.

The Saudi dictatorship is a Western ally. Heavily linked to terrorism and the escalation of the war in Syria, Riyadh has also faced allegations of war crimes in Yemen. Despite denials by the Saudi foreign minister, a UN report in 2017 stated that:

Given that the UK is fully complicit in Yemen’s war, it seems unlikely that Hunt or the UK government will step in to prevent al-Ghomgham’s execution.

Blood on his hands

As The Canary previously reported, the situation for female activists in Saudi Arabia is already dangerous. In May, at least 11 prominent women’s rights defenders were arrested. These are people who’ve spent years fighting to end female discrimination, including the right for Saudi women to simply drive alone.

There are genuine concerns about the safety of activists throughout Saudi Arabia. And the plan to execute Al-Ghomgham also threatens thousands more women, since it makes their position even more vulnerable. It curtails female activism and so limits the human rights of Saudi women even further.

The UK’s ongoing relationship with Saudi Arabia already makes it complicit in Yemen’s genocide. And with Hunt as foreign secretary, this looks set to continue.

It really is a matter of life and death. But a change in government seems to be the only way we can truly cut Britain’s ties with the brutal Saudi regime.