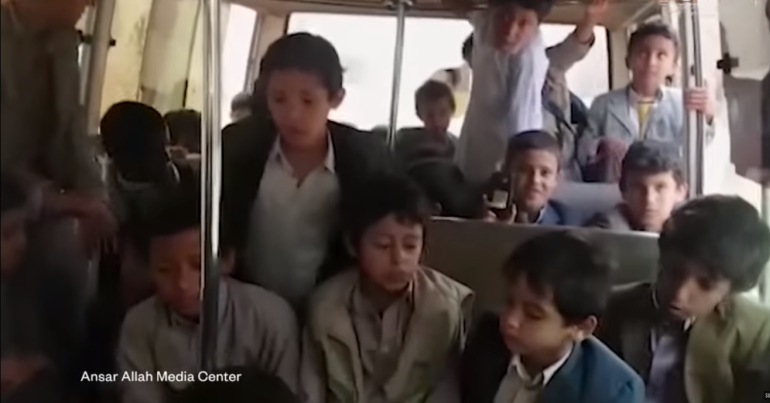 On 9 August, a Saudi-led coalition bomb hit a school bus in Yemen, killing 40 children and 11 adults. As CNN reported on 17 August, the bomb – a 500-pound laser-guided MK 82 bomb – came from US company Lockheed Martin.

Since the beginning of Saudi Arabia’s war on Yemen in 2015, the UK and the US have been assisting the Saudi-led coalition. The coalition then uses this assistance to target Yemeni civilians.

After a US-supplied bomb killed 97 people in a Yemeni market in 2016, former US President Barack Obama revoked the sales of “precision-guided military technology”. But in March 2017, President Donald Trump’s then-secretary of state Rex Tillerson reversed this ban.

Many on Twitter praised CNN’s coverage, which included a map of civilian massacres linked to US arms manufacturers:

Astonishing graphic from @CNN, identifying civilian massacres in Yemen with the bomb makers – Raytheon, Lockheed Martin and General Dynamics. This should be standard in war reporting. Searing images. https://t.co/EZqkSsAri6 pic.twitter.com/NWJvPuN7ct

The image shows that US-made bombs have killed at least 252 civilians in Yemen.

Just 54 hours before CNN’s revelation, Lockheed Martin requested “an amazing photo of one of our products”:

According to Amnesty International, military assistance to Saudi Arabia is sponsoring “horrific war crimes”. People in the UK and the US must say: “not in my name”.

– Read more of the Canary’s coverage of the crisis in Yemen.