This woman's liberators would scare the pants off Boris Johnson - Canary 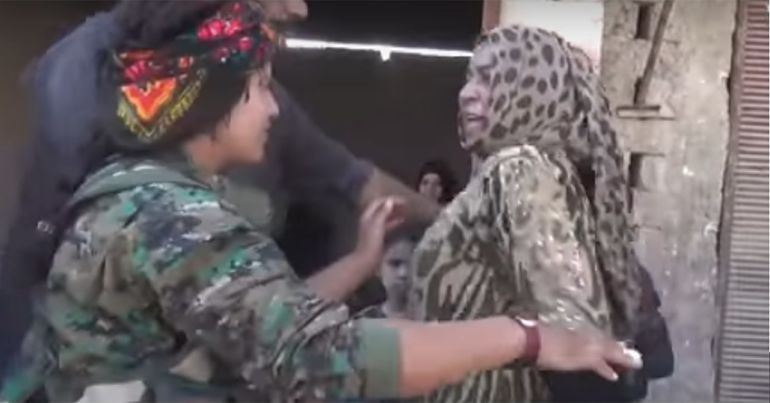 Former UK foreign secretary Boris Johnson is facing a possible inquiry into an article that compared women wearing burqas and niqabs with “letterboxes” and ‘bank robbers’. But this intervention by Johnson was all about internal Conservative politics and promoting his personal agenda.

Indeed, Leave.EU – which has close links with UKIP – is now officially backing Johnson and his fellow ultra-Brexiteer Jacob Rees-Mogg MP for Conservative leader:

Fed up of how this weak "conservative" government has handled Brexit?

A leadership contest is inevitable. Join the huge number of our members already flooding the Tory party, ready to elect a true Brexiteer.

Help put the spine back into the Tory party: https://t.co/Vgc33bXJWn pic.twitter.com/GUy1UWix07

But should Johnson wish to meet people who actually liberate women from fundamentalist oppression, he need look no further than the Kurdish-led women’s militia, the YPJ:

Commander Rojda Felat of the multi-ethnic Syrian Democratic Forces (SDF), which includes the YPJ and its male counterpart the YPG, makes clear its intentions:

People are joining the SDF and YPJ by the droves. Not only for the [Yazidi] women of Shengal, but wherever a woman is being suppressed, wherever a man is threatening a woman, our forces will struggle against this. Our struggle for the liberation of our people will become a beacon for all resisting peoples.

The first forces to respond to the calls of the trapped Yazidi refugees were the YPJ, the YPG and the PKK (Kurdistan Workers’ Party). Many of the rescued women went on to form the YBŞ (Shengal Resistance Units) and the Shengal Women’s Council.

Stateless democracy and the Kurdish revolution

At a 2014 summit, Kurdish activist Dilar Dirik talked about the idea and practice of stateless democracy and the Kurdish women’s movement:

The YPJ are not only feminists but practise democratic confederalism, a form of direct democracy based on the ideas of US anarchist Murray Bookchin.

According to the Kongreya Star women’s movement in the largely Kurdish-populated region of Rojava in northern Syria, democratic confederalism is:

At the 2016 Dublin Anarchist Bookfair, Ercan Ayboga – author of Revolution in Rojava – and US academic Janet Biehl talked about stateless democracy in Rojava, as well as the role of co-ops:

Meanwhile, the UK Conservative government continues to regard the YPJ and the YPG as terrorists, even though they’re still the main frontline group fighting Daesh. Yet the UK and the US essentially rely on the YPG/YPJ in the fight against Daesh and have provided them with strategic military support since late 2014.

Indeed, it was the YPG/YPJ and their allies who defeated Daesh in its de facto Syrian capital of Raqqa.

The antagonism of the UK government towards the YPG/YPJ is probably more about the radical ideas professed by those militias and the people of Rojava generally.

And perhaps that is why the Conservative government continues to arm the authoritarian government of Turkey’s Recep Tayyip Erdoğan, busy waging war on Rojava and committing war crimes.

Indeed, since 2016, the UK has sold Turkey over $1bn worth of weapons. And in May 2017, UK prime minister Theresa May and BAE Systems sealed a £100m contract to help Turkey develop fighter jets. Rolls Royce also partnered with Turkish firm Kale in 2017 to build the engines for its fighter jets.

And with regard to Muslim women’s dress codes, as Afroze Zaidi-Jivraj expressed so cogently in The Canary, this is entirely a matter for those women and not for disingenuous male politicians like Johnson.

– Read The Canary‘s previous articles on Turkey, Kurdistan and Rojava.