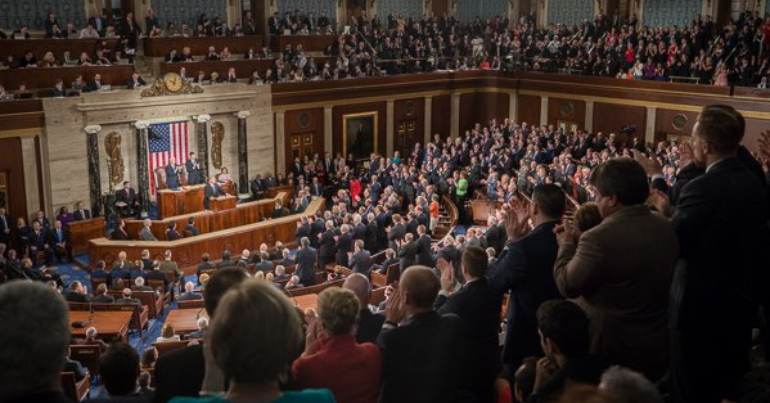 There’s clearly a leftward trend taking place in the US Democratic Party. Several candidates with proposals similar to those of Bernie Sanders, for example, are likely to enter Congress in the 2018 mid-term elections. This could mark the beginning of a significant pro-Palestinian voice in the US political system. And the pro-Israel lobby is already reacting harshly.

In June of this year, Alexandria Ocasio-Cortez shocked the US political system by beating Joe Crowley in a New York Democratic Party primary race. Many saw the victory of the openly democratic socialist Ocasio-Cortez over an establishment centrist as one of the biggest political upsets in recent US history.

As The Canary has reported, her proposals include universal healthcare, free higher education at public universities, and reform of the US banking system. Her triumph is part of a wider shift in the US towards many of these bread-and-butter social democratic domestic policies.

But Ocasio-Cortez’s entrance into Congress – almost certain given her district’s demographics – may also have a huge impact on the politics of the Middle East; because she will add a significant pro-Palestinian voice to an overwhelmingly pro-Israel political establishment. She has been unequivocal, for example, in condemning Israel’s occupation of the West Bank and the humanitarian crisis that it has created.

There are also other progressive Democrats who’ve beaten candidates from the party’s establishment ‘centrist’ wing. And these new faces of grassroots politics have been bold in their support for the Palestinian cause.

Ilhan Omar and Rashida Tlaib, for instance, won Democratic primaries in the midwestern states of Minnesota and Michigan respectively. Like Ocasio-Cortez, they are practically guaranteed to win in their strongly Democratic congressional districts. If so, they’ll be the first Muslim women ever to be elected to the federal Congress. And they’ve not held back in criticizing Israel or speaking up for the Palestinian people.

Tlaib, meanwhile, is herself of Palestinian origin. And she favors slashing US military aid to Israel. Speaking to Channel 4 recently, she said:

I will be using my position in Congress so that no country, not one, should be able to get aid from us… when they still promote that kind of injustice.

Ocasio-Cortez, Omar and Tlaib would join Sanders to form a small but passionate pro-Palestinian voice in Congress. Until now, almost all congress members of both major parties have taken a strongly pro-Israeli line with only a few exceptions. And unsurprisingly, these left-wingers’ positions have already met with strong hostility.

For example, Ocasio-Cortez’s mere use of the term “occupation” sparked a strong reaction from the usual quarters. And some responses have been outright patronizing. A Washington Examiner op-ed accused her of “parroting progressive buzzwords” and not having “a clue on the Israeli-Palestinian conflict.”

Omar, meanwhile, has come under heavy attack from the pro-Israel lobby for comments she made back in 2012. She said Israel had “hypnotized the world” to ignore its “evil doings.” She defended these comments on Twitter earlier this year.

Finally, Tlaib has faced criticism for coming out in favor of a one-state solution to the conflict; a position almost unheard of in mainstream US politics. In the view of pro-Israeli politicians and lobbyists in the US, this position conflicts with what they call Israel’s ‘right to exist’.

Perhaps inevitably, the usual suspects on the right have also been employing accusations of antisemitism.

On 20 August, the far-right Federalist website published an article called Democrats Are Fielding Even More Anti-Semitic Candidates For Congress. The author smears all three women above as vicious antisemites. And he invokes the ongoing media attacks on the UK Labour Party to try and back up his point. For him, this serves as a warning of what will become of the Democratic Party in the US.

The article focuses on the debate surrounding the International Holocaust Remembrance Alliance’s “working definition” of antisemitism. The most recent smear campaign against UK Labour leader Jeremy Corbyn focused largely on his party’s refusal to stifle criticism of Israel by including one of the IHRA’s controversial examples in full in its new code on fighting antisemitism.

Potential to shift the balance of power

These attacks, however, may not be able to stop this new bloc from radically altering the dynamics of how this issue plays out in the US. After all, the US is the main supporter of the current Israeli government’s far-right position. And if there’s even a slight break in the consensus within the US political system, it could dramatically shift the balance of power and provide an opening for change. It could even increase the possibility of an end to Israel’s ongoing occupation of Palestine, and a resolution to the entire conflict.