Austerity, complacency and irresponsible financing. How Northamptonshire County Council has fallen into a state of crisis. - Canary 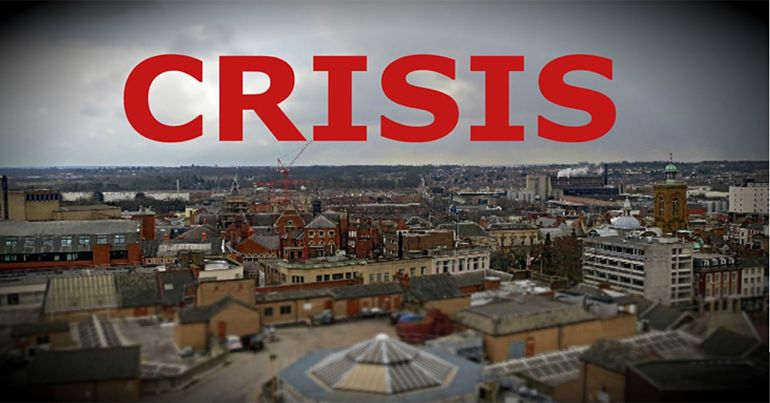 Northamptonshire County Council has fallen into a deep financial crisis. The council has subsequently voted to implement severe cuts to jobs and services to counteract a £70m budget shortfall, leaving residents furious. With local and central government passing the blame onto each other, just how did Northants council plunge itself into a £70m crisis?

A government inspection of the council’s finances found it was relying on unreliable and sporadic sources of income. These were predominantly one-off items, windfalls, and capital receipts. The inspector reported that this unreliable income, coupled with the council’s radical outsourcing plans, was the main cause of the problems.

In efforts to reduce spending and generate savings of £96.7m, Northants created an outsourcing plan for its services. This plan was called the “Next Generation Model“. The model sought to outsource services, creating new independent bodies which planned to take over health and social care services.

The plan was approved in 2015, but it failed to deliver on the £96.7m target. According to figures from the Guardian, overspending on children’s services and adult social care increased from £3m in 2014 to £32m in 2016-17. In 2018, the council took both the health and adult social care services back under its control.

The government released its Best Value Inspection in March 2018. This report investigated Northamptonshire County Council’s financial issues, blaming council leaders’ “weak budgetary control” for the deteriorating finances. The report heavily criticised the council’s finance department, highlighting its lack of structure. The report argued that, within the council, there “appears to be no one officer who has clear responsibility for setting professional standards for finance staff”.

When the council’s deteriorating finances were nearing breaking point, then finance director Matt Bowmer sent a warning to the council, highlighting issues with its “culture and behaviour where overspending is acceptable”. Bowmer contacted the council, outlining his intention to issue a section 114 notice, which bans a council from any new non-essential spending. However, the warning was “not taken seriously” by the council, according to government inspector Max Caller, and was subsequently ignored until a section 114 was ordered 28 months later.

The inspection team has been unable to find any record of more effective budgetary control following that correspondence. Services continued to overspend and failed to deliver planned savings in 2015/16

The council has issued two section 114 orders this year. Before this, UK councils had only issued two since 1988. The government report argues that if the section 114 had been issued in October 2015, “and the council had treated it as the wake-up call it needed to change its behaviour the road to stability and normality, though difficult, might have been possible”.

A recent audit into Northamptonshire council’s finances also revealed that councillors have been spending money on luxuries through a council-owned company called NEA properties. The company sold its properties in 2014, before dissolving and transferring £700,000 back to the council. However, £180,000 was spent on other items. This included a corporate hospitality box at Northampton Saints rugby club. It also included £4,000 spent on a B17 vintage aircraft and first aid staff for a memorial event in May 2015. NEA Properties even spent £2,700 on a “heritage dinner with string quartet”.

Council leader Heather Smith, who resigned in response to the government report, had complained that the council received “significantly less” government funding than other areas. In September 2017, she expressed concerns about how inadequate funding was affecting public services, stating:

They [the government] either want us to be able to provide local services or they don’t. We can’t carry on as we are

She then went on to launch an appeal for fairer funding from Westminster.

At the time of the appeal, the council’s population was 733,000 – among the fastest growing in England. The appeal argued that central government failed to account for population data when distributing funding. Northants claimed that if it received the same funding per head of population as East Sussex County Council, whose population is much smaller, it would receive an extra £115m a year, equating to an extra £159 per head. Despite this, the government report argued that Northamptonshire was “in no worse position than any other council” and was not the “most disadvantaged” shire / non-metropolitan county.

Shire counties face a triple whammy of funding reductions, rising demand for services and are the lowest-funded type of authority… Counties are shouldering a disproportionate burden and the elastic is close to breaking.

The future of Northamptonshire County Council

Northants council is already deliberating cuts to services. One of the most notable of these is the proposed closing of 21 Libraries. Furthermore, 19 of the 21 libraries host services including mother-and-baby groups and health visitor sessions. These services use libraries after previous cuts saw closures of Sure Start Centres.

The plans relating to the cuts reveal a host of spending reductions. Many pertain to highway services such as pothole filling, winter gritting, and traffic light maintenance. There are also plans to reduce funding to museums and heritage sites. It’s likely that the council will further address cuts to the largest areas of expenditure; adult social care and children’s services. The council has admitted it will be providing the legal minimum only to those in most need.

Both the council and the central government must share the blame for this crisis. Government council funding has reduced by nearly 50% since the coalition government took over in 2010. The government’s relentless austerity is depriving and starving councils of money and resources. This case is a prime example. However, despite being severely underfunded, the council did fail to manage its limited funds correctly. It chose to disregard warnings, spend lavishly, restrict the diversity of its income, and outsource services to private companies.

According to a report by the National Audit Office, there are 15 councils that could see the same problems in the next three years. The most likely councils are Tory-run Surrey, Somerset, Lancashire, and Norfolk. This should be a wake-up call to Westminster. Councils are collapsing and people are suffering. We need a change, and we need it fast.