After the Luciana Berger controversy, one devastating thread exposes why Labour needs to democratise fully now - The Canary 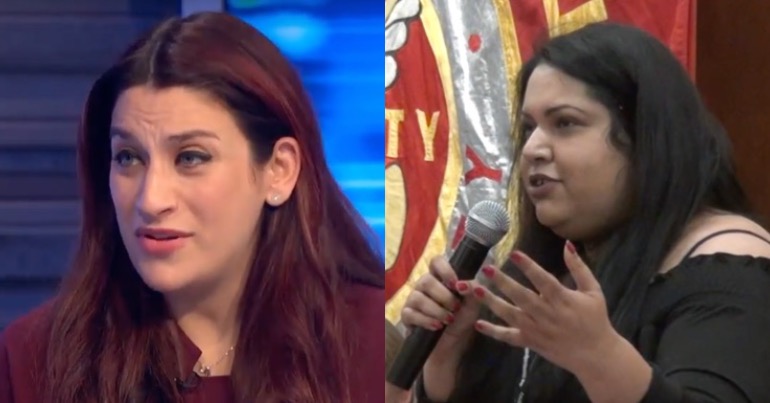 After the recent Luciana Berger no-confidence controversy, questions are again being raised over the quality of Labour’s ‘member-led‘ democracy.

And a devastating thread by a Haringey Labour councillor is scathing about the selective value of democracy in the party.

This issue emerged again after a controversy surrounding proposed motions of no-confidence in MP Luciana Berger by local Labour Party members in Liverpool Wavertree. According to members, they were holding Berger to account for “continually using the media to criticise” Jeremy Corbyn. And as the BBC reported, Labour’s shadow chancellor John McDonnell: “urged Ms Berger to publicly reject claims she supported a Labour “breakaway”, amid media speculation MPs disenchanted with Mr Corbyn’s leadership were planning to form a new party.”

Below is an example of Berger refusing to support the prospect of a Labour government:

Why didn't #Marr show Tom Watson this clip of Luciana Berger on LBC radio refusing to endorse a Corbyn-led Labour govt? Presumably because it would have put into context why @WavertreeCLP are so fed up with her, thus destroying the antisemitism narrative. pic.twitter.com/3Z26eIBG79

And while appearing on Peston, Berger seemed unwilling to rule out supporting a breakaway party to challenge Labour. She also spoke of the “lack of leadership that we’re seeing on all sides” – a not-so-veiled swipe at Corbyn:

However, despite this evidence, some media reports suggested that the no-confidence motions were motivated by Berger’s position on the Labour antisemitism controversy. Berger is Jewish and has criticised the party’s handling of the issue.

@UKLabour deputy leader Tom Watson makes impassioned defence of "friend and comrade" Liverpool Wavertree MP @lucianaberger, after her local party called for a vote of no confidence in her. She has criticised Jeremy Corbyn over anti-semitism and Brexit. pic.twitter.com/Gl7fAZfbha

Watson also called for the suspension of Wavertree Constituency Labour Party (CLP), as has Tony Blair. Labour’s general secretary Jennie Formby rejected this call. Wavertree CLP also rejected it, writing this response to the criticisms of Watson and others and describing “false accusations of bullying”: 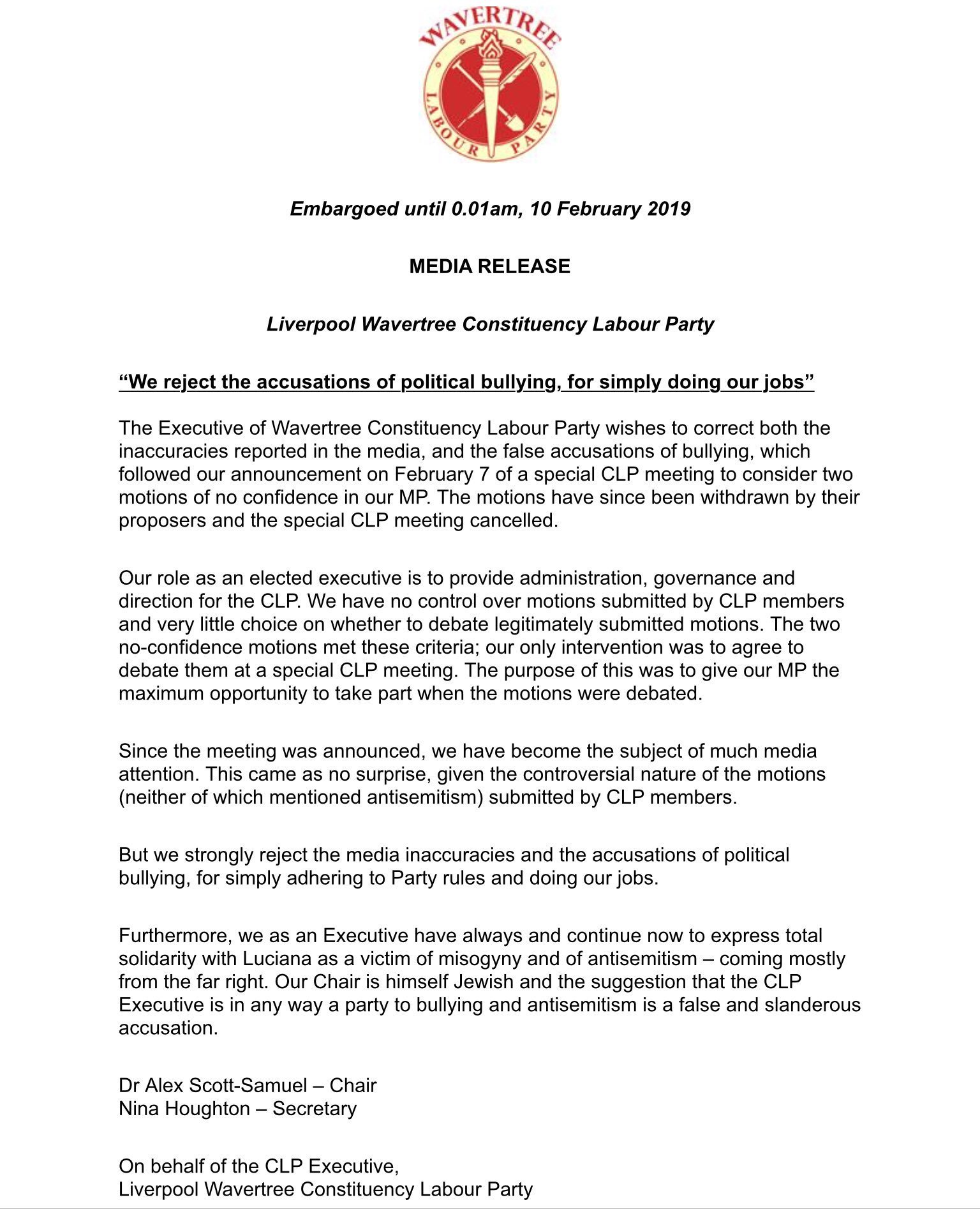 As the response states, the no-confidence motions were withdrawn after significant media pressure.

Labour councillor for Haringey West Green ward Seema Chandwani wrote the following thread on the above issues. And it truly speaks for itself: 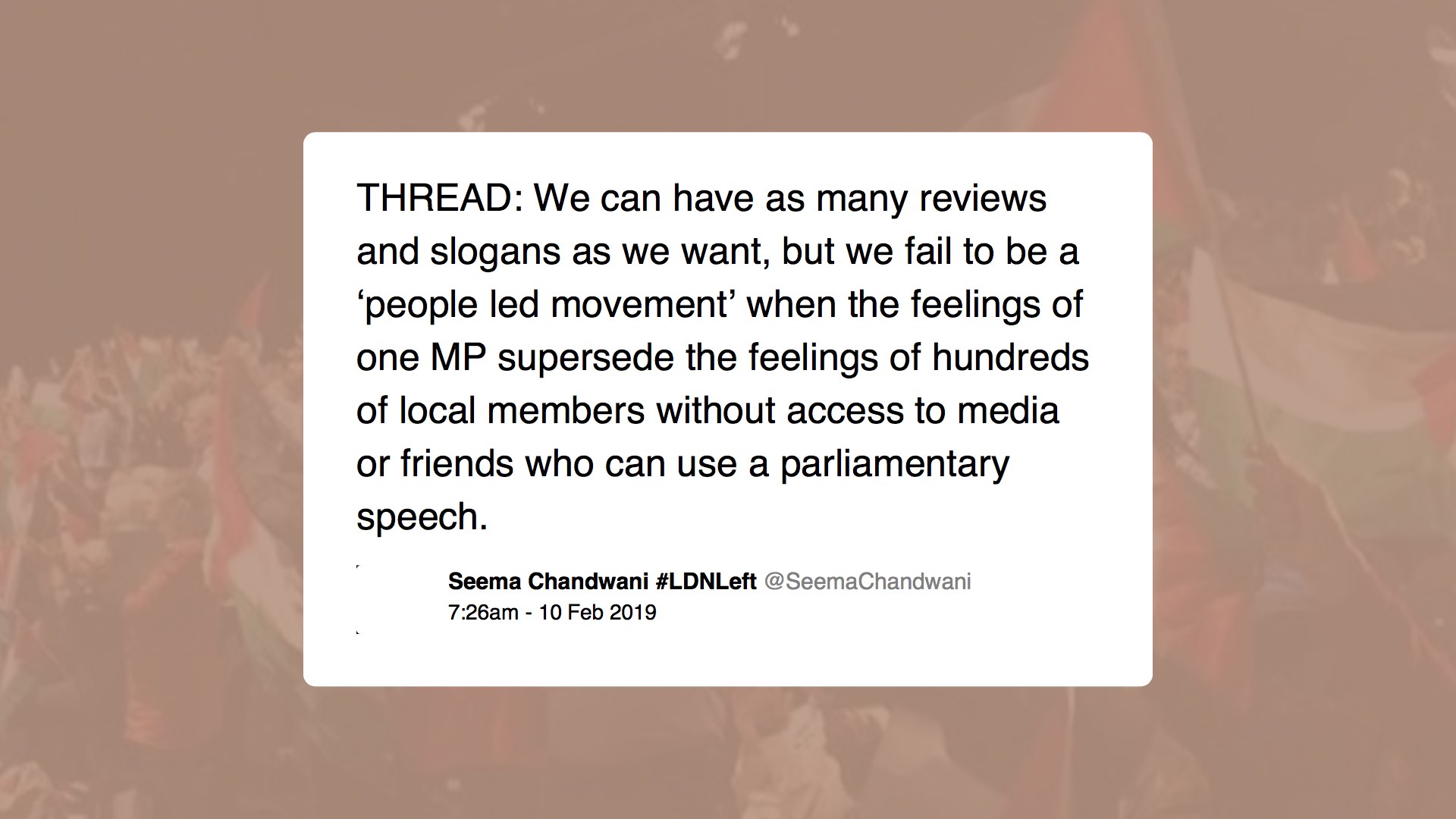 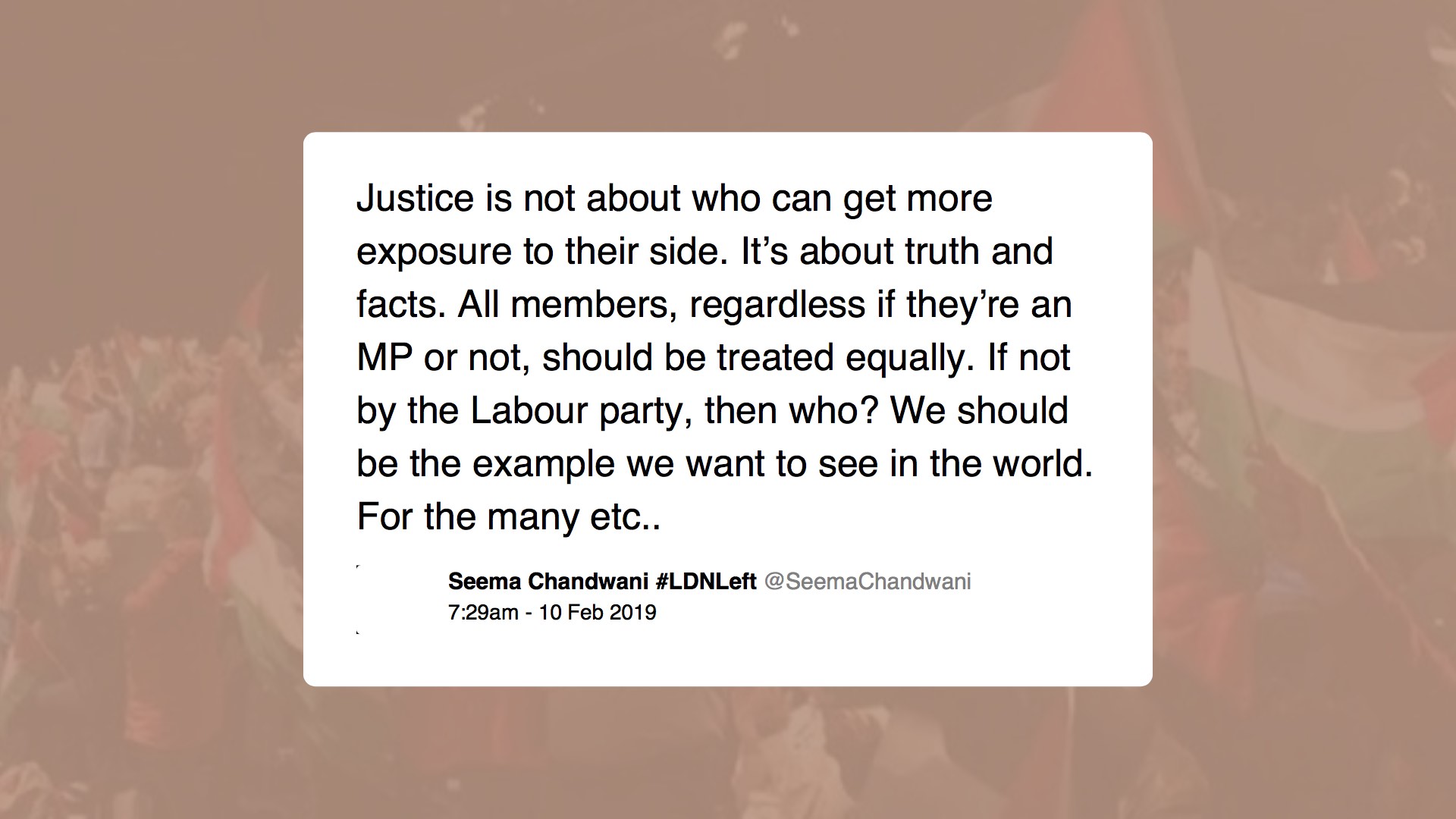 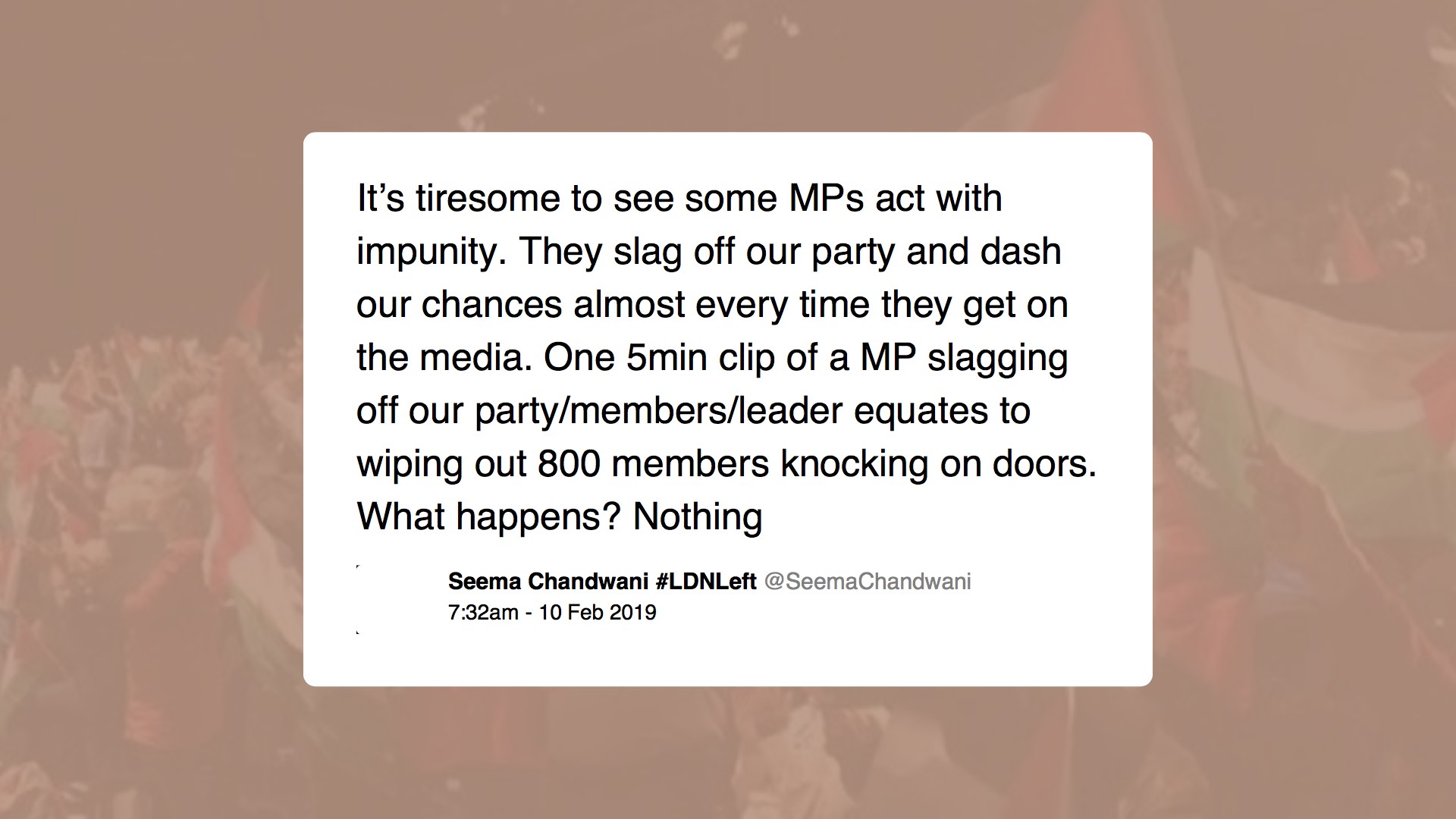 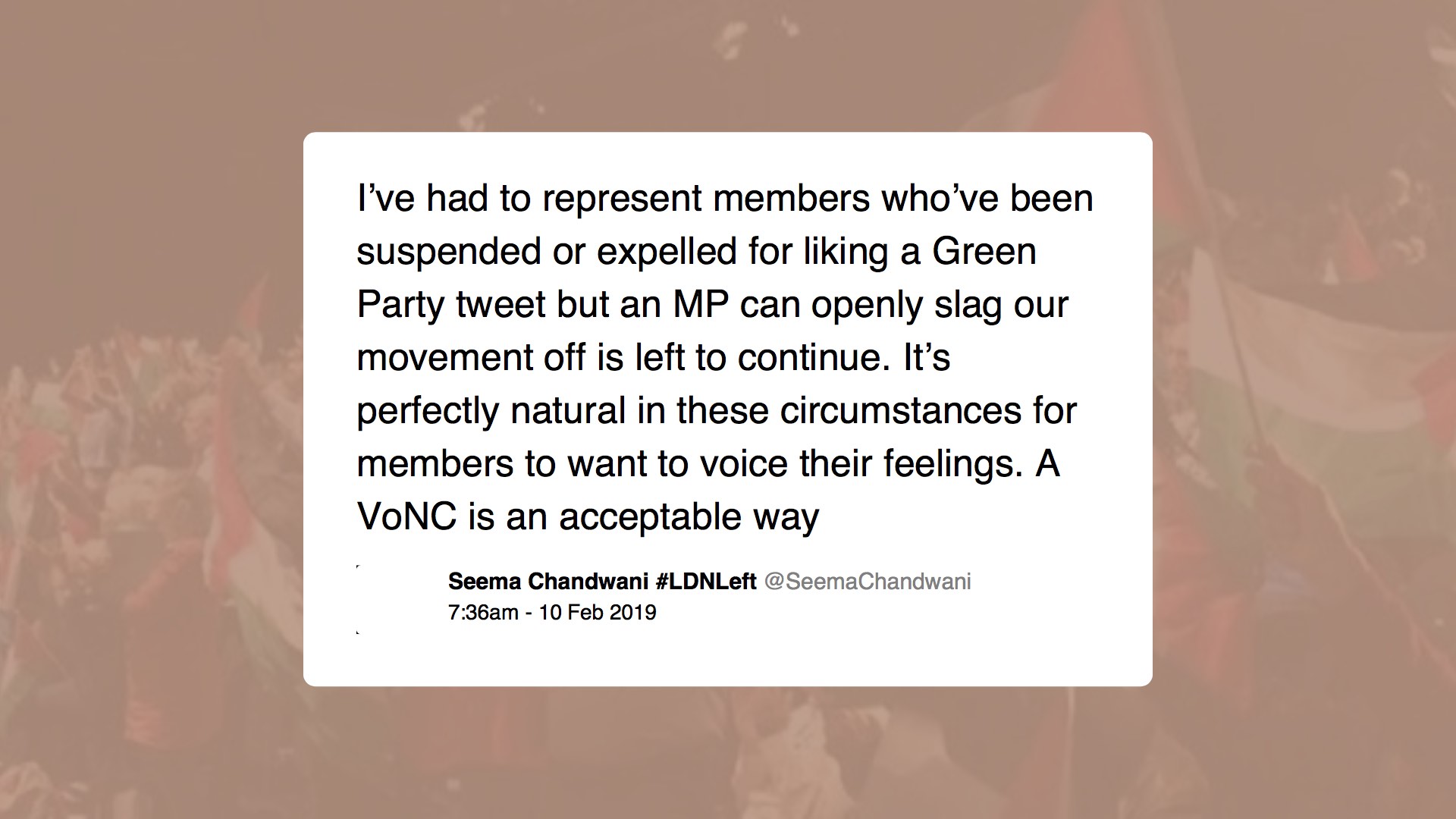 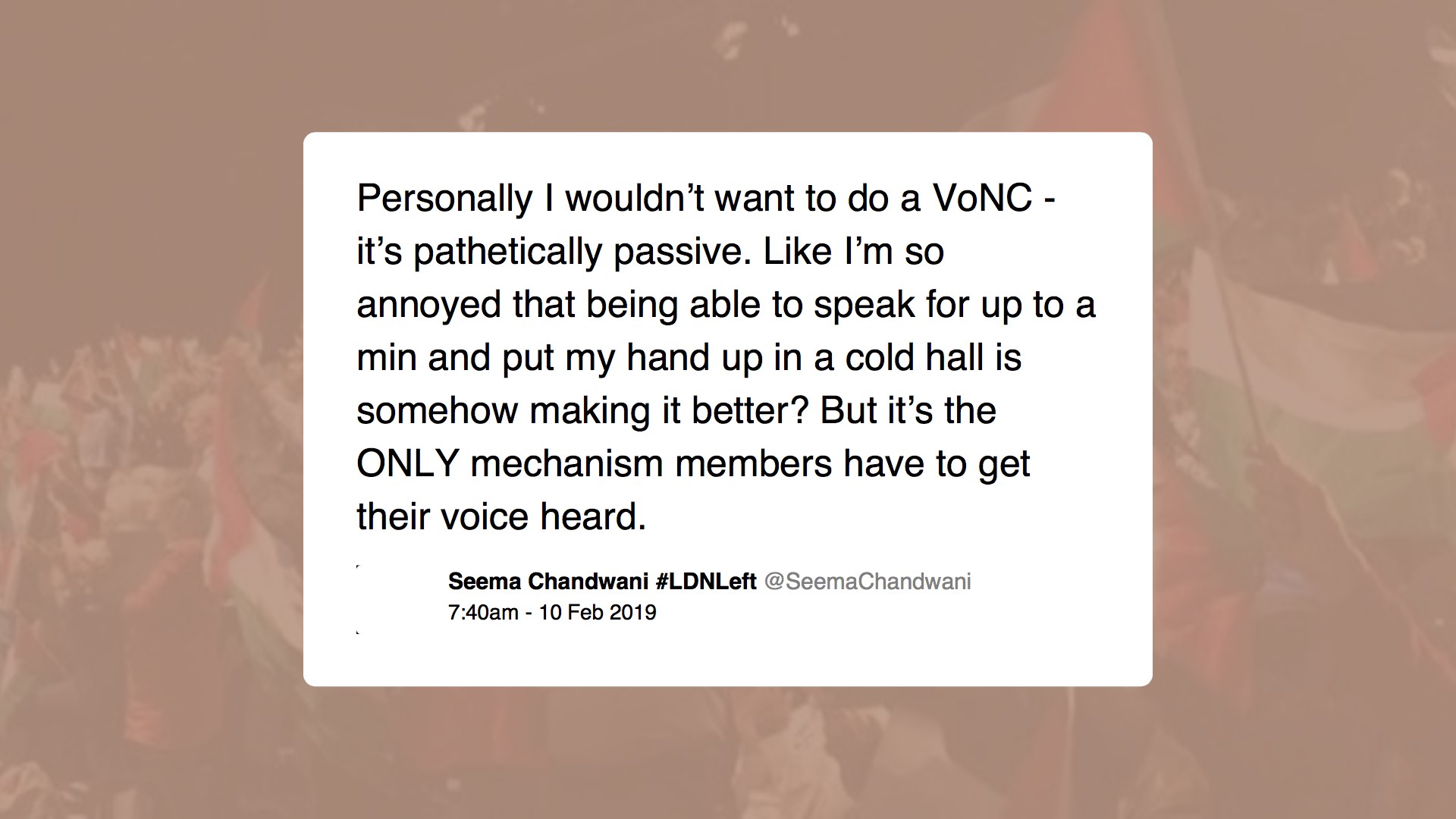 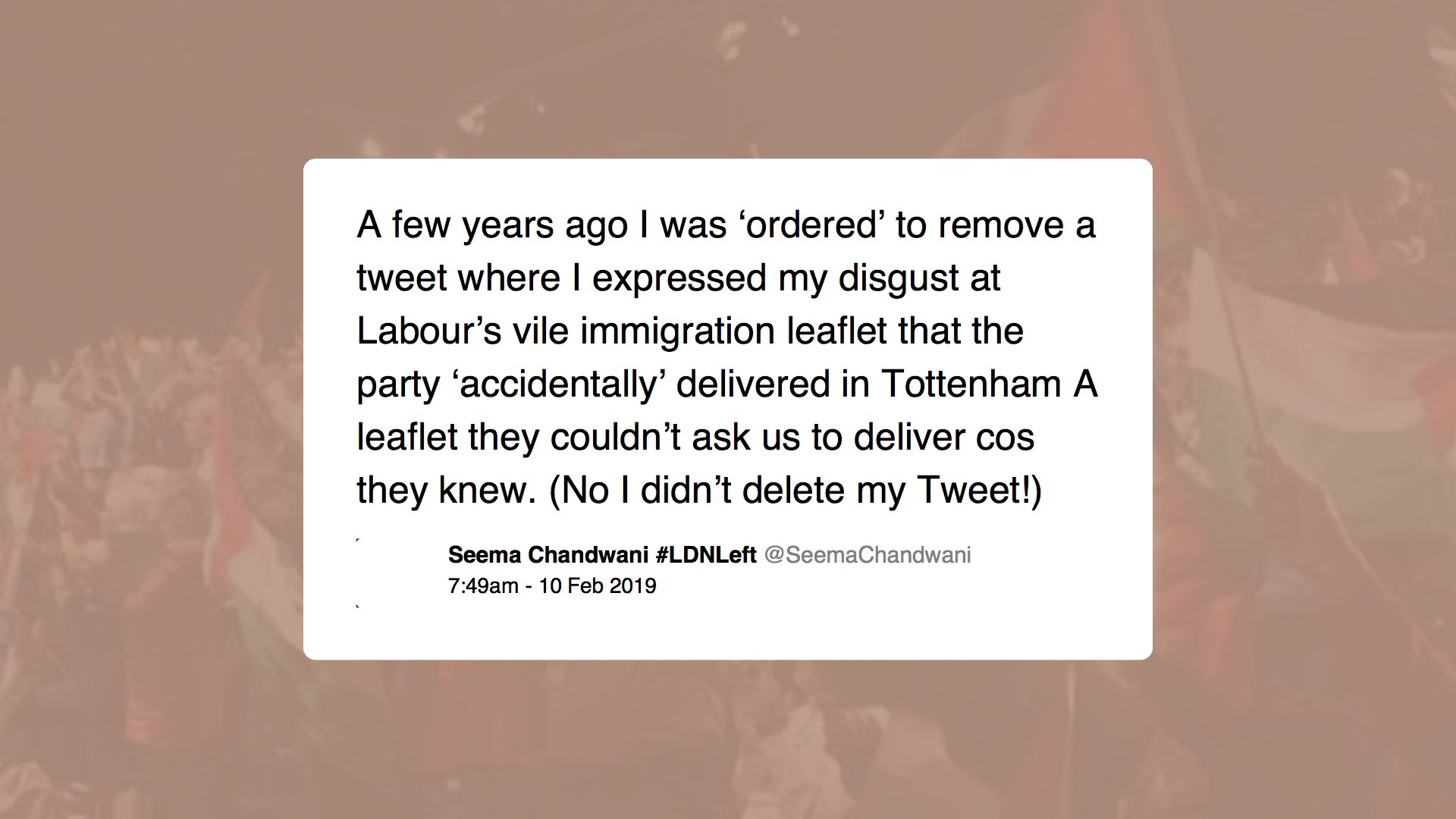 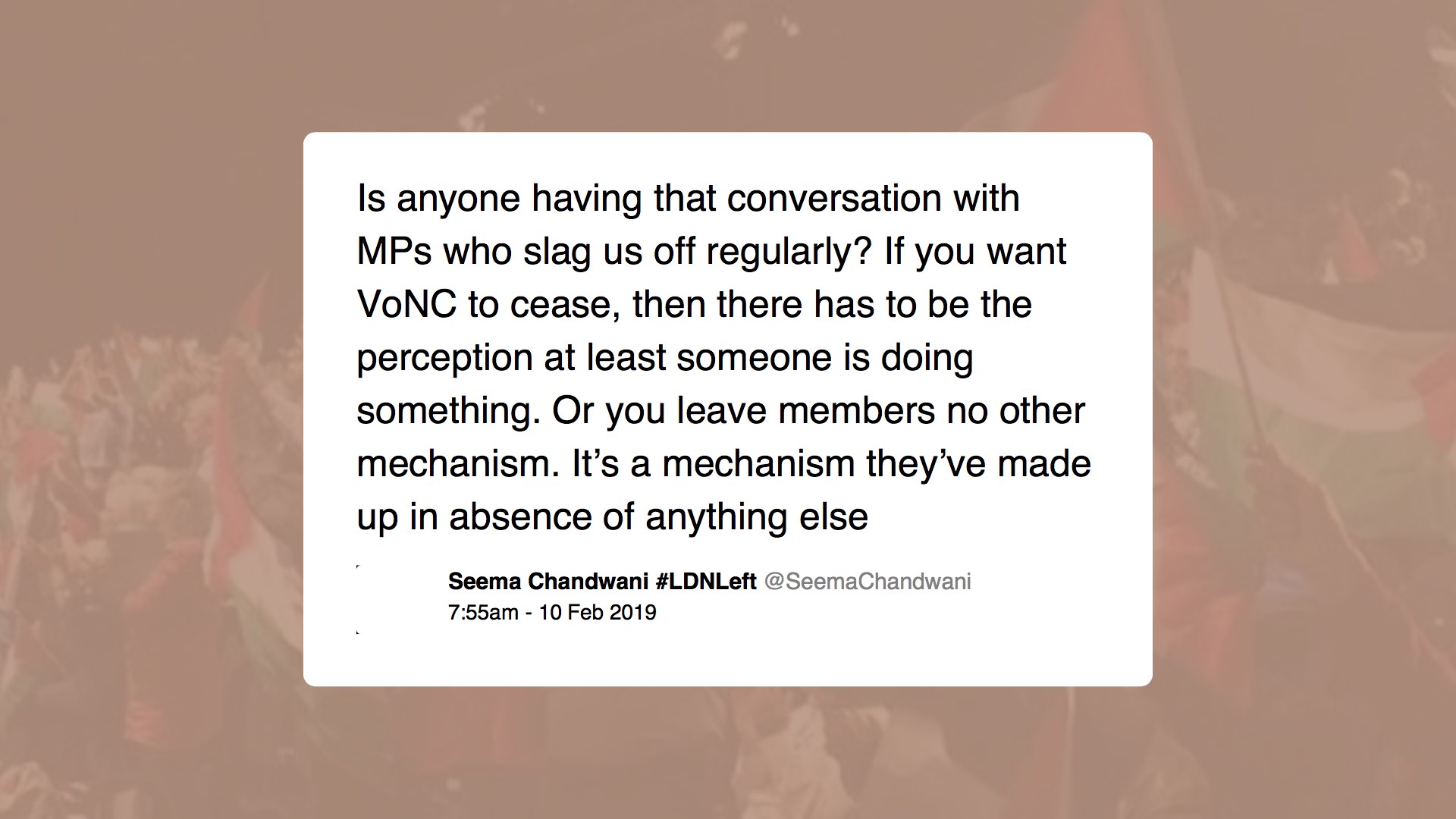 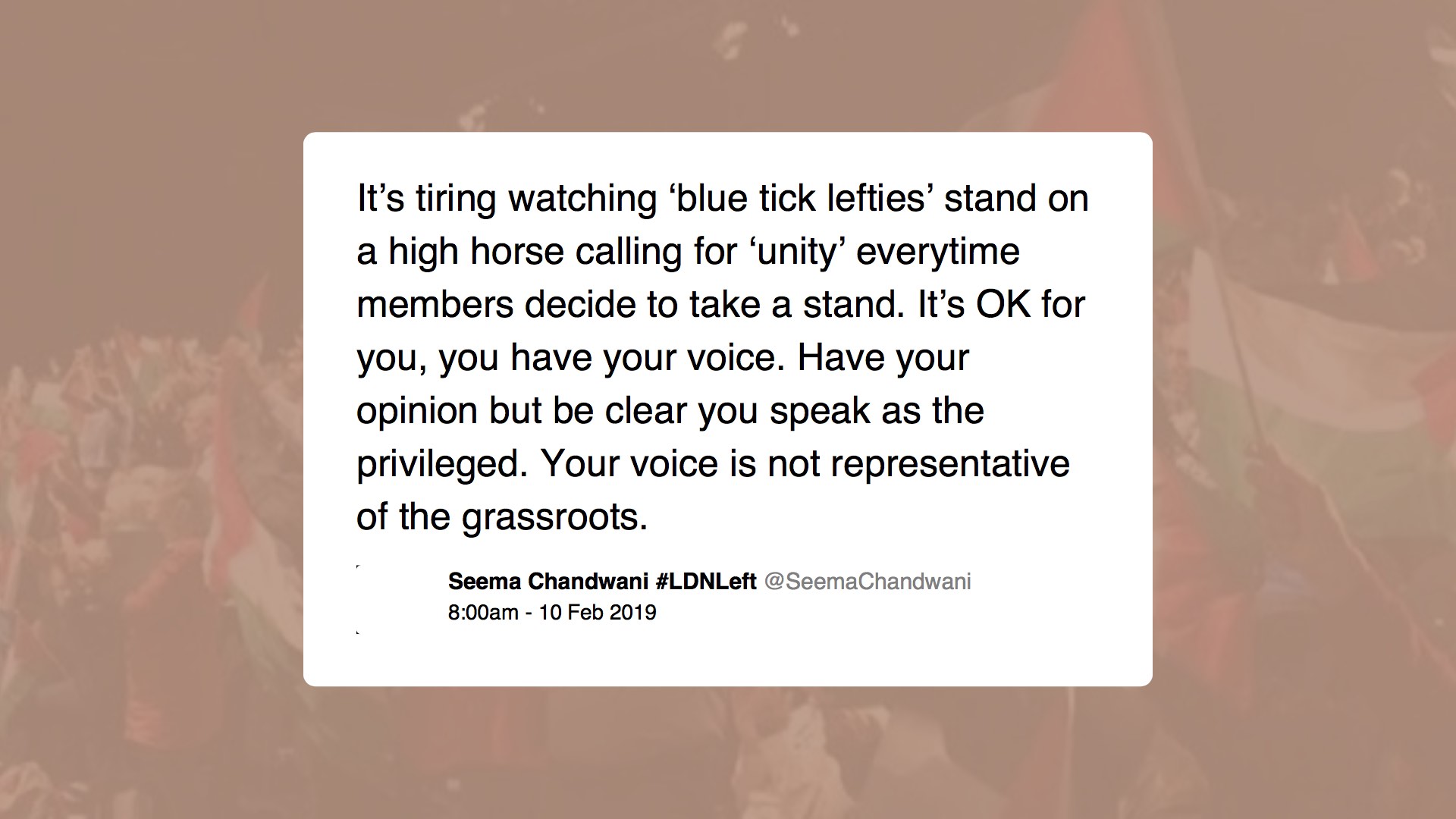 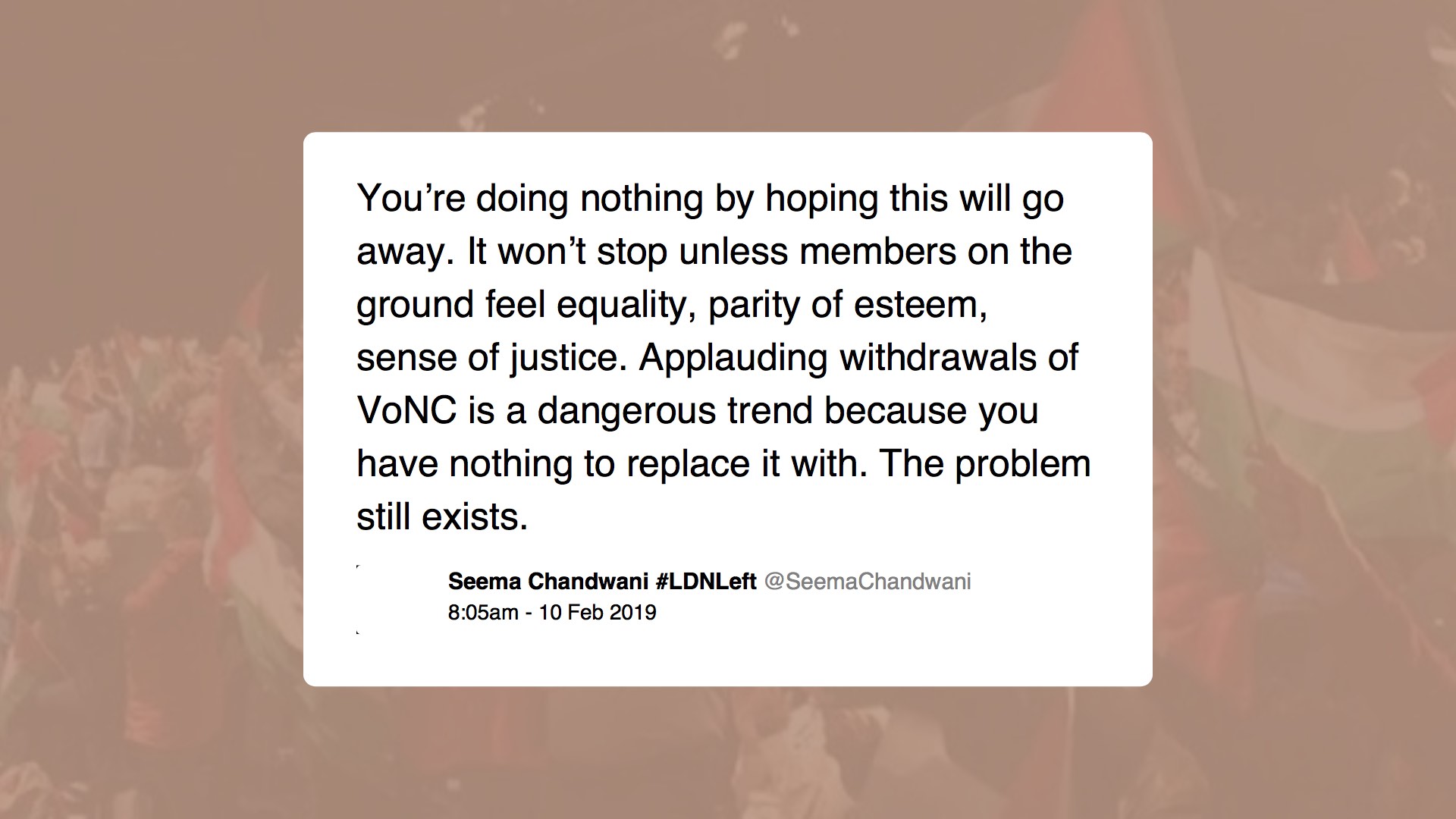 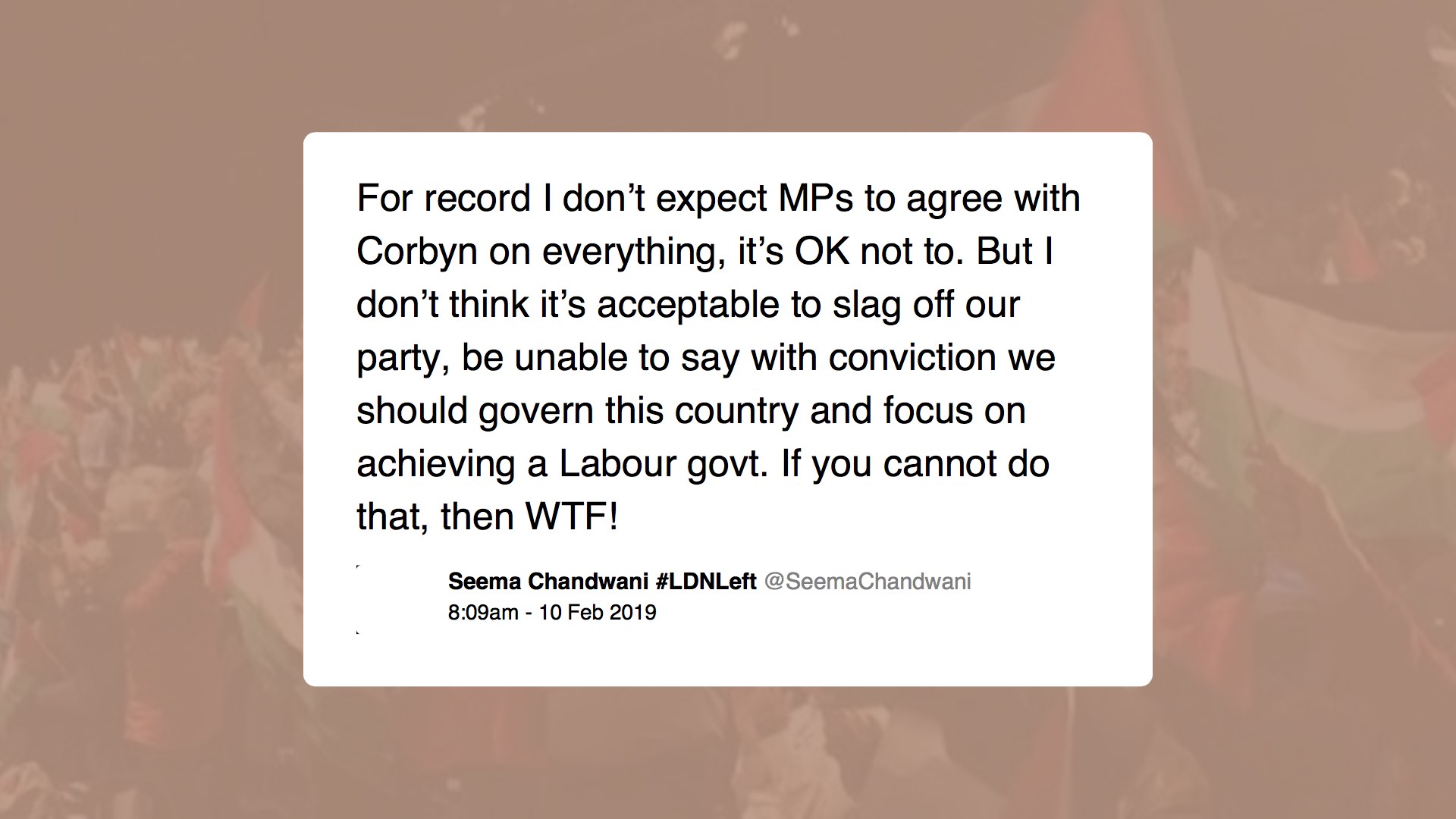 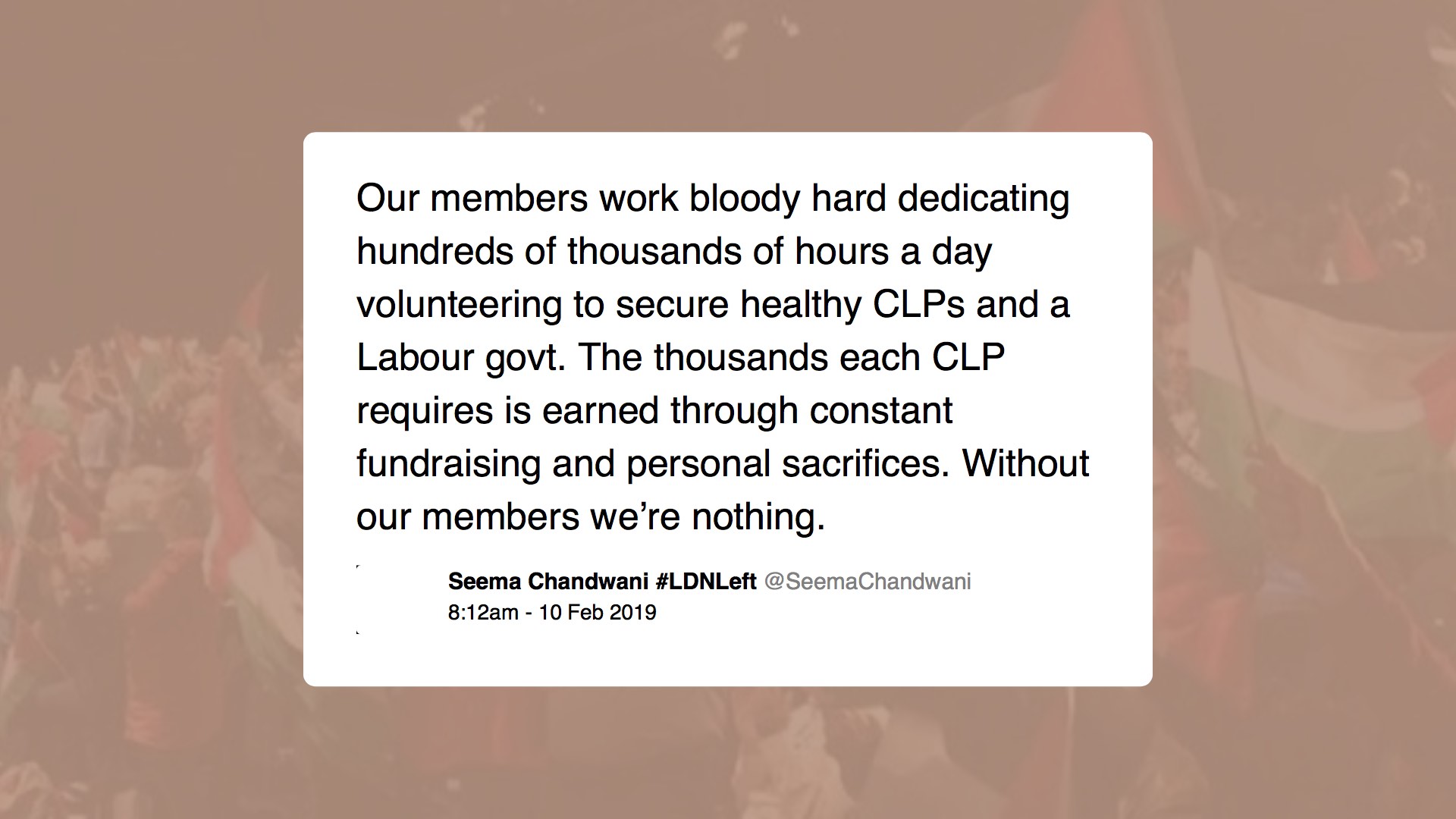 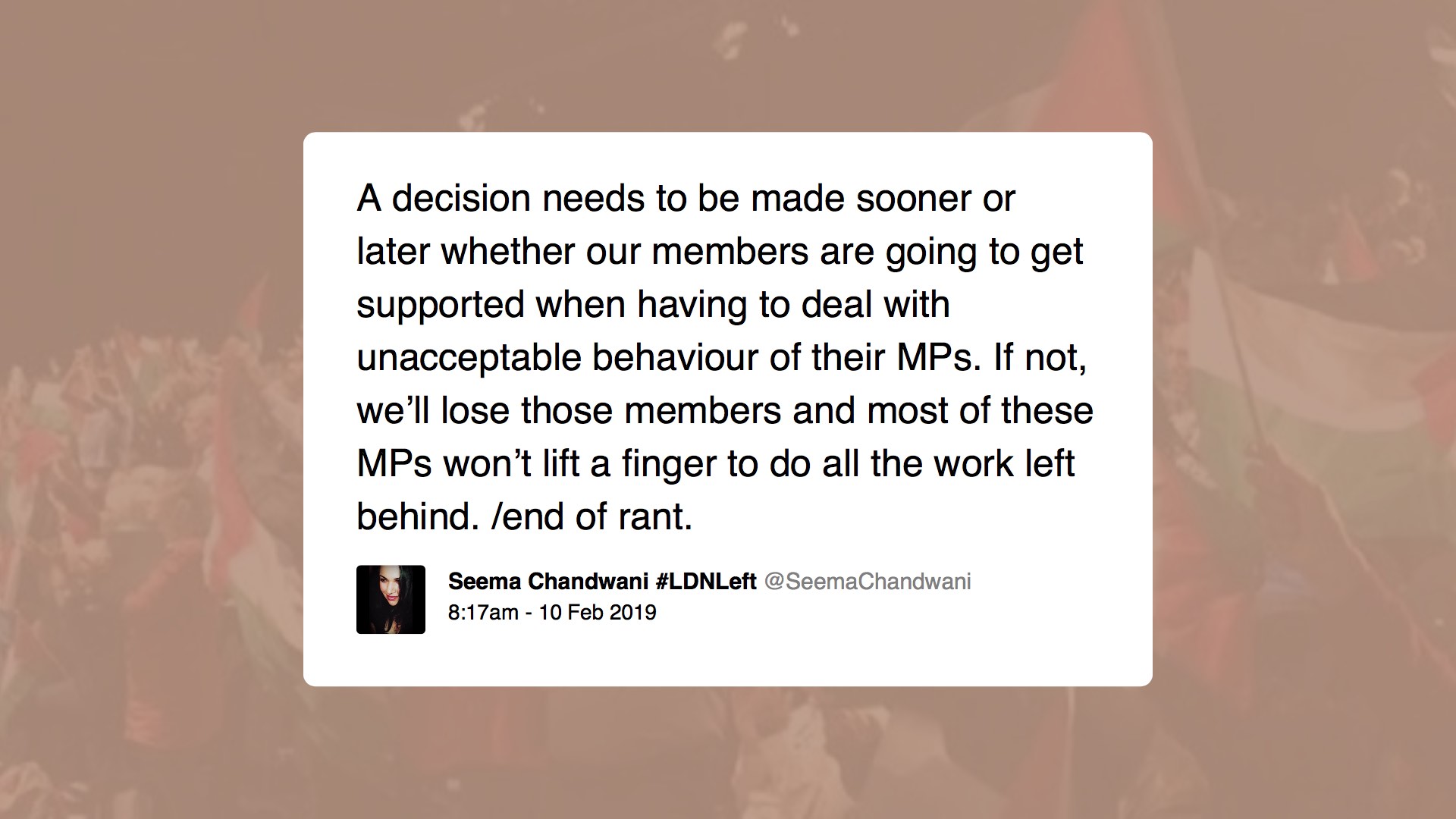 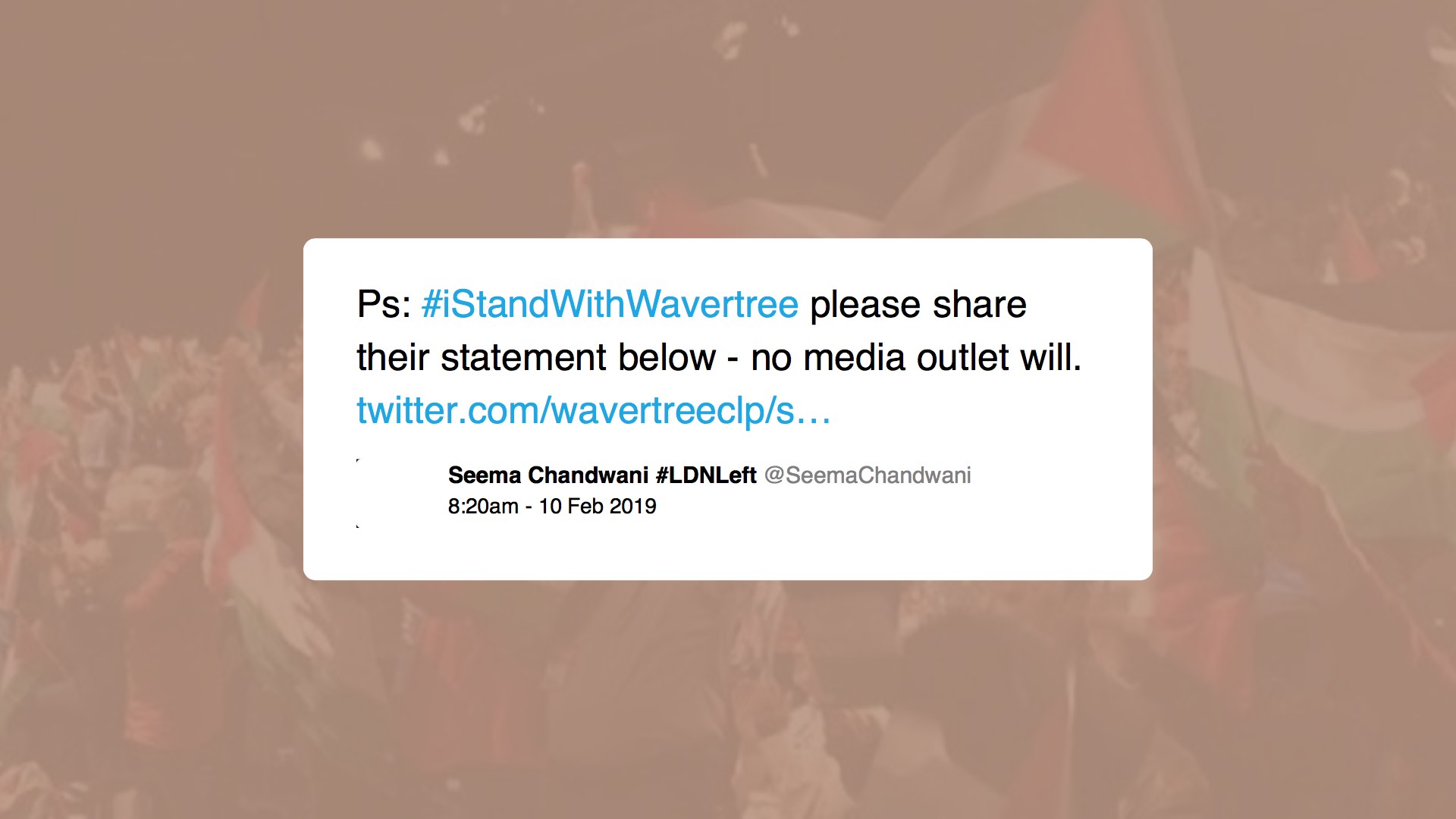 Chandwani has also spoken elsewhere on the importance of democratising the Labour party:

She previously received 109,763 votes to become a member of Labour’s National conference arrangements committee (CAC) which organises Labour’s annual conference. This was the most votes ever for an Asian woman in a UK election.

Is the Labour party truly democratic?

Is the Labour party under Corbyn a truly democratic member-led organisation? With Labour members called ‘bullies’ for democratically holding to account MPs who repeatedly appear to work against their party, the answer is surely no.