Two people arrested after the Home Office is 'found guilty' of 'murder, rape and torture' - The Canary 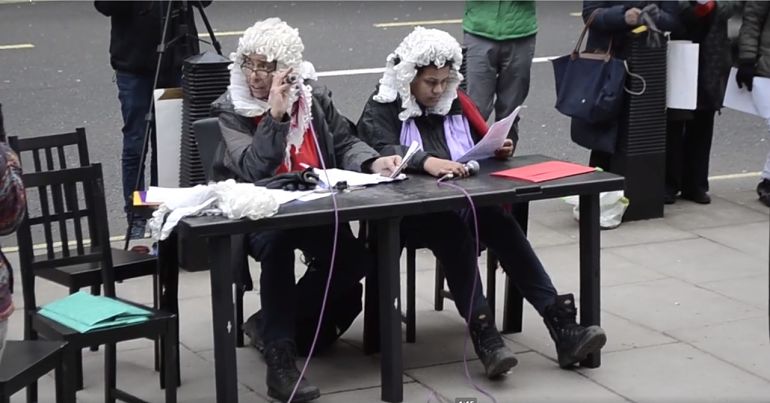 On Monday 11 February, campaigners put the Home Office on trial over its immigration policies and the hostile environment. They found it guilty of “murder, torture, rape, rampant racism, and upholding of neocolonial power”:

Following the guilty verdict, the Home Office was sentenced to ongoing direct action for its crimes. And the sentence was quickly put into effect. On Wednesday 13 February, the Home Office’s headquarters in Marsham Street were blocked for three hours. According to a press release from End Deportations:

workers were forced to queue alongside fountains dyed red representing the cruel and inhumane violence of deportations, detention centres and the hostile environment.

A coalition of groups is organising the protests – All African Women’s Group, Women of Colour/Global Women’s Strike, Lesbians and Gays Support the Migrants, Black Women’s Rape Action Project, Women Against Rape, Legal Action for Women, and End Deportations. And the groups have a list of 17 demands for a “world without borders”. These include:

They’d also like to see the scrapping of charges for NHS treatment, restoring legal aid for family and private life human rights claims, and restoring the rights of the Windrush generation.

Alistair Tamlit, from End Deportations and part of the Stansted 15, explained why the Home Office was put on trial:

We are sentencing the Home Office to ongoing direct actions for war, murder, torture, rape, rampant racism, and upholding of neocolonial power. Last week the Home Office forced around 30 people on the first charter flight to Jamaica since the Windrush scandal, one of whom was a 23-year-old who was ripped from his family.

It would appear nothing has been learned since the scandal and nothing has changed. The fact that the Home Office continues with these brutal practices just shows how callous the system is, and how it needs to be stopped.

Meanwhile, a spokesperson from Women of Colour / Global Women’s Strike highlighted the “racial bias” in the Home Office’s actions:

Thankfully, at least 20 people had their flights cancelled, due to public outrage. This included some women from Yarl’s Wood. The Home Office tried to discredit the 40 people due to be deported and undermine public support, by calling them “foreign criminals”. But proven ‘racial bias’ in the criminal justice system means that people of colour are 17.5 times more likely to be stopped by police and three times more likely to be charged and get custodial sentences. It’s criminal for the Home Office to then strip people of their rights and deport them.

Meantime, the Windrush scandal continues. The Home Office will not say how many have been illegally deported. Few, if any, people have been compensated for what they suffered and thousands are still in limbo waiting for their status to be confirmed. Some have tragically died.

Flora, from the All African Women’s Group, spoke about the distress of deportations:

We are distraught at our sisters and brothers being deported in this way. Our members include Windrush descendants and others from Commonwealth countries whose families were invited to help re-build Britain and have made huge contributions to life here. They raised families and fought racism, and now face the hostile environment.

And Flora is clear the deportations must stop:

We all have a right to be here because of the trillions of pounds of wealth stolen from our home countries, starting with the millions of people abducted during slavery. Deportations must stop, and detention must end — not just be limited to 28 days as some are calling for, but end completely.

But she also offered hope of things changing through public pressure and people coming together:

But we are coming together from different countries, finding out what we have in common – public outrage is growing at the way we are being treated.