If the army opposes child soldiers, why does it recruit them itself? - The Canary 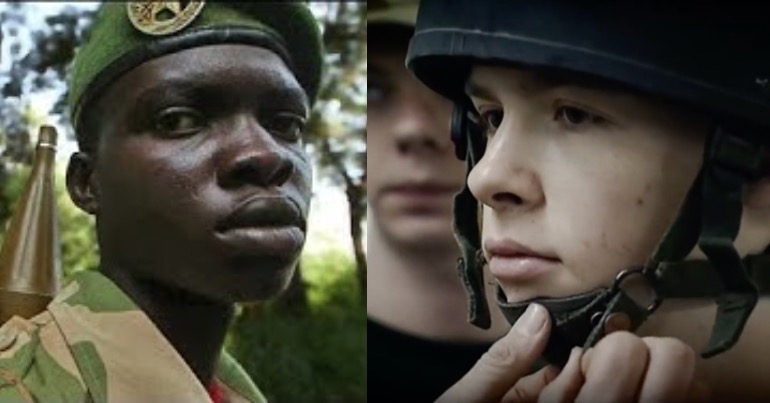 The government claims to be opposed to child soldiers

‘Red Hand Day’ is an international day held in opposition to the use of child soldiers across the world. This moving account of a former Sudanese child soldier illustrates the problem:

This is the true story of a child soldier’s incredible escape from armed forces in South Sudan.#ChildrenUnderAttack #RedHandDay pic.twitter.com/mAlQULKiIc

And the problem is acknowledged and pursued by the international criminal court (ICC):

Defence minister Lancaster expressed his support for the initiative:

Defence Minister Mark Lancaster is supporting the International Day Against the Use of Child Soldiers, also known as #RedHandDay #ChildrenNotSoldiers pic.twitter.com/Ix9hFJDOeH

In conflict zones across the world children are having their youth snatched away from them. And instead of going to school or playing with friends, they are being handed a gun and forced to risk their lives for causes they don’t even understand. Earlier this month the MoD launched a policy setting out how we can tackle this issue among others.

After referring to the problem in other countries such as the Democratic Republic of Congo, he later said:

But if Lancaster and the MoD can recognise this problem in other countries, why not in the UK?

Good to hear the Defence Minister now supports our campaign to raise the UK military recruiting age to 18.

If the UK wants to be taken seriously on opposing child soldiers, it needs to raise its own military recruitment age to the legal age of majority, 18. Red Hand Day is not only about children who are sent to fight in wars, but also about children being recruited and trained by fighting forces – which we do in the UK.

And Forces Watch outlines the problem in detail on its website, describing how:

the minimum age for enlisting in the UK armed forces is 16.  The UK is the only country in Europe and the only country on the UN Security Council to recruit 16 year olds into its armed forces and is one of fewer than 20 countries in the world which recruit from the age of 16 years.  Those who sign on when 16 or 17 must serve until they are 22.

It further explains how:

The recruitment of minors has been criticised by the United Nations Committee on the Rights of the Child, Parliament’s own Joint Committee on Human Rights and a number of charities. Phasing out recruitment of under-18s would bring the UK into line with international human rights standards.

Forces Watch also claims that people as young as: “15 years, 7 months can apply for the Army”. And, that those young people recruited are overwhelmingly “living in disadvantaged communities, with many recruits joining as a last resort”.

According to Richard Clarke, director of Child Soldiers International:

By recruiting at 16, the UK isolates itself from its main political and military allies and finds itself instead sharing a policy with the likes of North Korea and Iran. These are not states which the UK would normally want its military to be associated with.

And as of 2014, according to the Independent, “More than one in 10 new Army recruits are boy soldiers of just 16 years old”.

History of the UK’s use of child soldiers

Although many slipped through the cracks to join in combat, the official combat age for overseas troops during WW1 was 19 and the recruitment age 18. However, a letter sent in 2013 from Child Soldiers International to the then-minister of state for the armed forces, Mark Francois, claimed that in later conflicts, “17-year-olds were routinely deployed into combat. Some were killed.” These conflicts included the Balkans, the first Iraq war, and more recent conflicts in Afghanistan and Iraq.

Current recruitment policy channels the youngest, most disadvantaged recruits into the most dangerous frontline combat roles. Those recruited at 16 have faced double the risk of fatality of adult recruits throughout the conflict in Afghanistan.

According to a report by Child Soldiers International titled Why 18 matters, young recruits are at greater risk. This includes higher risk of bullying, suicide, sexual violence, mental health problems and heavy drinking. This is significant, as the report argues:

States often suggest that because parental consent is required and child recruits are not usually used in armed conflict, their rights are unaffected. To the contrary, this report shows that the practice causes material harm to children and routinely violates several of their fundamental rights.

And the harm caused by recruiting young people can extend beyond harm to themselves.

research in the UK and US has found that young people are more likely to commit violent offences after they enlist than before. A popular belief that joining the army prevents anti-social behaviour is not supported by the available research, which points in the other direction.

So why recruit so young?

The above points raise the question of why the MoD recruits so young. There are several possible explanations for this. Firstly, as the Child Soldiers International report suggests, young minds may be easier to mould into soldiers. This is because:

initial training [is] a process of psychological conditioning, which ensures that recruits obey all orders by reflex, enables them to kill other people, and secures their loyalty to the military system.

Or what one US military officer cited in the report describes as “‘intense indoctrination’ under sustained stress”. This is significant because:

Since the capacity of adolescents for rational evaluation and decision-making is compromised in conditions of high stress, initial military training capitalises on a specific developmental vulnerability to re-shape their attitudes and behaviours for military use.

And as The Canary previously covered, the documentary War School has exposed how UK army recruiters deliberately target children to boost recruitment. Recruitment, after all, is in severe decline.

The public is ready for change

Polling in 2014 showed that the public overwhelmingly supports increasing the recruitment age. 52% of respondents supported a minimum age of 18. 14% said 16 and 8% 17.

It’s not acceptable for the UK government to take the moral high ground on child soldiers while it is recruiting vulnerable young people itself. But beyond that, we must challenge a national culture of militarism that glorifies war and foreign interventions as normal parts of British life.