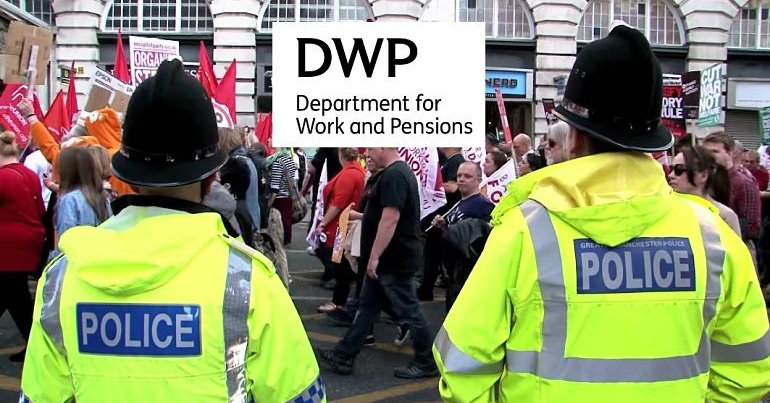 Greater Manchester Police (GMP) has admitted having a pact with the Department for Work and Pensions (DWP), according to Disability News Service (DNS). This “sharing agreement” sees the force hand over details on protestors to the government department.

Disabled activists are calling for a public inquiry into the scandal. Because, although GMP isn’t the first force to confirm such collaboration, it is the one which polices the Conservative Party conference.

In December 2018, Lancashire Police confirmed it “had passed on information” about disabled protestors to the DWP. The disclosure followed the release of a video by the Network for Police Monitoring (Netpol). It revealed police were sharing footage of disabled anti-fracking protesters with the department.

GMP has now told DNS that it too passed on information about people taking part in anti-fracking protests at Barton Moss, Salford in 2013/14. It says that information did not include video footage. But GMP did confirm that it also shared information with the DWP from other protests which were unrelated to fracking. A spokesperson said:

As part of a sharing agreement, information about protestors has been passed to DWP but only in the event where concerns have been raised. During the course of our duties, whether this is at protests or not, if any concerns are identified, we are duty-bound to pass these onto the relevant partner agencies in any policing operation.

No-one is deterred from taking part in protests or exercising their right to free speech.

As with any operation, a strategy is put in place in order for us to facilitate peaceful protests with as little disruption to the local area as possible.

The sharing of information is a useful tool for both us and our partners, helping us to build greater intelligence pictures, identify areas of concerns and work better with the communities we serve.

The spokesperson also identified how the “concerns” that trigger information sharing arise. She said such concerns are “identified from intelligence gathering before all protests, reports made by the public and information passed on by police officers on the ground”.

DNS asked the DWP for comment on the force’s claims, which it obtained via a freedom of information request. A spokesperson said:

There is no formal arrangement in place between DWP and any police force for this or other similar scenarios.

The spokesperson did not, however, confirm whether the DWP was therefore accusing the GMP of lying about the “sharing agreement”.

“Enemies of the state”

The force said, it ‘shared’ more than just information on anti-fracking protests. There’s therefore also concern that it could have handed over details about anti-austerity campaigns too. Or, indeed, that it could have shared intelligence from demonstrations at the Conservative Party conference. Because, as DNS reports, GMP has policed four of the conferences since 2010. Andy Greene, a member of Disabled People Against Cuts (DPAC), told DNS:

Using the cover of suspected benefit fraud as a shroud for the targeting of disabled activists is outrageous. These are public services and should be deploying every resource they have to support disabled people to be active and engaged citizens.

Yet, what we see is the use of those resources deployed against disabled people as if we are enemies of the state.

Greene also called for an inquiry into the matter. He said people should know:

Who made the decisions within these services to share this information, when, how were these decisions justified?

Enemy of the people

What successive Conservative governments have done to disabled people over the last eight years is disgraceful. According to the UN, the DWP has ‘gravely and systematically violated’ their human rights. In fact, the UN has produced numerous reports on human rights abuses by this government. As if that’s not enough, it now seems disabled people’s fundamental right to freedom of association and speech are under threat too.

The Tory government never ceases to amaze with how much an enemy of the people it truly is.