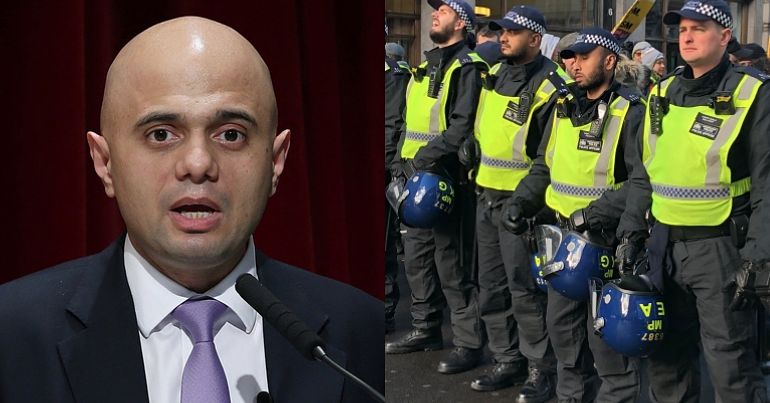 With Brexit taking up so much parliamentary time, it’s easy to get distracted and forget that the government can still introduce new laws. Home secretary Sajid Javid might be hoping that this is the case with his new proposals to “tackle illegal traveller sites”. Because not only will the new police powers risk further criminalising the Roma, Gypsy and Traveller communities, they also potentially threaten our right to protest.

“Ill thought out and rushed”

The vast majority of travellers are law-abiding citizens – but illegal sites often give an unfair, negative image of their community and cause distress and misery to those who live nearby.

There is a widespread perception that the law does not apply to travellers and that is deeply troubling.

The result of our initial consultation was clear – people want to see greater protection for local communities and for the police to be given greater power to crack down on trespassers.

The proposals currently under review include: lowering the number of vehicles involved in an illegal encampment from six to two; giving police the power to move people camped by a road; and criminalising trespass when setting up a camp.

But a spokesperson from Traveller Times hit back, saying that even the police didn’t want these new laws:

These are powers that even the National Police Chiefs Council said they did not want in their submission to the consultation on this late last year.

We believe that this is an ill thought out and rushed out response to a national consultation that was deeply flawed in the first place.

But campaigners are also worried that any new legislation criminalising trespass will impact on protest. Protest camps have a long tradition in the UK, from Greenham Common and road protests to today’s anti-fracking camps. Kevin Blowe, coordinator of the Network for Police Monitoring (Netpol) told The Canary:

As well as the negative impact on travellers, we are extremely concerned proposed changes in the law will have a knock-on effect of further undermining the right to protest against environmental destruction caused by fossil fuel industries.

Allowing officers to remove trespassers from camping beside a road would severely restrict, for example, the rights of anti-fracking campaigners to conduct the kind of daily monitoring of oil and gas drilling sites that has been so important in exposing the companies’ repeated breaches of environmental standards.

We can foresee the police gleefully seizing on proposals to criminalise trespassing when setting up an encampment on private land, which is currently a civil matter. It would enable local police commanders to suppress protest camps, drag protesters into court and disrupt their campaigns at an early stage.

“Not targeted at protesters”

Speaking to The Canary, a spokesperson for the Home Office said that any new law:

will not be targeted at protesters or demonstrators.

But Blowe is unconvinced:

As happens so often when police are given new coercive powers, the most vulnerable people in society are affected first. But soon new laws are used in new and increasingly illiberal ways on a growing number of people.

These fears are not unfounded. The police have used legislation such as terrorism stop and search powers and dispersal orders for anti-social behaviour against protesters – even though the legislation was never intended for such use. Research by Aidan O’Sullivan for Liverpool University gives examples of:

how legislation, intended for vastly different uses than regulating public order and citizens engaging in protest, can extend far from their original intention.

In 2015, reports from the Equality and Human Rights Commission (EHRC) found that Gypsies and Travellers faced “multiple inequalities” and that their “life chances” had declined since 2010. This is a result of increased “deprivation, social exclusion and discrimination”. There’s also a “national shortage of suitable permanent and transit Traveller sites”.

Meanwhile, a 2017 survey by the Traveller Movement found that:

Javid’s new proposals will just add to this discrimination and prejudice, introducing new laws that even the police do not want. And the potential impact on protest camps is extremely worrying.

It’s time for all of us to come together and oppose Javid’s plans.

Featured image via Flickr/Jeon Han and author’s own