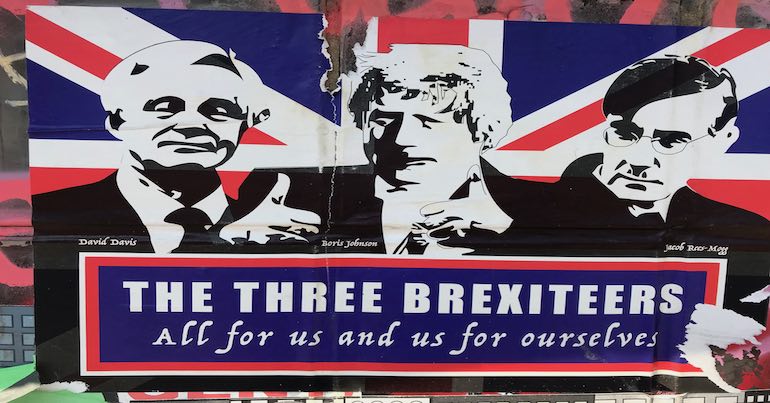 Over the last three years, Theresa May’s government has shown again and again that it’s incapable of doing anything other than blaming others for its own inability to form a coherent Brexit policy. One country that’s come in for criticism is my own: Ireland. The constant ignorance of and threats to Ireland may have gone relatively unnoticed by the wider population in the UK; but that’s not the case here. Many have noted what’s been hurled in our direction over the last few years. And with a mixture of anger and incredulity, we look on in wonder. Because the leaders of Brexit seem intent on burning everything to the ground in the name of their version of freedom.

As The Canary has previously reported, Brexit supporters in the British parliament operate under the illusion it’s still 1845; and like then, Irish people can be ignored or cast aside as an irritation. Brexiteers seem to believe, regardless of the consequences, that what they do is always righteous and proper. When they get a reminder that it’s 2019, annoyance appears to be the most generous interpretation that we could give to their reactions.

One former Tory minister was anonymously quoted as saying: “The Irish really should know their place.” The secretary for Northern Ireland, meanwhile, admitted that she didn’t know that nationalists don’t vote for unionists and unionists don’t vote for nationalists in the north of Ireland. And Jacob Rees-Mogg suggested there was always the facility to “have people inspected” at the border between the north and south of Ireland, just as had been the case during the Troubles. In response, Irish deputy prime minister Simon Coveney said it was “hard to believe that a senior politician is so ill informed about Ireland”. Comments like these engender a sense of wonder and outrage amongst Irish people.

It seems that the concept of Ireland having interests separate from British notions of Brexit is beyond the comprehension of British elites. We are to do as we are told and not get in the way like the good ‘Paddys’ we once were. We should ‘know our place’. But it also brings forth a sense of nationalism that’s been dormant in the Irish psyche for a long time.

Our nationalism was dormant because of the Troubles. Any nationalistic sentiment was seen as a potential source of support for the IRA or Sinn Féin. The government and the Catholic Church had to repress it. With the Good Friday Agreement, the repression eased, but it still remained given our need to stay on friendly terms with the UK. It was also important to keep it repressed because of the need to ensure the success of the Good Friday Agreement itself. Ideas about reunification had to be put on hold.

Now, though, intentional ignorance on the part of Brexiteers has given us an opening to discuss past injustices that the British were responsible for in Ireland. It also gives us an opportunity to ask if anything has really changed. Do British elites look at us as equals? Or is there an imperialism that undergirds their view of the world; an imperialism which defines Ireland, its history, and its people as being beneath them; and an imperialism in which the world owes the British elite a penance for its lack of the appropriate British perspective?

For Irish people, that means we should know our place and not stand in the way of more important British plans. This is similar to the Irish experience of British governance in the 19th century. During that time, food and economic relief could not get in the way of British free-market policies. These policies were in large part responsible for the starving and emigration of millions of Irish people. And today, a peace treaty that ended violence on both islands is also an inconvenience. Brexiteers want to cast it aside because it stands in their way. A supposedly greater venture awaits them.

What this greater venture is only the likes of Rees-Mogg know. But it appears to be some attempt at restoring the edifice of the British Empire. It also seems to be an attempt to make countries like Ireland remember their place in the world order. Likewise, the European Union must be made to remember the power of the former empire.

Just two days ago, it was announced that a British aircraft carrier was being sent to the South China Sea. The reason for this is to apparently show that Britain is “ready to use hard power”, according to defence secretary Gavin Williamson. This is the last cry of an elite desperate for a return to the old days where they were free to reign. In their minds, Brexit will also give them a chance at returning to this ‘high point’ of British history. If only Ireland didn’t stand in the way.