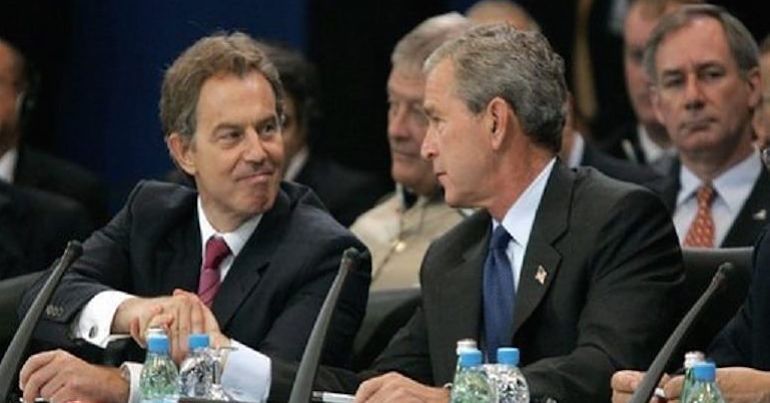 There are clear and disturbing parallels between the events that led to the 2003 invasion of Iraq and the current frenzy promoting regime change in Venezuela. From the state actors to the massive disinformation campaign, Washington and its “coalition of the willing” appear to be following the same old imperialist formula.

The Canary spoke to activist journalists Mike Prysner and Fiona Edwards about the parallels between the lead-up to the invasion of Iraq and current events in Venezuela. Prysner was 19 years old when he was deployed to Iraq in March 2003. He is now an anti-war activist, producer and writer for The Empire Files, and co-host of the Eyes Left podcast. Edwards, meanwhile, is a national officer of Stop the War coalition (a central organising force against the Iraq invasion) and a writer on Latin America.

The biggest parallel I see at the moment is the creation of a pretext for US invasion on two separate fronts; the first being the rhetoric of a ‘national security threat’. Like with Iraq, the administration is building a case that Venezuela actually poses a threat to US security.

On 7 February, US secretary of state Mike Pompeo told Fox News that “Hezbollah has active cells” in Venezuela. This is today’s equivalent to false and exaggerated claims surrounding Iraq’s WMDs and links to Al Qaeda.

To me, [Pompeo’s claims] are not taken seriously, but neither were WMDs in Iraq…. It was under the ‘humanitarian intervention’ that was ultimately the rationale I went to war with.

Support us and go ad-free
In Iraq and Venezuela alike, the evidence of this humanitarian crisis was something actively manufactured by US policy through the use of sanctions and economic blockade. For the US government to asphyxiate the country for years, then be the saviors, really exposes that their policy never had anything to do with what was best for its people.

Prysner noted that US sanctions on both countries failed to have the desired effect of creating sufficient misery to cause the civilian population to overthrow their own government:

In both countries, the opposition factions backed and funded by the United States are totally incapable of taking power themselves – in Venezuela’s case, the opposition has been unable to win the battle of democracy [losing the vast majority of democratic elections over the past 20 years].

Edwards added to this by pointing out that:

The current stage of the US offensive against Venezuela is to apply intense political and economic pressure. On the economic front, the US is trying to starve and kill the Venezuelan people with crippling economic sanctions that a United Nations rapporteur has described as possible ‘crimes against humanity’. Brutal US economic sanctions were also imposed on Iraq for more than a decade in the lead-up to the US invasion in 2003.

When the domestic population cannot be coerced to do Washington’s bidding, Prysner attests that the US turns to armed violence:

For [US president Donald] Trump to bring back key Iraq war architects – employing the same imperial rhetoric of an ‘Axis of Evil’ and now a ‘Troika of Tyranny’ – shows that their vision includes the use of brute force like they were willing to do in Iraq.

It is significant that Trump hasn’t even remotely drained “the swamp” as he claimed he would. Instead, he’s got the band responsible for the invasion of Iraq back together again. His national security adviser John Bolton, for example, was one of its strongest advocates – even after no WMDs were found in Iraq. And Bolton is now perhaps the most ardent supporter of military intervention in Venezuela. In November 2018, he evoked Bush’s ‘axis of evil’ speech by calling Cuba, Venezuela and Nicaragua a “troika of tyranny”.

Elliott Abrams, meanwhile, was one of the chief “architects” of the invasion of Iraq. Abrams, who has a long history of “crushing democracy” in Latin America, is now responsible for US “efforts to restore democracy” in Venezuela. Florida senator Marco Rubio also maintained for years that, despite having no WMDs, invading Iraq was the correct decision. And today, he’s telling Venezuelan military leaders to “make a choice, before a choice is made for them”.

Prysner also slammed the mainstream media, which has been predictably supportive of intervention:

Their help was essential to paving the way for war on Iraq, and they are again dutifully playing their part. This includes twisting the truth, outright lies (like that Venezuela is a ‘dictatorship’), and the deliberate omission of facts (like the fact that Venezuela’s opposition is right-wing and carrying out lynchings).

The mainstream media was crucial to the Iraq war effort through uncritical acceptance of: a) the West’s ‘legitimacy‘ to intervene; b) the West’s noble character and intentions; and c) the accuracy of governmental ‘intelligence‘. Today, journalistic errors on Venezuela consistently strengthen the case for a foreign intervention that most Venezuelans don’t want. And once again, ‘liberal’ outlets like the Guardian and BBC are among the worst culprits.

The media-backed disinformation campaigns, meanwhile, are consistently directed at a particular type of country. In Prysner’s words:

It is no coincidence that both countries have vast reserves of oil, and more importantly, nationalized oil… Looking at every conflict my whole life, and the US allies and enemies globally, it really comes down to something more simple [than the level of human rights and democracy in these countries, or threat of attack]: does that country submit to the interests of US capitalism and militarism?

The US wanted control of Iraq’s oil then. And now, they want to get their hands on Venezuela’s oil reserves, which are considered to be the largest in the world and are owned by the Venezuelan state.

Paved by the lies of the Western political and media establishment, the invasion of Iraq caused the country’s destruction and the deaths of over 1 million Iraqis. And Edwards insisted:

These horrific crimes should not be repeated in Venezuela.

Prysner, meanwhile, finished with a sobering message to US troops:

Seeing the same playbook [as Iraq] used to now build a case for war with Venezuela is disturbing… For the past 13 years, I’ve wished I could turn back the hands of time and refuse to have gotten on that plane to Iraq. I hope to tell as many US troops as possible that they have that chance now.

Some commentators say that intervention in Venezuela shows that the Western political and media elites have learned nothing from Iraq. They misunderstand that many of the forces behind Iraq (political and media) consider the war a success. A country that refused to submit to Western capitalism was bombed to smithereens, looted for the spoils, and sold to the public as ‘humanitarian intervention’.

If we can change the narrative surrounding the nobility of Western intervention, the legitimacy of Western imperialism will disappear. Ultimately, stopping war in Venezuela requires cutting through the ocean of lies that led to the invasion of Iraq.

Featured image via the White House